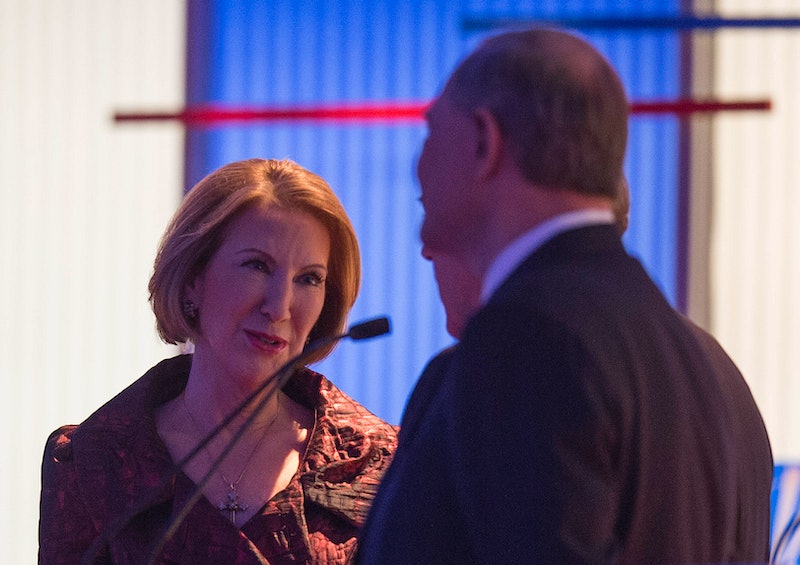 The seventh GOP debate is off to a rollicking start. Yet again, an undercard debate has taken place with lower polling candidates taking the stage at an earlier time. One thing that has changed, however, is the fact that this Des Moines debate marks the first time Jim Gilmore has taken the stage. Due to incredibly low polling numbers, Gilmore had been relegated to sitting the events out at home. He would often live-tweet what was unfolding, offering the former Virginia governor a chance to completely speak his piece without regard for time limits. It's this reason the candidate got a whole lot of grief from his fellow presidential hopeful. Carly Fiorina's fierce eye roll at Jim Gilmore pretty much sums up what we're all thinking when Gilmore repeatedly complains about being passed over for time.

Gilmore interrupted moderators Martha Maccallum and Bill Hemmer, questioning whether or not they had skipped him and called them out for allegedly allowing Fiorina two extra minutes to answer questions in the form of one-minute time limits that Gilmore felt he hadn't been given. "I just noticed just now you gave Carly Fiorina two one-minute answers in a row. This media across the country is manipulating and shaping and framing this campaign," Gilmore said to the delight of conspiracy theorists everywhere. Fiorina wasn't having it, though.

Fiorina practically guffawed at Gilmore for his claim that she'd been given more time. In fact, the eye roll may have marked the only moment that she even deigned to acknowledge her fellow Republican. It's certainly not like he's posing a major threat in the polls. In one gesture, Fiorina pretty much says exactly what we're thinking when Gilmore rudely comes down on the candidate then the media. The whole complaint is weird and Fiorina has more important things to focus on, such as coming down on Hillary Clinton.

If there's any type of established pattern that has been seen in candidates who complain about an unfair debate structure in which their speaking time is certainly smaller than more bombastic candidates, it's that the gripe certainly doesn't earn them any bonus points. Former Democratic candidate Jim Webb turned pleas for more time into an art form and his statements appear to have outlasted his own campaign. Likewise, Ben Carson's latest complaints have done little to salvage the candidate's dwindling numbers. Gilmore starting off on shaking footing means he really can't risk wiling away the lone chance he's had to show the American people who he is with complaints that are most definitely eye roll-inducing.