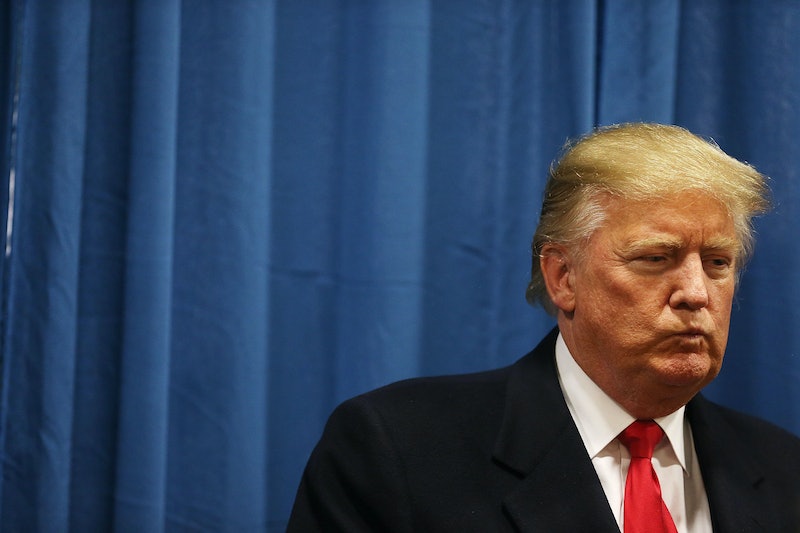 In response to Donald Trump boycotting Thursday's seventh GOP debate, Ted Cruz sponsored a "Ducking Donald" snapchat filter, taking full advantage of the Republican front-runner's absence. The filter featured a yellow rubber duck with blonde hair mocking Trump's signature style and read: "Where is Ducking Donald?" With Trump out of the picture, Cruz took the center podium in the primetime debate and was obviously very happy to attack his rival for missing the event.

Trump chose not to attend the debate in Des Moines because Fox News was hosting, with Megyn Kelly moderating once again. The Republican claimed that the network and Kelly, who he's battled since the very first GOP presidential debate in August, treat him unfairly. Fox News refused to ban Kelly from the forum, and instead released a sarcastic statement asking how Trump could face President Vladimir Putin of Russia and Ayatollah Ali Khamenei of Iran as president of the United States if he can't even deal with Kelly.

Cruz was probably disappointed that he wouldn't get the chance to personally attack Trump to his face on the debate stage days before Iowa voters gather for the nation's first caucuses. So, he did what any presidential candidate seeking attention and millennials' votes would do — he sponsored a Snapchat filter ridiculing his opponent.

Because attacking Trump for boycotting the debate both before and during the event just wasn't enough, Cruz took to social media to get as much out of it as he possibly could. While Trump claimed he didn't need the exposure a seventh debate would give him because his campaign is doing so well, Cruz tried to show that the GOP front-runner was really just avoiding Kelly's tough questions and the other Republicans' criticisms. Playing up that Trump was "ducking" the debate allowed Cruz to show America that he wasn't scared of journalists' probes and was prepared to talk about any subject.

If only the filter worked across America and we could all use the "Where is Ducking Donald?" Snapchat feature at home — that would be very expensive for Cruz's campaign, though. Presidential candidates should really sponsor Snapchat filters more often. We could just eliminate presidential debates all together and have candidates share their views via their individual filters. No? OK, fine.

Love technology? We do too. Listen to Bustle's podcast The Chat Room where we talk about all things related to being a woman on the interwebz:

More like this
How To Support Gun Control Reform Right Now
By Morgan Brinlee and Carolyn Steber
How To Use The Shook Filter On Snapchat, TikTok, & Instagram
By Emma Carey
Taylor Swift, Kerry Washington & More Speak Out On Uvalde Mass Shooting
By Jake Viswanath
The Church Of Scotland Votes To Allow Same-Sex Marriages
By Sam Ramsden
Get Even More From Bustle — Sign Up For The Newsletter