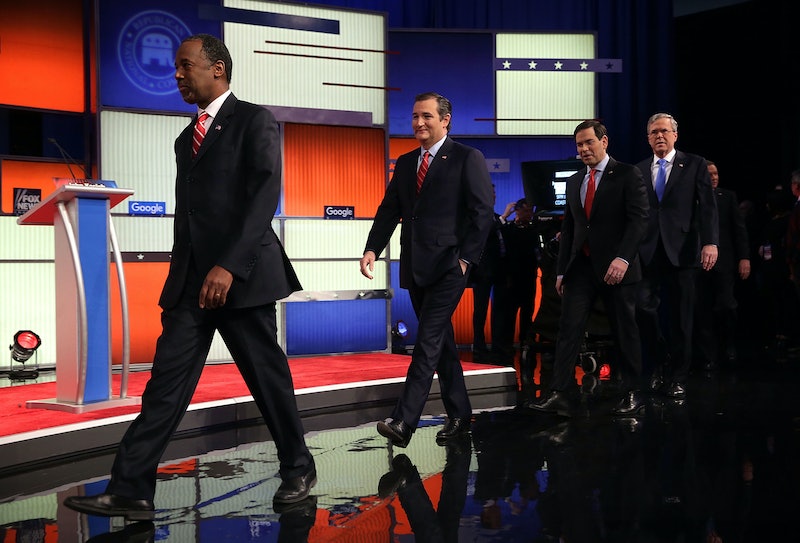 As has become all too standard at these things, Ted Cruz argued with moderator Chris Wallace Thursday night at the GOP debate, and the Texas senator certainly didn't come out on the winning side of it. Early on in the debate, Cruz attempted to elbow his way into an exchange when the moderators wanted to move things along. He was very pushy about it, repeatedly demanding a chance to speak, but Wallace steadfastly refused, and Cruz emerged looking small and petty.

If you've watched one of these debates before, you know the drill: If Candidate A mentions Candidate B's name at any point, Candidate B gets a chance to respond. This rule has been cleverly exploited in earlier debates, like the time Ben Carson demanded an opportunity to respond after Jeb Bush referred to "everybody on this stage." Cruz attempted a similar gambit this time around. What happened is that Wallace, while posing a question to Chris Christie, briefly referenced Cruz. After Christie was finished responding, Cruz attempted to interject, because his "name was mentioned in that question."

But Cruz was immediately called out by, of all people, Jeb Bush.

"I was," Cruz responded.

After some crosstalk between Wallace, Cruz, and Bush, Cruz asked Wallace to repeat his question. And it quickly became clear what Cruz was trying to do.

"It's not my question that you get to respond to," Wallace said. "It's his answer. You don't get 30 seconds to respond to me."

The audience cheered Wallace, and the applause drowned out Cruz's attempts to keep talking.

"Your question was, 'Have you disagreed with —'" Cruz said to no avail. More crosstalk followed, with Cruz attempting to get a chance to talk and Wallace denying him that chance. Eventually, Wallace laid down the gauntlet.

"I know you'd like the argue about the rules, but we're gonna conduct a debate," Wallace said.

And that was basically that. Cruz made a few more futile attempts to pipe in, but the moment had passed. It's not unusual, of course, for candidates to complain about not getting enough time to speak at debates — see Jim Webb for a good example of this — but Cruz pushed very, very hard on this occasion, and lost. Judging by the reaction on Twitter, his pushiness didn't pay off — even among conservatives.

Cruz may be a master debater, but as he learned tonight, bickering with the moderators never makes you look good.