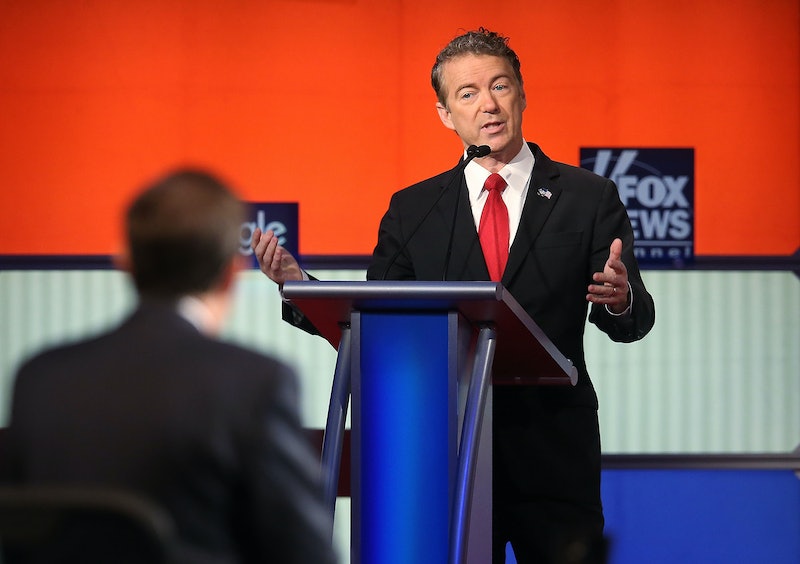 During the seventh Republican presidential debate Thursday, Kentucky Sen. Rand Paul articulately addressed race and policing — an issue brought into the national spotlight by events in Ferguson, Missouri, in 2014 — in one of the most applauded moments of the night. The senator said America's war on drugs had disproportionately affected the black community, citing lessons he learned while working on criminal justice reform in Ferguson.

Paul was, unfortunately, the only candidate asked to respond to a question from YouTube star and veteran Mark Watson regarding the current lack of technologically-advanced body cameras so as to better protect communities like Ferguson. "We currently have better cameras in our pockets than in our precincts — why aren’t we using technology to better protect our communities?"

You know I've supported legislation to allow body cameras. I've been to Ferguson. I've been trying to look for solutions to our criminal justice problem. One thing I discovered in Ferguson was that a third of the budget for the city of Ferguson was being reaped by civil fines. People were just being fined to death. Now you and I and many of the people in this audience, if we get a $100 fine we can survive it. If you're living on the edge of poverty and you get a $100 fine or you get your car towed, a lot of times you lose your job.

Paul earned a round of applause on Twitter when he said he believed America's war on drugs was disproportionately affecting African-Americans. To back up his statement that African-Americans are being "unfairly incarcerated," Paul cited statistics claiming three out of four prisoners in American are people of color despite an even spread of drug use between blacks and whites:

I also think the war on drugs has disproportionately affected our African-American community, and what we need to do is make sure that the war on drugs is equal protection under the law and that we don't unfairly incarcerate another generation of young African-American males. In Ferguson, for every 100 African-American women, there are only 60 African-American men. Drug use is about equal between white and black, but our prisons — three out of four people in prison are black or brown. I think something has to change. I think it's a big thing that our party needs to be part of, and I've been a leader in Congress on trying to bring about criminal justice reform.

Paul, who often appears to be the most sensible Republican candidate onstage, managed to woo even some self-professed anti-Republican viewers with his thoughtful answer on an issue that has captured the attention and concern of people across the nation.

It's unsettling Fox News didn't think the question — the first of its kind to be lobbed at Republican candidates — deserved to be asked of the remaining six men onstage. However, Paul's articulate answer and his willingness to go above and beyond to tackle issues like racial inequality in America's criminal justice system show exactly why the Kentucky senator could be the candidate that allows the Republican party to garner critical supporters in voting groups it has so far found itself largely ostracized from thanks to inflammatory statements from candidates like Donald Trump.