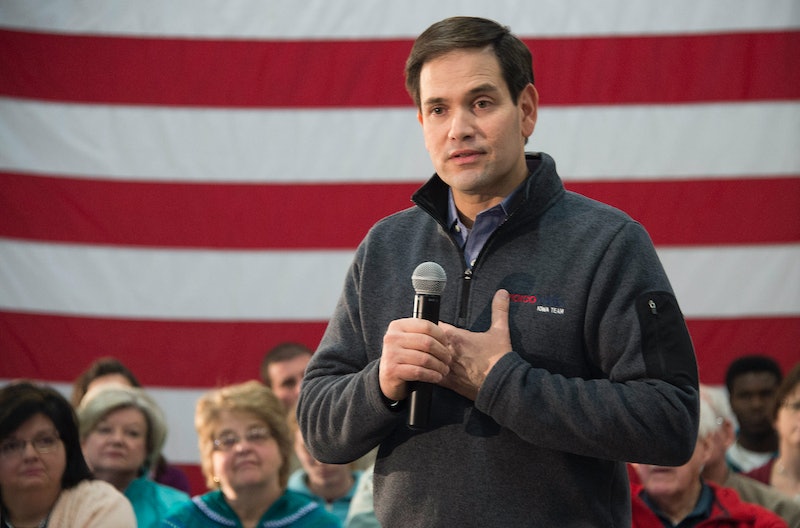 During the GOP presidential debate on Thursday night, there was an awful lot of arguing about what's been one of the most simmering, conflict-inducing issues within the Republican primaries ― that's right, I'm talking about immigration. The run-up to the Iowa caucuses has been little more than a rhetorical throw-down to decide who's the most strident, muscular, and conservative candidate on border and immigration enforcement. And in the course of those arguments, a certain piece of legislation kept coming up: So, what is the Gang of Eight immigration bill and why was it brought up at Thursday's debate?

First things first, that's not the bill's actual name. While you'll hear plenty of talk on the subject throughout the debates using the nickname "Gang of Eight immigration bill," its actual name is the Border Security, Economic Opportunity, and Immigration Modernization Act of 2013. The phrase "gang of eight" refers to the eight senators who worked together to craft a bipartisan, comprehensive immigration reform bill back in 2013. There were four Democrats and four Republicans who comprised the gang: Sens. Michael Bennet, Dick Durbin, Bob Menendez, and Chuck Schumer on the Democratic side, and Sens. Jeff Flake, Lindsay Graham, John McCain, and Marco Rubio for the Republicans.

The bill that the group put together never actually made it through Congress, however ― it passed the Senate by a decisive 68-32 vote, but it's languished in the Republican-controlled House of Representatives ever since. Nowadays, its main legacy is the raucous disagreement that it still causes within the GOP primaries. Both the proposals the bill contained ― specifically, a slow-moving "pathway to citizenship" provision for undocumented immigrants ― and a subsequent amendment have been a weight hanging around the necks of a certain major contender for the Republican nomination: Marco Rubio.

As one of the bill's co-sponsors, the political peril for Rubio is clear ― he's now politically tethered to the citizenship program, despite the fact that he's tried to distance himself from it. Ted Cruz has been trying to carve out a position to the right of Rubio on immigration, and the latter's Gang of Eight bill has become a big, blinking target. Rubio had responded by arguing (correctly, as it happens) that Cruz has also supported proposals that include legalization of undocumented immigrants (Republicans, more or less, exclusively call them "illegal immigrants"), and as such, their positions aren't all that different.

That tension was on full display during Thursday night's debate, as the two contending Latino Republicans went toe-to-toe on the issue. It'd be fascinating to see whether the issue plays big in the upcoming Iowa caucuses ― the first votes of the 2016 presidential campaign season will be placed on Feb. 1, finally kicking off a campaign season that's sure to be exciting as all hell.