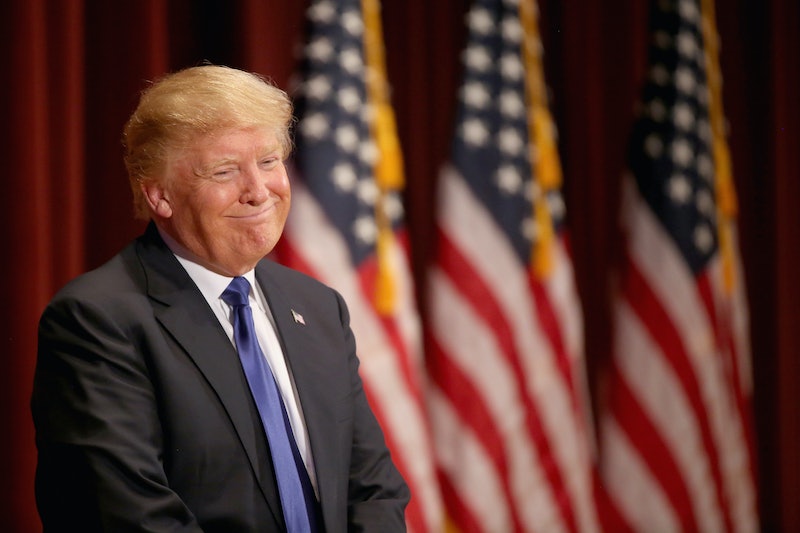 While the other Republican presidential hopefuls battled on stage in the seventh GOP debate Thursday night, Donald Trump held an event to raise money for veterans. As part of his ongoing feud with Fox News anchor Megyn Kelly, Trump decided to sit out the forum and host his own rally instead. Since the GOP front-runner talked up the event so much, many people wanted to know how much money Trump's veterans' fundraiser actually raised.

The website created for the cause, DonaldTrumpForVets.com, explained that "100% of your donations will go directly to Veterans needs"; however, the proceeds went directly to the Donald J. Trump Foundation, and the website didn't specify what veterans' charities the foundation would distribute the money to.

Even after the event, neither Trump nor his foundation announced which organizations would be gifted with the donations. "The money that's going to be raised will be in bulk and the disbursements will be spread all across the country to veterans organizations. And those who don't want to receive the money, we'll make sure not to send them a check," Trump campaign spokeswoman Katrina Pierson told CNN's Jim Sciutto Thursday. CNN could only find one veterans group that claimed it was contacted by Trump representatives about possibly receiving donations.

Although it's unclear how or by whom the money will be spent, Trump said at the beginning of the rally that his campaign raised $6 million "while the politicians talked." While listing some of the major donors, he revealed that $1 million of the total was money he donated to his own foundation. The website brought in $500,000, according to Trump, with the rest of the money coming from wealthy donors, including investor Carl Icahn, real estate developer Phil Ruffin, and Marvel Comics CEO Ike Perlmutter.

It's not too surprising that Trump's event raised millions of dollars (or that he donated to it himself), but hopefully the money makes it to real veterans organizations.