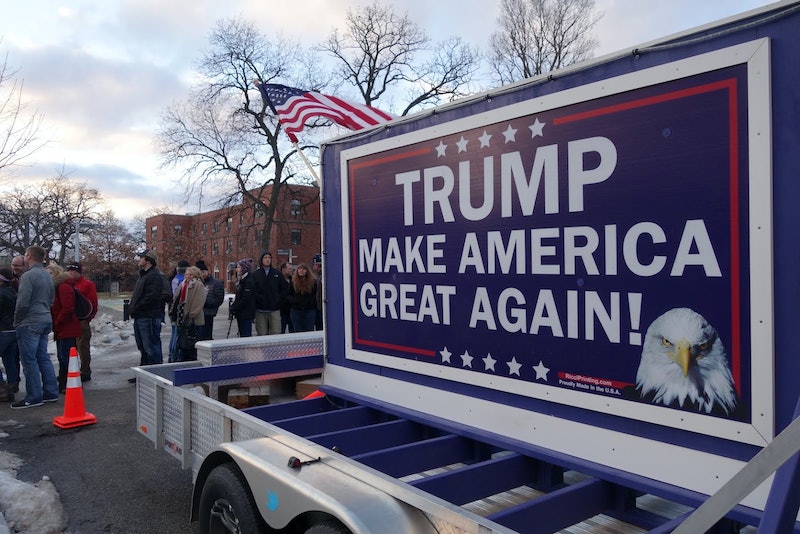 In the latest installment of Donald Trump's feud with Fox News and Megyn Kelly, the leading Republican candidate for president boycotted Thursday's primetime debate, hosting an event of his own instead. Trump made it clear throughout the week that he would rather raise money for veterans than make Fox News any money by appearing on stage in front of his least favorite moderator. Following through on that plan, he hosted a fundraising event for veterans' groups at Drake University in Iowa... but the Trump didn't say which veterans' groups he is supporting.

Leading up to the event, Trump collected donations via a website called DonaldTrumpForVets.com. The website revealed that donations would go to veterans via Trump's own foundation, the Donald J. Trump Foundation. The Trump Foundation was criticized before Thursday's event for a lack of transparency, but it was expected that Trump would announce which groups he would distribute donations to while on stage. The event came and went, but no announcement arrived.

Even before the event began, the online donation site boasted that it had collected more than $300,000 on Thursday alone. According to the site, 100 percent of those donations will go directly to the unidentified veterans' organizations. Trump had been promoting the site and his non-debate event on Twitter:

At the start of the rally, Trump announced that his campaign had raised roughly $6 million. He also identified several of the major donors — including himself. Jokingly, he spoke about himself in the third person, saying that he had donated about $1 million to his foundation.

It's easy to think that Trump will live up to his promise and donate all the money to reputable groups. After all, he certainly doesn't need the money. Not to mention, he's been publicly touting his commitment to vets all over the place and he probably doesn't want to dig himself into a huge PR crisis just days before the Iowa caucus.

The thing is, Trump's foundation hasn't had the best track record for donating to veterans in the past. Since 2010, he has given just $35,000 to veterans' groups. Granted, maybe that's because he hadn't made such a public commitment to the vets until this election cycle.

Even still, the Trump organization doesn't seem to be living up to one member's pledge that the list of beneficiaries would be announced during Trump's event. On Thursday, Trump's son tweeted that the list would be made public during the fundraiser. At the time of this writing, the fundraiser had passed, but the list had not been announced.

Although the donation may still be pending, Trump's event certainly focused on veterans, as promised. Trump introduced several veterans, who addressed the large crowd. Additionally, Trump invited two of his opponents, Mike Huckabee and Rick Santorum, up onto the stage to demonstrate the need for unity in tackling veterans' issues. Assuming the multi-million-dollar donation will be distributed as promised, it's nice to see that something positive — a win for veterans' groups — came out of the dramatic feud that led to Thursday's event.