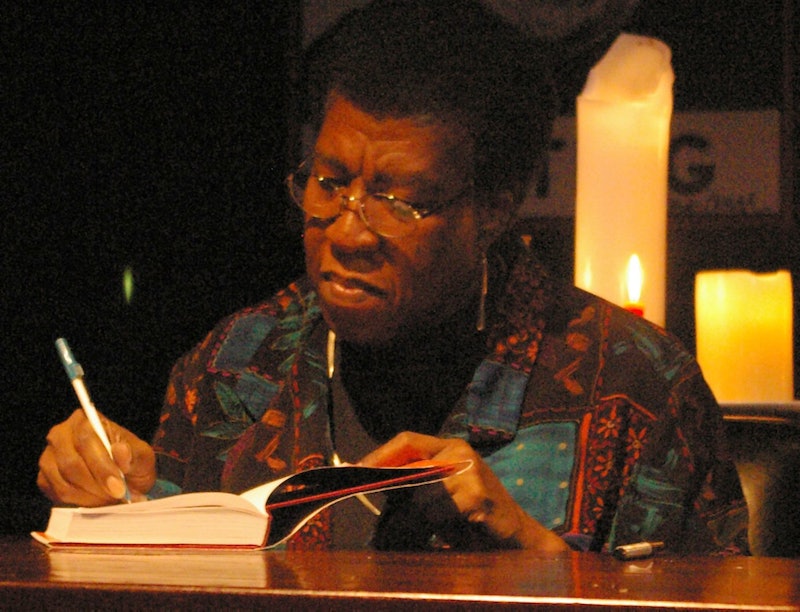 February 24, 2016 will mark the 10th anniversary of Octavia E. Butler's death. In 2008, her papers passed to the Huntington Library of San Marino, California, per her wishes. Now, to celebrate her life and her body of work, The Huntington and other organizations have taken on a new project, Radio Imagination, whose "artists and writers will conduct first-hand research in Butler’s archive at the Huntington Library and create new work based on their research."

Butler died in 2006 after she suffered a stroke outside her home; she was 58 years old. She left behind a legacy that includes the science fiction masterpieces Kindred, Dawn, and The Parable of the Sower. In October 2005, she published her final novel, Fledgling, and was inducted into the International Black Writers Hall of Fame at Chicago State University's Gwendolyn Brooks Center.

The Huntington says that Butler's papers are " one of the most actively used archives at the Library." You can view photos and excerpts from her hand-edited manuscripts at the library's website. The selection available for online viewing is limited, to say the least, but it does contain one intriguing and inspiring article: Butler's letter to herself, a personal mantra for success.

You can view Butler's note in full on the The Huntington's blog. It reads:

I shall be a bestselling writer. After Imago, each of my books will be on the bestseller lists of LAT, NYT, PW, WP, etc. My novels will go onto the above lists whether publishers push them hard or not, whether I'm paid a high advance or not, whether I ever win another award or not.

My books will be read by millions of people!

I will buy a beautiful home in an excellent neighborhood

I will help poor black youngsters broaden their horizons

I will help poor black youngsters go to college

I will hire a car whenever I want or need to.

My books will be read by millions of people!

The Huntington dates Butler's letter to 1988, the year before Imago — the final book in her Xenogenesis trilogy — was published. At this point, Butler was already well-known in science fiction circles. Her short story, "Speech Sounds," won the Hugo Award for Best Short Story in 1984, and her novelette, "Bloodchild," won the Hugo, Locus, and Science Fiction Chronicle Reader Awards the following year.

Although Butler wrote her letter after achieving a certain degree of fame, that she managed to achieve much of what she set out to do remains impressive. In the summer of 2007, the Octavia E. Butler Memorial Scholarships were awarded to their first recipients. The scholarships help writers of color attend the Clarion writing workshops, in which Butler honed her craft and later taught. And although Butler may not have made the bestseller lists, her novels created a legacy for women and writers of color in the sci-fi and fantasy genres.

Even if you aren't a writer, the determination in Butler's letter to herself will inspire and empower you to follow your dreams. Chart your own course, and stay on it. So be it! See to it!