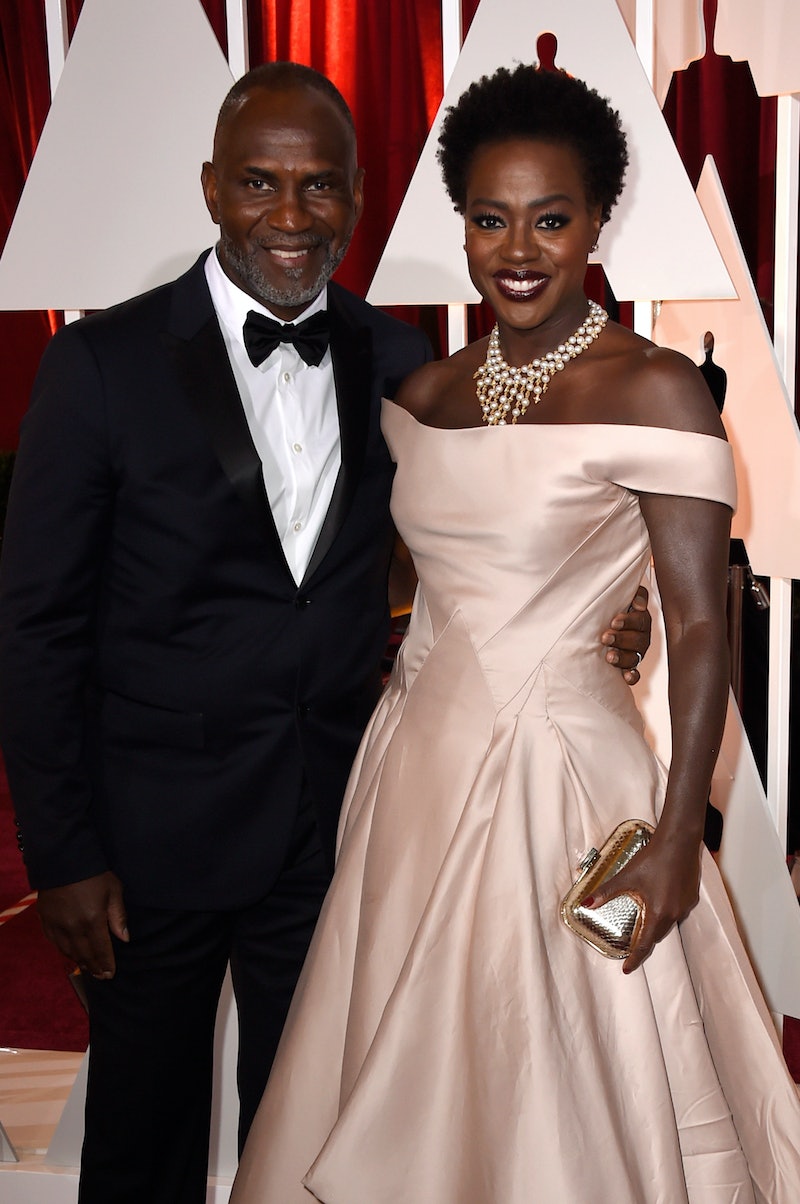 Behind every great woman in Hollywood is a man who holds her purse while she accepts her awards and is her arm candy on the red carpet. And in the case of the inimitable Viola Davis, that great man is Julius Tennon. The 50-year-old Emmy award winner is nominated for a Screen Actors Guild award for Outstanding Performance by a Female Actor in a Drama Series for her starring role on How To Get Away With Murder, and her longtime husband Tennon will likely be there by her side at the ceremony on Saturday, Jan. 30. After all, they've walked many red carpets together in the past.

Tennon is an actor himself, and he and Davis actually work hand-in-hand in film. Davis and Tennon have been married for 12 years, and have a daughter together. Tennon is more than 30-years a theater veteran, and recently, has been on many television shows. He and Davis spend lots of time together not only as a family, but as creative and business partners; they have a production company together called JuVee Productions. Tennon is a lucky man being married to the amazing Davis, but he's got a lot going on himself.

He's Made Acting History, Too

Tennon, a fellow actor and former football player, made history in theater much like Davis did in television. The 62-year-old Austin, Texas native was offered a full football scholarship to the University of Tulsa, where he became the first African-American student to graduate from the school's theater program.

He Was A Nervous About His Wife's Emmy Speech

Davis' acceptance speech for her Emmy was one of the most powerful and inspiring award show speeches ever, setting off a wave of inspiration for black women in Hollywood and receiving an incredibly powerful response.

Davis sat down with Ellen DeGeneres for an interview the week following her historic win, bringing, of course, her statue along with her, and she admitted that Tennon was anxious about her speech:

My husband said afterwards, "V, I didn't know where you were going with that. I really didn't. When you were saying 'those white women with their arms stretched out over the line,' I was like, What is she doing?"

Of course, ultimately, he was proud of her — and so was everyone else!

He Works With Davis To Give Voices To People Of Color

Davis has been outspoken about the problems with Hollywood's inclusion problem for a long time. Though she is everywhere right now, before she had such exposure, Davis and Tennon started JuVee Productions (an adorable name) in 2012. The company, according to its website, has a mission to create a space for unheard voices:

With an emphasis on producing narratives from a diverse range of emerging and established voices alike, JuVee Productions aims to become the go-to creative hub where the next generation of filmmakers and artists have the space to craft dynamic stories spanning the broad spectrum of humanity.

Some of the great projects from JuVee include the recent short film The Brink, which premiered digitally in October 2015. The company also has several films and productions in the works, and luckily, many of them star Davis herself!

You've Probably Seen Him On TV

Even if you didn't recognize him, there's a likelihood that you've seen Tennon in a role. Especially if you're a fan of Criminal Minds. Tennon played villainous criminal Carl Buford on the show, appearing first in 2006 and reprising his role in 2013.

Tennon was also in the 2014 James Brown biopic Get On Up, and he's had roles of a number of great shows including The Practice and Friday Night Lights.

They Met In The Most Serendipitous Way

As if they couldn't seem more supportive and made for each other, Davis and Tennon met in the sweetest meet-cute ever. Talking to Us Weekly in 2013, Davis said she met her husband after she literally prayed for one:

I was the loneliest woman in the world, and someone said, "You should just pray for a husband." I said I wanted a big black man from the South who looked like a football player, who already had children, who maybe had been married before. Three and a half weeks later, I met my husband.

He met all the criteria. And the two met on the CBS show City Of Angels, no less.

They Have A Big Family

Tennon had two sons from a previous marriage when he and Davis married in 2003. And in 2011, they added to their family, when they adopted daughter Genesis.

Hopefully, Tennon will be watching Davis take home another award and give another great speech at the SAG Awards on Saturday if she wins. And after the triumphant and supportive response to his wife's Emmy speech, Tennon shouldn't be nervous at all.

More like this
Amanda Gorman Shared A Powerful Message On Meghan Markle’s Penultimate Podcast
By Darshita Goyal
Kim Cattrall Had A 'Sex And The City' Reunion With Creator Darren Star
By Grace Wehniainen
Mindy Kaling Explains Why 'The Office' Would Be "Inappropriate" Today
By Jake Viswanath
Is Blake Lively Or Penn Badgley The Richest 'Gossip Girl' Star From The OG Series?
By Hugh McIntyre
Get Even More From Bustle — Sign Up For The Newsletter