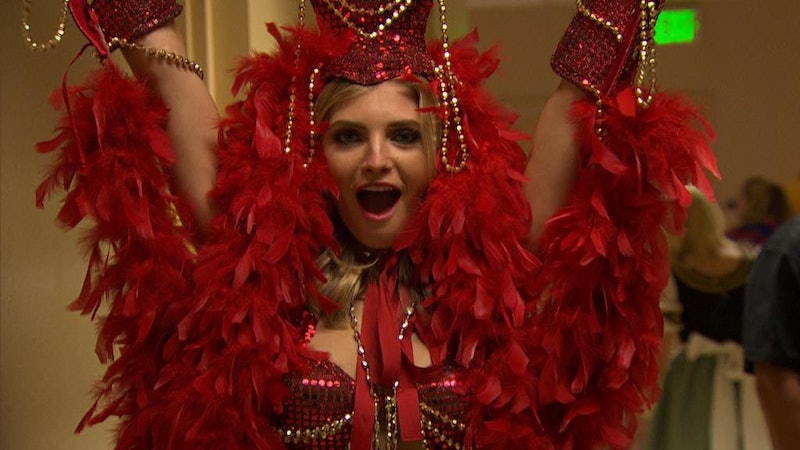 After 20 seasons of The Bachelor, you’d think it would start getting easier to predict who will get a rose and who is going home, but it hasn’t. For example, Bachelor contestant Olivia Caridi started the show off strong, getting not only the first impression rose from the opening night, but also the group date rose from Ben after a chemistry test at The Love Lab. It truly seemed like Olivia might win Ben’s heart. But, then things took a turn for the tragic. Olivia’s overly-confident behavior seemed to rub the other women the wrong way, and even Ben seemed annoyed that Olivia wouldn't stop stealing him away to apologize for her cake dance in Las Vegas. So, some fans think Olivia will be heading home soon because of that behavior.

Fortunately for Olivia, Ben hasn’t caught wind of too many of her freak outs thus far, and most of the times she’s stuck her foot in her mouth have been in her confessional interviews. She almost escaped last week’s episode unscathed too, until the Vegas meltdown pretty much changed everything. Has Olivia gone from the front of the pack to the bottom of the totem pole over the course of a few episodes?

Here are a few reasons she might be going home on Monday.

We can’t forget that this is TV, and the people doing the editing are trying to make a compelling story. And, in every good horse race, the contender who starts out in the lead at the beginning of the day doesn’t necessarily stay there. Olivia came out of the gate too strong, winning two date roses in a row. It makes sense that as an early favorite of the season, Olivia is now falling behind some of the other women who were "dark horses" so to speak.

From one interview to the next — and sometimes in the same interview — Olivia will gush about how wonderful and strong her relationship with Ben is, and how she’s not worried at all about her chances… and then she’ll totally flip sides. She’s happy and excited one minute and insecure and freaked the next. That back and forth may grow to wear on Ben.

If I hear that sound bite of “Ben is my man at this point,” one more time, I might go crazy. It’s probably just some creative editing behind the scenes, but Olivia’s confessional videos sometimes make it seem like she thinks she’s already won this thing. She does know Ben’s dating like 20 other women at the same time, right?

Speaking of dating other women, Olivia’s jealousy came out to play during last Monday's episode, when Ben and JoJo got physical in plain view. All of the women had to watch Ben and JoJo exchange some cute kisses, and none of them took it very well. But, Olivia, in particular, seemed the most crushed by the kiss. Let’s just be thankful she doesn’t know he’s locked lips with just about every girl in the house at this point. (As he is totally allowed to do considering he's searching for his wife.)

5. She Doesn’t Get Along With The Other Contestants

You’d be hard pressed to find an episode of The Bachelor this season where at least half a dozen women don’t comment on Olivia’s cutthroat nature and how much they don’t like her. The whole point of this kind of reality show is to cause drama between the contestants, but for one person to be so universally disliked by the rest of the group? Could be a sign of her impending doom. The least-liked contestant doesn't usually end up the winner.

In a group of 28 women, it’s hard to get solo time, even when a few ladies are leaving each week. That being said, we’ve seen a handful of incredibly romantic one-on-one dates so far, and none of them have been with Olivia. She might have good reason to be a little paranoid, since those date cards are usually an insurance policy to get you through the rose ceremony.

After an embarrassing day on stage in front of 1200 people, anyone would have had a minor panic attack. Unfortunately, Olivia just couldn’t put it out of her mind on the group date, and the meltdown continued to wreck the evening.

But, even if she goes home, Olivia’s got more than enough personality to potentially be next season’s Bachelorette — so her elimination wouldn't be a total loss.