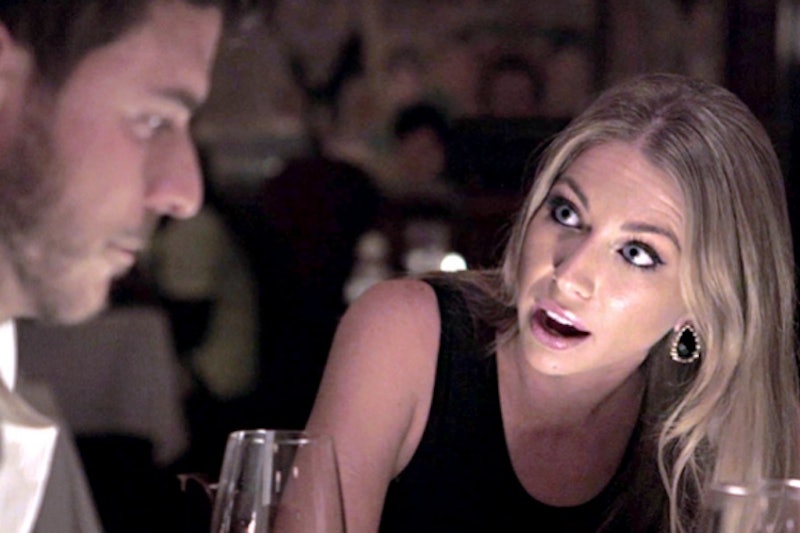 I do my best to avoid Vanderpump Rules spoilers and I hate reading current gossip about the cast BECAUSE IT SPOILS THE SERIES, DUH. Okay, I’m lying. You caught me. I’m never not inhaling gossip about the cast. Can’t stop, won’t stop. I know that Tom Sandoval and Kristen might’ve ended things recently, I can’t get enough of the Jax/GG from Shahs of Sunset crossover, and my jaw dropped to the floor when I saw Stassi’s picture of a moving truck.

Yes, I spend an embarrassingly sizable chunk of each day reading “present day spoilers” about the cast (thanks, social media!). But what about the actual show? Do I seek out details regarding upcoming episodes? You bet. I'm obsessed with the snippets from Monday night’s new ep. The clips of Stassi confronting Jax and SLAPPING KRISTEN (HOLY SHIT. SHE DID NOT) about the Kristen/Jax hookup rumors have me on the edge of my seat. This little rumor sprung up earlier this season, but Kristen and Jax snuffed it out before it could become an Ariana/Tom Sandoval/Kristen brush fire. Well, the rumor is BACK, and this week? Stassi is getting answers. And slapping people. Oh, Stassi. Your violent metaphors? Amusing. You actually taking things to a violent place? TOO FAR.

So it looks like Kristen and Jax lied to everyone after all. Gosh, Kristen has had a rough season. And Jax? Meh. This is the 93rd time Jax has deceived Stassi/the SUR staff/Lisa Vanderpump/the viewers/me. Old hat for ol’ Jax. There was the Las Vegas cheating/pregnancy scandal, the work bathroom sexcapades with Laura-Leigh, the Tom Sandoval/Ariana drama, and now the Kristen thing.

What if Jax admitting to hooking up with Kristen is ANOTHER LIE? WHAT IF THEY NEVER HOOKED UP AND HE'S LYING TO STASSI?

I have a theory. Bear with me.

Perhaps, Jax realizes telling Stassi that he slept with one of her close friends will anger her, but it’s a risk he’s willing to take. Why? Because it could be an opportunity to get in good with Stassi. He’s always trying to get in good with Stassi. Those Zara shorts almost did the trick, but Jax knows as well as we do that the fastest way to Stassi’s heart is to take her side in battle. So maybe, he’s creating a battle so that he can take her side. Ah, a ploy! "Admit" you slept with Kristen, I imagine Jax thought to himself. And then agree to confront Kristen with Stassi. Stassi will be so angry with Kristen that she’ll forget that she’s mad at you! She’ll turn to you for revenge help! You will be on the same team! IT’S FOOLPROOF.

Perhaps, he figures that while she will be furious with him, her fury will be eclipsed by the rage she feels toward Kristen. Kristen is her pal (well, after all of the crap that went down the past few eps, “was her pal” might be more accurate). Kristen is not Jax. Kristen is not a known liar like Jax. Kristen, as far as I'm concerned, has never done something like this to Stassi. Jax is always doing stuff like this to Stassi. Therefore, Jax might be banking on Kristen’s lie/“lie” blindsiding (and hurting) Stassi more than Jax’s lie/“lie” because Stassi expects less from Jax.

Say you have a friend who always shows up to your dinner plans 50 minutes late. At first, this annoys you, but then you get used to it. You realize that “being late to dinner” is just a part of who they are. You aren’t going to stress out over it anymore. You factor the “always 50 minutes late” into your future plans. But say you meet up with another friend. A friend who is always on time. A friend who’d go off on you if you were five minutes late to the restaurant. Say that friend shows up 50 minutes late without warning or an excuse. You’d be frustrated and offended. You counted on that friend to be on time. You expect punctuality from that friend. Yes, it’s a double standard, but it is what it is.

It’s not a perfect analogy, but I’m keeping it.

Or maybe, he’s lying because he wants to stir up trouble/wants camera time. It could be as simple as that.

OR! HE COULD BE TELLING THE TRUTH. IDK.

Jax tells so many not-truths that it’s impossible for me to not be skeptical about everything that comes out of his mouth. He could say “The sky is blue today,” and I’d be like, “A likely story, JAX.”