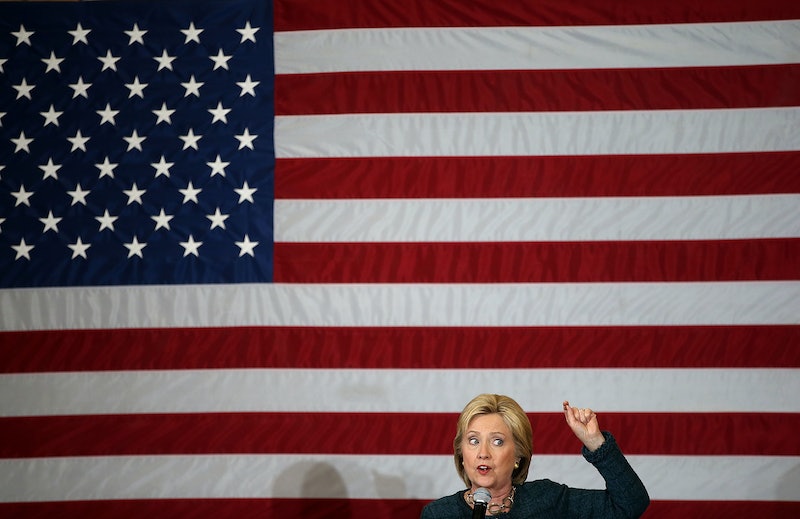 After three endorsements for federal office and two for the Senate from the paper, The New York Times has endorsed Hillary Clinton for the Democratic primary ahead of the all-important Iowa Caucus. Not only did the key endorsement lay out glowing praise for the former secretary of state, but it also dished out some major shade for the Republican 2016 circus. The editorial board writes that by voting for Clinton, people have the chance to nominate one of the most "broadly and deeply qualified presidential candidates in modern history."

This key endorsement comes during a surge of support for Bernie Sanders, and Clinton has faced a potential backlash in being the inevitable Democratic pick. The endorsement, though critical heading into the primaries, isn't necessarily prescient. The Grey Lady also endorsed Clinton for the 2008 primary over Barack Obama and John Edwards.

The Times' rationale states the fairly obvious: that Clinton would be the first woman nominated by a major party. But it also lays out her qualifications that, according to the editorial board, she has demonstrated through her political career and as first lady with the "brilliant and flawed" Bill. More specifically, the board praises her "sensible and effective" stance on firearms, her plan for economic reform, and her "lifelong fight for women":

Mrs. Clinton is keenly aware of the wage gap for women, especially for women of color. It’s not just that she’s done her homework — Mrs. Clinton has done her homework on pretty much any subject you’d care to name. Her knowledge comes from a commitment to issues like reproductive rights that is decades old. She was well ahead of Mr. Sanders in calling for repeal of the Hyde Amendment, which severely limits federal money to pay for abortions for poor women.

In the endorsement, the Times laid out not only why Clinton is the right fit for the job, but underscored some of the lingering doubts about her opponents Sanders and Martin O'Malley (though the argument against endorsing the latter was, uh, not as impassioned. Sorry, Marty). As the editorial board writes:

Mrs. Clinton’s main opponent, Senator Bernie Sanders, a self-described Democratic Socialist, has proved to be more formidable than most people, including Mrs. Clinton, anticipated. He has brought income inequality and the lingering pain of the middle class to center stage and pushed Mrs. Clinton a bit more to the left than she might have gone on economic issues. Mr. Sanders has also surfaced important foreign policy questions, including the need for greater restraint in the use of military force.

In the end, though, Mr. Sanders does not have the breadth of experience or policy ideas that Mrs. Clinton offers. His boldest proposals — to break up the banks and to start all over on health care reform with a Medicare-for-all system — have earned him support among alienated middle-class voters and young people. But his plans for achieving them aren’t realistic, while Mrs. Clinton has very good, and achievable, proposals in both areas.

The third Democratic contender, Martin O’Malley, is a personable and reasonable liberal who seems more suited for the jobs he has already had — governor of Maryland and mayor of Baltimore — than for president.

Ultimately, the editorial board's endorsement of Clinton underscores a major factor in the election that seems to be lost on many people: We need a Democratic nominee for president who has a proven record in affecting change. Yes, Sanders represents hope for a a deeply needed change in the United States, but Clinton actually has the record to get us there.