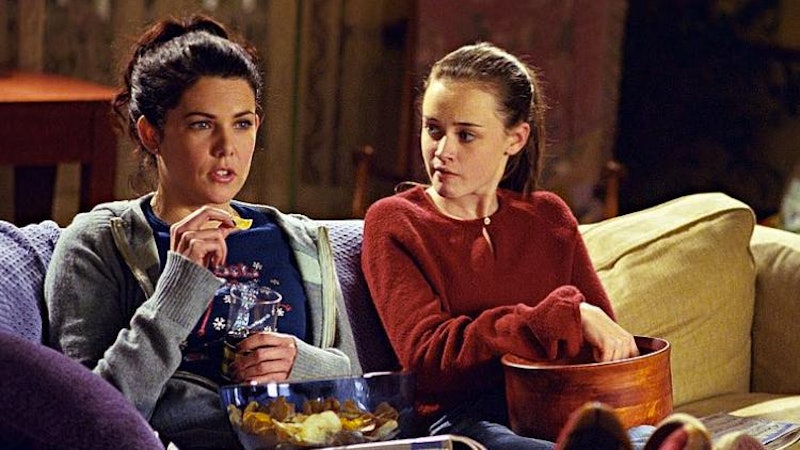 Grab your piping hot coffee and brush up on your obscure pop-culture references, the Gilmore Girls Netflix revival is a-go. The cast has been locked down, production on the first installment is progressing, and Ms. Lorelai Gilmore-herself, Lauren Graham has just clued the world in on what to expect from the Gilmore Girls mini-series finale. While it may seem a bit like putting the horse before the cart since the show's premiere date has yet to even be announced — like a true Gilmore fan, I never take things slow.

Lauren Graham spoke about the new series with TVLine and man, like her character Lorelai Gilmore, Graham was spitting out gems in record time. Graham explained that she had just participated in a table read for the mini-series' first installment which is titled, "Winter" and that things are going spectacularly. She even said a table read of a scene between herself and Kelly Bishop's Emily Gilmore was "alive." Which I am taking as code for it is amazingly awesome and possibly the greatest conversation ever had, something that is totally possible since creator Amy Sherman-Palladino wrote it. Sherman-Palladino is queen.

Lauren Graham then shared some other secrets from the Gilmore Girls land. While Lorelai and Rory's home set has been rebuilt and moved to a new sound stage, according to Graham, the magic and memories can still be felt. She even says she nearly cried when she returned to the house. She said:

Alexis [Bledel] and I walked onto the set together and — I feel super emotional about a lot of it and I’m afraid I’m going to start crying at every turn — but walking onto that set really felt like something. It felt like a lot of time had passed and it felt like we were just there. It felt amazing.

It is good to know that the fans are not the only ones getting emotional over the Gilmore Girls revival.

Possibly more importantly, while Graham has yet to read the script for "Fall," she is already in possession of the much-anticipated finale. And Graham must have some iron-clad self-control, because she has resisted the urge to skip reading the entire script and just flip to the end. Instead, creator, writer, producer, director and overall Wonder Woman, Sherman-Palladino filled her in on the final four words of the series — that's right, the long mythicized final four words of the series, the existence of which have plagued Gilmore Girls fans for years. The legend goes, Sherman-Palladino had the final four words of the series in mind for a long while before the series ended — but, considering she exited the show before Season 7, they never made it to screen. Now, they will.

"She didn’t realize that I didn’t know them," Graham says. "So I asked her, 'Who says them?' And she says, 'Both of you.' That’s all I can say. It’s not, you know, in unison." And while Graham doesn't clarify, it would make sense that the two characters not speaking in unison — aka having a conversation— would be Rory and Lorelai. Ah, the ultimate mother-daughter duo, together forever.

So, there you have it. We don't know what lies ahead storyline wise for the miniseries but we do know that it ends with two character having a conversation (in Luke's diner, perhaps?) — just the way the pilot and the series finale ended. This news deserves a happy dance.

I am so happy you are back, Lorelai, and that you've brought the rest of Stars Hollow with you!