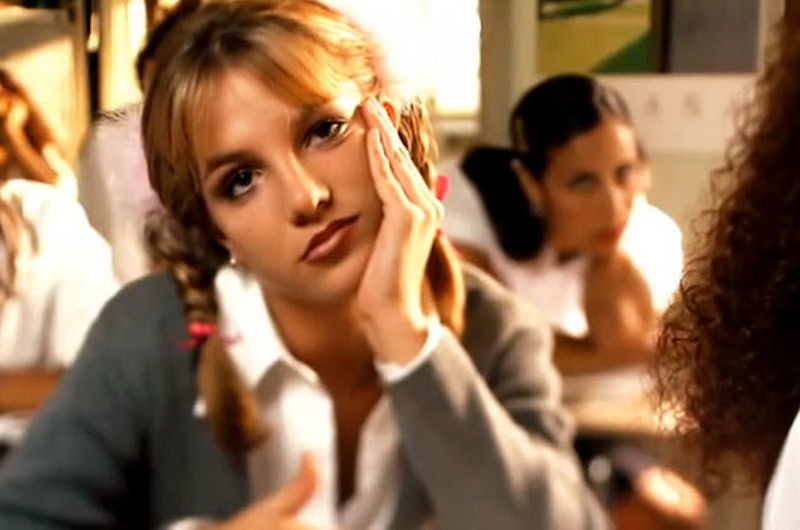 Let's just all be real with each other for a hot second: the '90s was the best decade. Sure, I'm partial because it's the decade in which much of my youth passed, but it was also awesome. It was a simpler time, a more innocent one, and featured some of the most hilariously bad and amazingly good fashion, cultural, and entertainment trends in history. In particular, '90s music had a special shine to it that hasn't yet been imitated, for better or worse, and which was very much "of its time." While some releases that came out during that ten year period were downright terrible, pop music was on an upswing during the '90s and some songs have really stood the test of time.

Whether or not you were a fan of '90s pop music — and I should mention for the sake of full disclosure that I spent the later years of the '90s in an alt phase in which I only listened to the likes of Ani Difranco and swore I was too good for anything on the radio like a dummy — you have to admit that some of the tracks that came out then were not only catchy, but are just as good today as they were back then. Here are just a few of them:

I don't really have words for how much I loved The Miseducation of Lauryn Hill and how often I listened to it. I got it from Columbia House when the idea of getting 15 CDs for $.01 still seemed totally legit and not at all like a trap that would cost your parents tons of money. "Doo Wop (That Thing)" combined an important political message with incredible melody and is still just as amazing today.

While you might think that the years would have faded the importance of "Waterfells", which dealt with the AIDS epidemic in a really sobering yet accessible way, then you'd be wrong. TLC was one of the best and most popular girl groups of the '90s, and the fact that they used their position to be so outspoken about important issues of the time made this even better.

Will Smith may have moved on to a big Hollywood career, but to me, he reached his height with the release of "Summertime", the ultimate warm weather jam that can still be heard blasting in my Brooklyn neighborhood literally every summer. It's timeless, it's groovy, and it's way too good. I think we'll be listening to this for decades to come.

"Vogue" needs little explanation on this list, considering Madonna herself is a timeless legend whose music will live on as some of the greatest pop music ever to be released. With "Vogue", however, she truly achieved something special, launching a new dance style, a few fashion trend, and an absolutely brilliant song.

Turn on the TV to any reality singing competition and you'll find a hopeful belting out "I Will Always Love You", albeit with far less class and sub-par vocal chords compared to Whitney Houston. This track, which featured in The Bodyguard and on basically every radio station ever, was a masterclass and will never be matched again. Dolly Parton may have sang the original, but Houston made it her own.

Has there ever been a more scathingly angry (and accurate) breakup song than "You Oughta Know"? I think not. She expresses the anger, the confusion, and the heartbreak of losing a relationship with all the angst we needed in the '90s and there's never been another track that's come close.

Whenever anyone talks about '90s pop music, without a doubt, "... Baby One More Time" is probably the first song to come to mind. Britney Spears' debut single hit the top of the charts and kicked off a period of bubblegum pop that basically made the decade what it was. It's the track that started it all, and it's amazing.

There was something special about rap and hip hop in the '90s. I grew up on it, and it gave me a deep-rooted love of the genre which I still have today. Biggie was one of the best rappers of his time, and had such a distinctive sound that you automatically recognized his voice as soon as he started rapping. "Juicy" was a real highlight and still one of my favorites to this day.

Sure, Oasis may have gotten all the credit, but The Verve was killing the Brit-Pop game in the '90s, too. "Bittersweet Symphony" was perfect in every way, combining that alt-emo vibe along with beautiful instrumentation and while it's a totally nostalgic listen, it's still a great one.

Sure, trip hop may not be such an unknown musical genre these days, but back in the '90s, is was pretty much completely underground, and Portishead is one of the bands that originated the sound. "Glory Box" remains one of the best, most influential tracks of the genre and for good reason — it's really, really good.

That's right — two TLC songs on one list. They were just that good. "No Scrubs" is the ultimate ladies anthem, eschewing no good guys who want to mooch off us instead of getting out there and really achieving things. The references to this song in pop culture are still rife to this day, and it's easy to see why.

More like this
Britney Has Been Granted A Restraining Order Against Her Ex-Husband
By Bustle Staff
Every Song In The Umbrella Academy Season 3
By Kadin Burnett
The 'Hocus Pocus' Sequel Finally Has A Release Date & It Makes Total Sense
By Shannon Barbour and Radhika Menon
“The Door Is Always Open” For Another 'Breaking Bad' Spin-Off, Says AMC Boss
By El Hunt
Get Even More From Bustle — Sign Up For The Newsletter