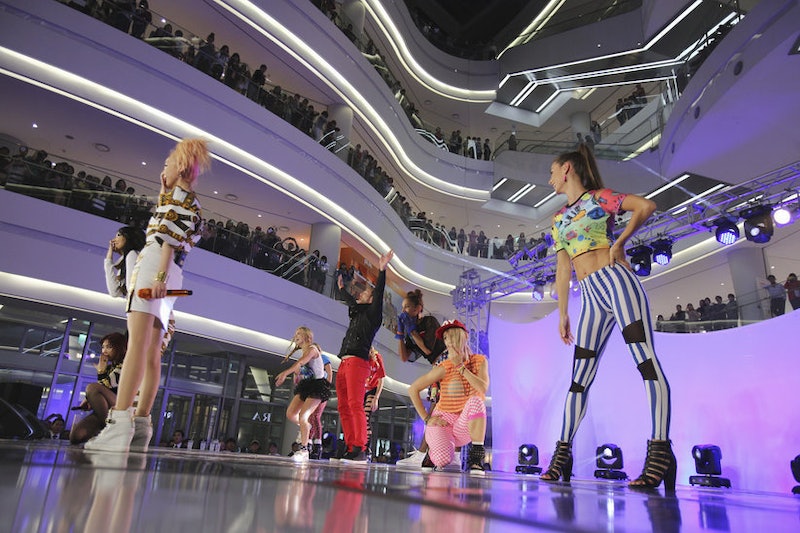 The Bachelor jet-setting has begun! This week: Bachelor Juan Pablo Galavis and the ladies went to Seoul. What a cool trip. It looked really, really incredible. Hanging out with 2NE1!!! Are you kidding me?!? That'd be the neatest. I caught myself feeling envious multiple times throughout the episode, and then I remembered that I’d probably hate being on The Bachelor more than anything, and the jealousy went away. Sure, the traveling would be tops, but being on the show just seems like so much work.

Before Juan Pablo left for Seoul, he said goodbye to Camila. Camila was as cute as ever. She said “I have a wedgie” in Spanish, and it nearly killed me. CAMILA IS SO ADORABLE.

Nikki was pissed off about the group date sitch because she wanted a one-on-one/was annoyed with the other girls. They went to YG Entertainment and met 2NE1. AUGH! So amazing. 2NE1 taught them some choreo. Five of the girls were like, “Yeah! Dance is fun!” Nikki? Nikki hated life. She did some intentionally crappy dance moves across the floor of the rehearsal space, and I was like, “Nikki. I like your grumpy style. You do you.”

After they danced around for a while, 2NE1 was like, “SURPRISE! You’re going to wear awesome costumes and perform with us in front of a bunch of screaming fans.”

Nikki’s response: “I kind of hope we’re performing for the South Korean School for the Blind.” Crimeny, Nikki.

The concert was at a mall. There was a huge crowd. Nikki was terrified. When the performance started, Nikki tried to smile, but you could see the pout underneath. It was hilarious. And so honest.

By the end of the routine, Nikki seemed to be having fun. Reluctant fun, but I'll take it!

Chelsie said Kat was showing off, which, meh. She seemed fine? I don’t know. If I was a good dancer, I’d probably ham it up, too. In a confessional, Nikki imitated Kat. Her impression involved this full-body thrash move.

After the performance, the group hung out in the garden. While Kat one-on-one’d, Nikki talked mad trash about her. Cassandra, Elise, Chelsie, and Danielle were not into Nikki’s shit-talking.

Each lady did the one-on-one thing with Juan Pablo. Nikki won the rose.

Juan Pablo and Sharleen walked through a market and tried a bunch of delicious-looking food. I WANT TO GO. Juan Pablo took her to a beautiful teahouse. I WANT TO GO. They talked. She called him a smartass, and that that makes him interesting and not bland. In a confessional, she said, “He’s more fun than I expected.” Someone give Sharleen all of the roses.

After the teahouse visit, he asked her to show off her opera skills. She didn't feel comfortable singing for him, but she did a quick vocal warm up and hit a few notes anyway. Her voice sounded very pretty. Afterward, they kissed HARD.

After the singing and kissing, Juan Pablo asked Sharleen how many kids she wants to have. She said she’s never really thought about it. She also admitted that she once dated a guy with a kid, but she wasn’t ready for it then. Ugh, I loved that real talk.

Juan Pablo also loved the real talk because he gave her a rose for her being different, classy, and honest. He called her bella. They kissed again.

This group did SO MANY THINGS. They went to karaoke in a giant dollhouse. They took a group pic in a photo booth. They paddleboated around (much better than Jeepboating). They went to Dr. Fish Zone. Dr. Fish Zone is fish pedicure place. Fishicure? Pedifish? Anyway, I don’t really like feet, so this scene was not my favorite.

Throughout the date, Andi addressed Clare’s aggressive approach to getting Juan Pablo time. Andi doesn’t seem to be a big Clare fan.

After Dr. Fish Zone, Clare said something about not wanting to eat octopus, so of course, Juan Pablo made the girls eat octopus. WAY TO PLANT THAT SEED, CLARE. Oh, and you bet your ass Clare put on a show. I stood up and started pacing. WHAT WOULD HAPPEN IF SHE ATE THE OCTOPUS? I was so nervous. She had me convinced that something really crazy would go down. When the big moment happened—when she finally ate a tiny piece of octopus—a comet hit the earth and the planet exploded. Really crazy.

Juan Pablo decided he wasn’t going to kiss any girls that evening. Something about not wanting his daughter to see him smooch 20 ladies in one night. Which, what? Are you serious, JP? What the hell? I don’t even… whatever. He and Renee had a one-on-one. Renee was very sweet. They didn’t kiss. He and Andi had a one-on-one. He told her she was bella, too. Gasp! Another bella?! He admired her sense of humor. They didn’t kiss. Lauren S. tried talking him into giving her un beso, but he rejected her. This upset her. He tried to comfort her with the line “take things one day at a time.” Ice cold, Juan Pablo. They didn’t kiss. He and Clare talked. And before I could start pacing again, the train to MackTown was back in business. Translation: They did kiss. BLAH.

Yes, Clare took Juan Pablo to MackTown, but the rose went to… Andi.

Elise and Lauren S. went home. Before Elise left, she said, “My mom didn’t want me to be around such negative, ugly [on the inside] people." Oh. Okay.