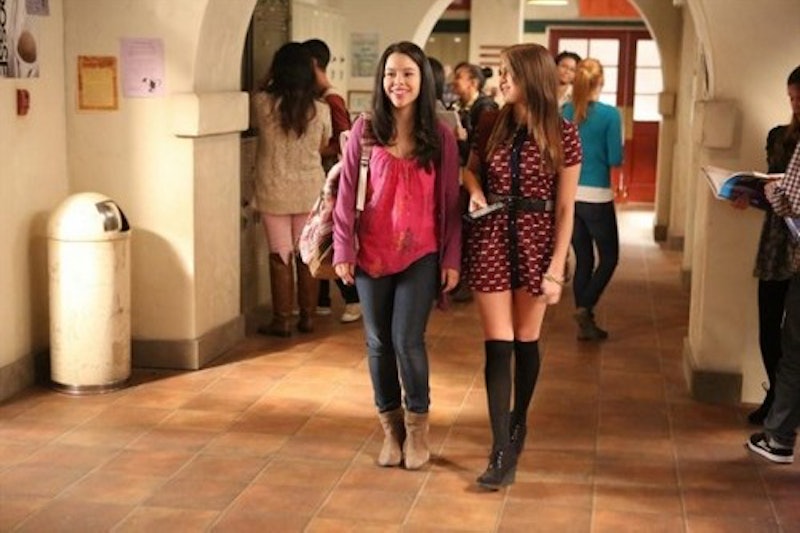 Did I like Monday night's episode of The Fosters ? Sure. It was a great hour of television. But I’m going to be real: It could’ve used more of the little wise owl that is Jude. Jude had maybe five minutes of screen time this week. The episode showed serious promise when it kicked things off with Mariana calling Jude “Judeicorn.” Great start to an ep. “Judeicorn” is the cutest nickname. It set the bar high. But the Jude stuff kind of fizzled out after "Judeicorn." Yes, there were a few very sad (albeit short) “Jude hoards food” scenes. As always, he was incredibly precious and devastating. But beyond “Judeicorn” and the hoarding, we didn’t see much of the show’s best character.

So, what were the other kids up to this week?

Post-Brandon/Callie reunion, Callie’s parole officer gives Lena and Stef a restraining order. He’s like, “Dude. That kid. Tell him to stop being an asshat.” Lena and Stef are like, “FAIR.”

Later, Lena, Stef, and Mike tell Brandon he can’t pop on over to the group home whenever he feels so inclined. Brandon is like, “WE HAVE THE RIGHT TO SEE EACH OTHER. I’M A BAG OF BOOGERS.” Lena Stef, and Mike are like, “Haha, you bag of boogers. Guess what? Here’s a restraining order. We’ll lock your whiny ass up if you go within 100 feet of Callie.”

Mike tries to talk to Brandon about the Callie issue, but it quickly turns into a fight about Mike’s drinking. Mike’s like, “Oh, shit. This didn’t go the way I wanted.”

Mike gives Brandon money for piano lessons BUT BRANDON CANCELS HIS LESSONS AND POCKETS THE DOUGH. The worst? The worst.

Mariana flirts with Theater Crush. He asks her to run his lines with him after school. Kelsey is NOT having it. She tells Mariana that “running lines” is code for hooking up (whoa, I did not know) and is mad at Mariana because she wants to hook up with Theater Crush. Mariana and Kelsey agree to not let a boy come between them. Mariana tells Theater Crush she can’t run lines (girl power!), BUT THEN! Kelsey swoops in and is like, “But IIIIII can run lines.” Mariana is like, “You kidding me?!? What about girl power?!?!” BUT THEN!!!! Kelsey gets detention. She can’t run lines with Theater Crush after school. Mariana is like, "Psh, looks like I won." She swoops the swoop.

Kelsey goes to the principal and rats out Mariana for the pill-selling and the hat-stealing. Yikes. Don't mess with Kelsey when she has a crush. Gloves are OFF.

Stef and Lena let Mariana know she’s been suspended for the pills and reprimand her for hanging out with Kelsey again. No more drama club or Theater Crush for Mariana.

Jesus befriends (be-crushes? But Lexi!) the girl on the wrestling team. He seems to enjoy wrestling. How nice. Well, things go a little haywire when he winds up with a black eye. "How'd he get a black eye?" you ask. A team hazing ritual. One of his teammates punched him in the face. As soon as Lena finds out about it, she yells at the wrestling coach in front of the entire team. Jesus is embarrassed. I’ve never been on a wrestling team, but how is socking someone in the eye a team building activity?!

Callie has stashed a cell phone in the backyard of the group home. I wonder who she’s texting?! BARF BARF BARF.

The girls from the group home go on a field trip to a botanical garden (I think?). At one point during the tour of the grounds, Callie sneaks away and meets up with Brandon. AUGH. How did he know? Oh, right. The stashed cell phone. AUGH. They kiss. AUGH! Callie is like, “You’re going to get arrested” and then smooches his booger-brain face.

Meanwhile, Rosie O’Donnell realizes Callie is missing and breaks off from the group to look for her.

Before Rosie O’Donnell can catch Brandon and Callie in the act, Daphne breaks them up. Daphne is like, “Hey, DUMBASSES.” When Rosie O’Donnell asks what’s going on, Callie says she had to use the bathroom but didn’t want to bother anyone during the tour. Cool alibi, Callie. Daphne vouches for Callie.

Later, the group goes on a bathroom break. Cole stands in the line for the men’s room. A woman asks him to use the women’s room instead because his using the men’s room “confuses” younger kids. A fight breaks out. The girls and Rosie O’Donnell jump to Cole’s defense.

That night, Cole catches Callie using her secret cell phone. He convinces her to hand it over. He says he’s going to get rid of it, and it’s for her own good. But what does Cole actually do? He keeps it and sends the following text to Brandon: “THIS IS OVER. WE’RE DONE.” Hey, Cole? High-five.