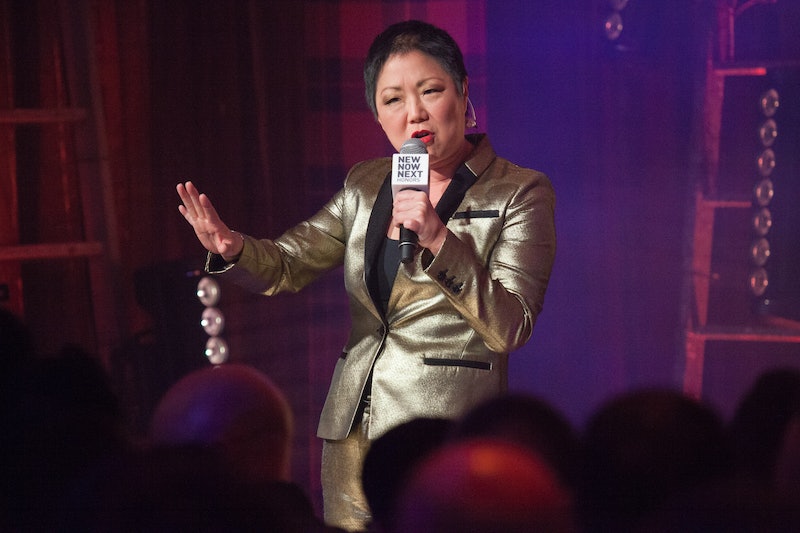 It's only February, and Margaret Cho is already rocking 2016. The comedian is the new co-host of E!'s Fashion Police, she has a new rock album American Myth coming out this spring, and she's developing Highland, an Amazon original dramedy. On top of all that, Magaret Cho is hosting Logo's New Now Next Honors, which air Monday night on Logo at 10 p.m., and she's especially excited about it as a fan of RuPaul's Drag Race. "I'm thrilled," she tells Bustle in an interview. "During the telecast, we get to meet all of the Season 8 competitors, which is very, very exciting, I can't wait."

In a press release, Logo describes the New Now Next Honors as an event that'll highlight the topics and people set to rule in 2016, according to pop culture several experts. The special will cap off Logo's coverage of Aspen Gay Ski weekend, and yes, there will be some skiing during the event, says Cho. "I do know we'll do some drag skiing, which I'm really looking forward to seeing," she says. "What's great is that my friends will be participating — Bianca Del Rio and Ginger Minj — so they'll be featured throughout the whole award show."

But the New Now Next Honors and RuPaul's Drag Race aren't the only things Cho is excited about. Here's what else she has coming up this year, and why each project is so important to her.

Cho proudly joins friend Melissa Rivers as co-host of the series, a venerable institution started by Joan Rivers, who was a mentor and close friend. "For me, it's a great tribute to somebody I worked with and loved for a long time," Cho says.

And it's a hard job during 2016 award season, but she's happy to do it. "We stay up the night before after the award show and we go in very early in the morning to film it," Cho says. "They edit it during the day. It's a very quick turnaround for what we have to do. It's a lot of sleepless nights, but it's worth it in the end."

On April 29, Cho's first album in six years drops with songs such as "Ron's Got a DUI," "Fat P*ssy," and the very personal "(I Want To) Kill My Rapist" (video above). Last year, Cho opened up to Billboard about the sexual assaults and abuse she dealt with in her past, which the song addresses. However, she clarifies to Bustle that the song title is "not about literal bloodshed."

"I don't want to kill anybody," Cho says. "But I do want to murder the memory inside in order to stop it from hurting me. What I try to do as an artist is figure out what needs to be said and say it ... These kinds of things happen and we don't really have a way to see anger for it, so I wanted to write a song that was about that."

Cho will be executive producing this new series with writer and Alcatraz co-creator Liz Sarnoff. The show is based on an idea by Cho, who plays a character that returns from court-ordered rehab and moves in with her dysfunctional family — who run a marijuana dispensary in California. "It brings up a lot of questions around what is really a drug, what is addiction, and what is family," Cho says. "I'm excited about it. I think of it as Dallas, but instead of oil, it's weed. It's about people getting very rich very quickly, which we're seeing a lot of in California and Colorado — people who have benefited very much from this whole boom."

Between kicking off the year by hosting the New Now Next Honors and all of these exciting upcoming projects, 2016 is shaping up to be a great year for Cho.

More like this
Fans React To Kelly Holmes’ “Extraordinary” ITV Documentary
By Sam Ramsden
Here’s Who Victor Chooses In The ‘Love, Victor’ Season 3 Finale
By Brad Witter
The ‘Love, Victor’ Showrunner Gave Fans Hope For A Possible Spinoff
By Brad Witter
Harry Styles Helped A Fan Come Out As Gay In Dramatic Fashion At His London Show
By Jake Viswanath
Get Even More From Bustle — Sign Up For The Newsletter