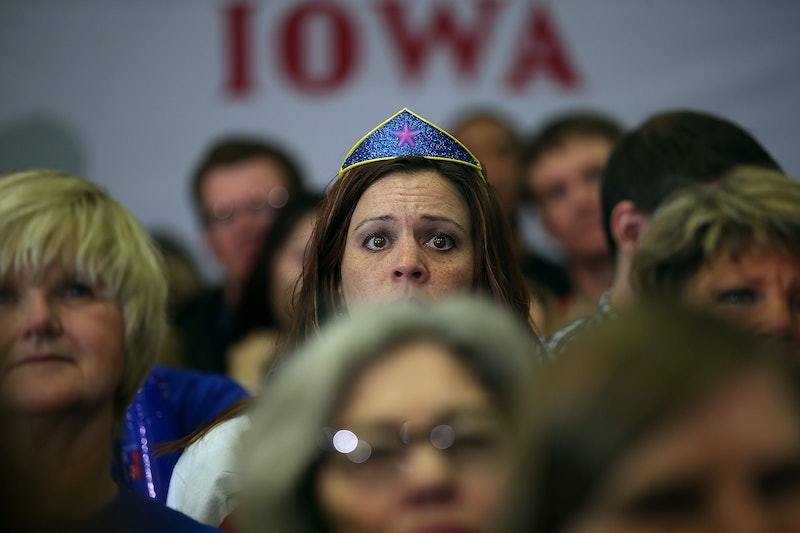 If the general presidential election is the Academy Awards, then the Iowa caucuses are the Golden Globes — fun to watch and sort of important, but no real indication of who is eventually going to walk away with the big prize. Also like the Golden Globes, the Iowa caucuses get the honor of kicking off the season. Since the 1970s, the eyes of the nation have turned to Iowa first to decide who will lead the country for the next four years, granting the huge honor of first dibs to the small, agrarian state. If you plan on sitting with your computer or smartphone in hand all day Monday, anxiously waiting for results, you can give yourself a break. What time do the Iowa caucuses start? Precincts don't even open until 7 p.m. local time.

Approximately 1,700 precincts across the state will hold their meetings in town halls and high school gyms on Monday night so voters can make their voices heard first in the presidential election. Unlike primaries, when polls are open all day and voters can pop by whenever they want, caucus goers must report to their precincts at the specified time to cast their vote. Caucusing takes several hours, which is a burden that sometimes excludes eligible voters from participating, but the community engagement is an endearing and attractive part of the process that keeps people coming back.

The caucuses are structured so differently because the parties get to completely make up their own rules. Rather than voting independently throughout the day, the less formal proceedings go by faster because everyone is participating at the same time. The Republicans still use a secret balloting system, but the Democrats essentially count bodies by breaking into groups of who supports which candidate (like that icebreaker game where people stand on opposite sides of the room based on their answer to a question). Any candidate who gets less than 15 percent of the vote falls below the viability threshold and is eliminated from contention — his or her supporters must then choose a new candidate or abstain from voting, but that's seen as bad caucus manners.

Although the festivities don't begin until later in the day, don't expect to hear about much of anything else in the news on Monday. Iowa caucuses are always a huge deal, and in this crazy election season, this is going to be the biggest story everywhere. Right now, the polls are extremely close, especially in the Democratic race, in which Clinton's small advantage is well within the margin of error for most polls. The Republican race is closer than expected, too — Trump and Cruz have both lost ground over the last week, while Rubio and Carson have seen spikes in support. The Iowa caucuses could be a huge upset for some candidates, and that's something you won't want to miss. Tune in at 7 p.m. CT to follow the results live.