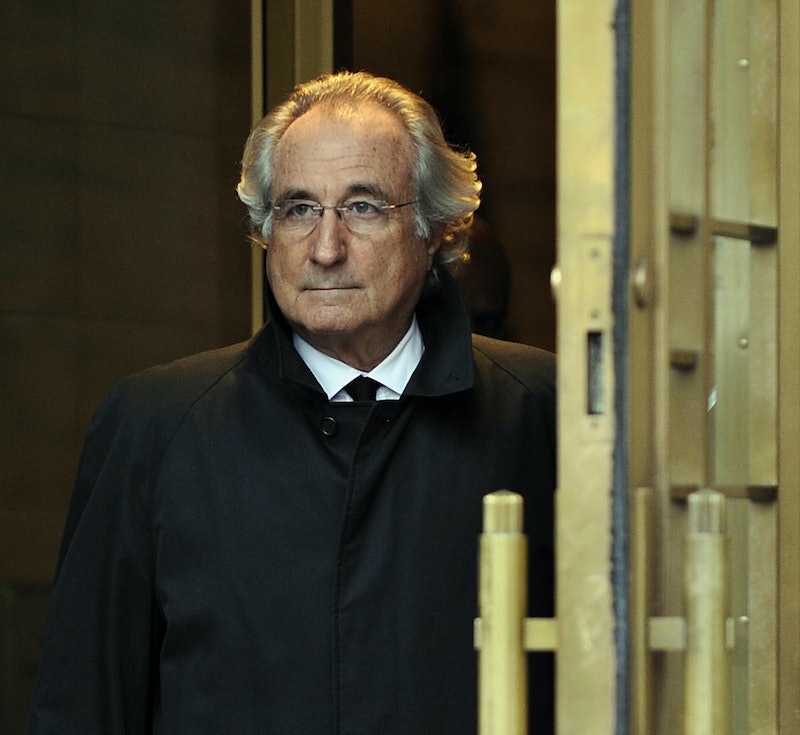 Bernie Madoff's story is going from real life scandal to onscreen drama with a two-part ABC miniseries airing Wednesday and Thursday. But, seeing as the man himself is still alive (and in prison) — what does Bernie Madoff think of ABC's Madoff ? So far, Madoff has not made any public comments about the series, and, when Bustle reached out to his 2009 lawyer Ira Lee Sorkin, he informed Bustle that, while he's still in touch with Madoff, he no longer represents him and cannot offer a statement on Madoff's opinion of the series. Sorkin also said he doesn't believe Madoff has counsel right now.

But, even if Madoff did figure out a way to see the series from behind bars, I'm not sure how much he would like it, because the former financier doesn't see himself as a villain. In his most recent major interview with Politico in mid-2014, Madoff said, "There’s nothing for me to change from. It’s not like I ever considered myself a bad person. I made a horrible mistake and I’m sorry."

However, Richard Dreyfuss is not going to be playing Madoff with that much generosity. While many actors might try to sympathize with the character they're playing, Dreyfuss considers Madoff to be a sociopath, according to Smithsonian. "He never once thinks of, considers, even frames an image of his victims," the actor claimed to the magazine. "Moral people know the difference between right and wrong and do right. Immoral people know right and wrong and choose to do wrong. Amoral people don’t know the difference."

Judging from his Politico interview, it seems that Madoff knows that what he did was wrong, and in an interview with Barbara Walters in 2011, he claimed that he does feel guilty about his actions, so I don't know if Madoff would agree with Dreyfuss' assessment.

But, while Madoff hasn't commented on the upcoming miniseries, his wife, Ruth Madoff, did consult with her Madoff counterpart, Blythe Danner, The Street reported. And, in contrast with Dreyfuss, the actress found quite a lot of sympathy for the man's wife. "I really don't believe she knew," Danner claimed to The Street. "Bernie was just such a sociopath that he could keep it from just about everyone, including his own family." Bustle reached out to Ruth's lawyer but has not yet received a reply.

But, Dreyfuss specifically avoided speaking with Madoff, he told The Jewish Journal. "The chances were that he wasn’t going to tell me the truth, and I wasn’t interested in listening to him rationalize or justify," Dreyfuss said to the paper. Instead, The Jewish Journal reported that the writers and producers used many other resources such as speaking to former assistants, listening to old interviews, speaking with victims, and reading the book The Madoff Chronicles. When asked about the accuracy of the series, a spokesperson for ABC gave this statement to Bustle:

The only person who definitively knows what really happened is sitting in prison in North Carolina — Bernie Madoff himself. Madoff is a scripted piece of fiction based on truth inspired by reporting on the crime and on ABC News Chief Investigative Correspondent Brian Ross’ book, The Madoff Chronicles.

Given that Bernie Madoff has explained that sees himself as a fundamentally good man who made a mistake, while the man playing him called him a sociopath, it seems that this ABC miniseries will not include a portrayal that will humanize or flatter Madoff, and, as such, my guess is that it will not be to the real Madoff's liking. But, it doesn't seem as though pleasing the subject of the story was the goal of this miniseries' writers. After all, the fact that the actor playing Madoff told The Jewish Journal, Madoff's crimes are "impossible to forgive," doesn't exactly scream sympathy.