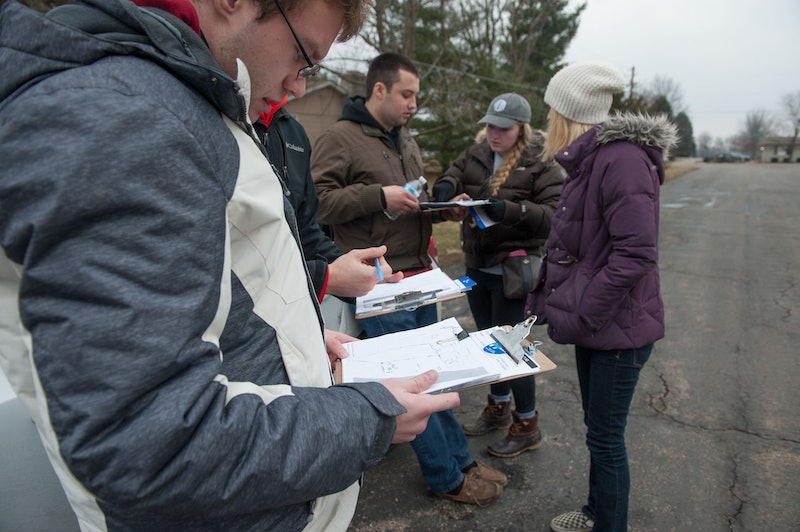 On Monday, registered Republicans and Democrats in Iowa will participate in their ever-important and much-anticipated presidential primary caucuses. The primary voting process in Iowa is unlike anywhere else in the country, but it's likely this uniqueness, combined with its early date, that makes it so exciting to those even outside the Hawkeye State. All the action will begin promptly at 7 p.m. local time, but the caucuses might not end for hours, depending on how quickly voters can come to their conclusions.

Unlike primary voters in other states, Iowa voters on both sides of the political spectrum will have to listen to some sort of campaign speech or political banter before casting their votes. The Republicans and Democrats caucus differently, but both processes are more involved than just waiting in line for a machine and clicking a candidate's name. For one thing, shortly after the caucuses begin, the doors at all sites will close to keep any late arrivals out. In states with traditional primaries, voting locations are usually open all day so that voters can participate at a time that works with their schedules. But Iowa voters don't have that luxury, and this more compact voting window could mean a late night for all those involved.

The Republican process is pretty straightforward. Voters listen to an address from each campaign, and then cast their votes via secret ballot, sometimes using a specific form and sometimes using just a blank piece of paper on which they can write a name. With so many campaigns to hear from on the Republican side, the process could take significantly longer than in previous elections — however, it remains unpredictable.

On the Democratic side, participants congregate (by physically standing near each other) to show support for their preferred candidate. After an initial gathering period, the populations of each group are totaled, and candidates with fewer than 15 percent of the vote are eliminated. These candidates are considered "nonviable," and their supporters are able to realign with a different group in the room. The process continues until there are no nonviable candidates left. The Democratic process is unpredictable also, although it's expected that, due to low poll numbers, former Maryland Gov. Martin O'Malley will be the first candidate eliminated.

As they're more participatory and more complicated than the process that the rest of the country is used to, the Iowa caucuses' running times can vary greatly. This year, Microsoft has introduced technology that it hopes will speed up the process by allowing local precincts to report the results faster. Still, with so many candidates and the pointedly unpredictable race we've seen so far, Iowans and interested viewers elsewhere could have to stay up late to learn the outcomes.