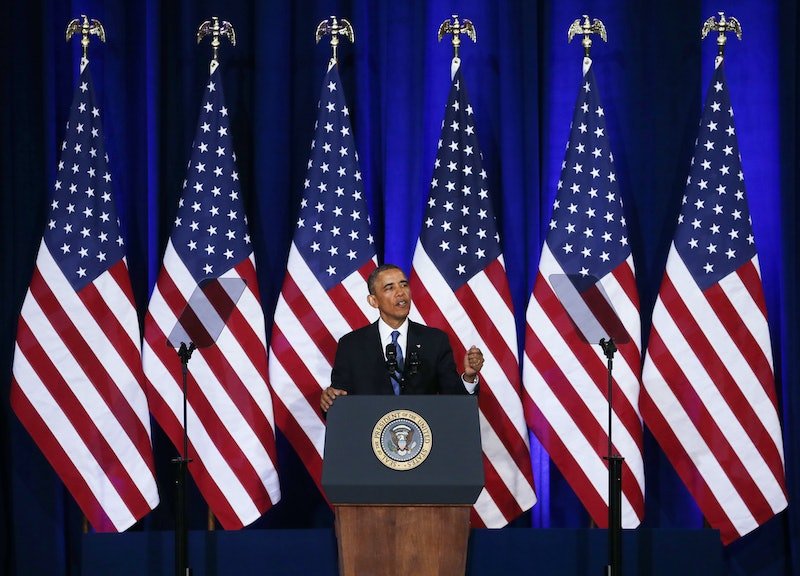 Ugh, Congress is just so slow sometimes — which is why President Obama's taking matters into his own hands by issuing an executive order to raise the minimum wage for employees working for federal contractors. Tuesday's announcement comes conveniently right ahead of tonight's State of the Union address. Gotta feel bad for those contractors: They got a little shafted during the whole shutdown thing last October, having to get by without wages altogether (unlike federal employees who got back pay at the end of the whole debacle).

The order, according to administration officials, mandates that janitors, builders, and pretty much everyone else working for federal contractors be paid $10.10/hour, the wage proposed by Democrats in their presidentially-endorsed plan. It's just the first step for Obama, however: "The President is using his executive authority to lead by example, and will continue to work with Congress to finish the job for all Americans by passing the (congressional) bill," a White House statement foreshadowed.

The move (quite a maverick one, as Sarah Palin would say) is designed to pave the way for the eventual passage of the Democrat's proposal, which would raise minimum wage for all workers from $7.25/hour to the $10.10 that's expected to be ordered by Obama. And whether for good (in this case) or bad (hello, NSA), it also signifies a move by the president to bypass Congress if they're not moving quickly enough for his taste.

It also signals a potential change in his approach as president. But a new New Yorker profile of the president by David Remnick suggests Obama remains hesitant about the use of executive orders. As Slate summarizes:

The Obama of the New Yorker profile wears the limitations of his office like a shawl. “At the end of the day we’re part of a long-running story,” the president says. “We just try to get our paragraph right.” At another time he describes himself as “a relay swimmer in a river full of rapids, and that river is history.” To the crowd at a Democratic National Committee fundraiser that applauds a heckler’s insistence he use more executive orders, Remnick reports him responding: “Before everybody starts clapping, that’s not how it works. We’ve got this Constitution, we’ve got this whole thing about separation of powers. So there is no shortcut to politics, and there’s no shortcut to democracy.” His parting words to Remnick are about limits. “The President of the United States cannot remake our society, and that’s probably a good thing. Not ‘probably.’ It’s definitely a good thing.”

Amid all the rhetorical proposals of today's State of the Union that will inevitably lead to bipartisan bickering, it's nice to see some action for the everyman actually happening. The only downside is that this might not affect that many people: The order only applies to those who have contracts signed after the order, and would only apply to renewals if different parts of the contract are also modified — at most, we're talking a hundred thousand employees or so.