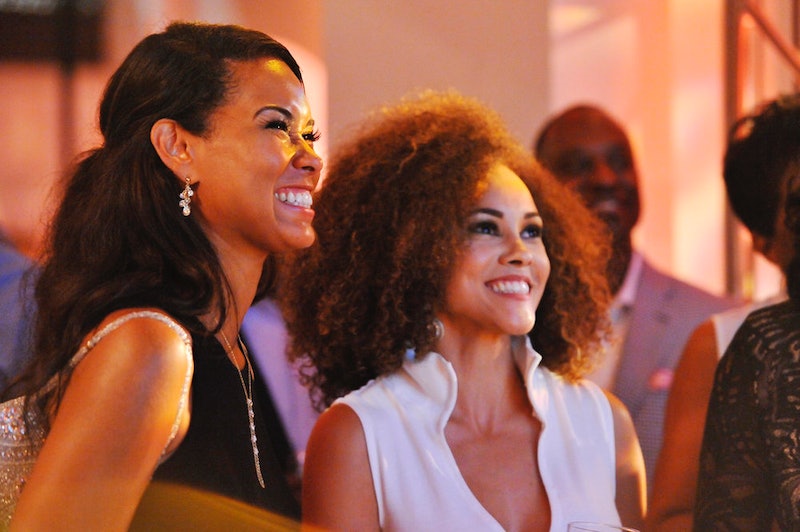 Nothing is harder than making new friends when you don't quite fit in, right? So maybe that's why I'm so sympathetic to Ashley Darby on The Real Housewives of Potomac, who as a young newlywed has been struggling to be accepted by the stuffy other women in the community. But in a valiant effort to fit in, Ashley took the RHOP whiskey tasting, and while I think most groups of friends would have enjoyed the free alcohol, the women of Potomac were a bit scandalized by liquor — they all seem to prefer champagne. Even so, they managed to get down at least four glasses of the brown stuff, and the rest of the crowd seemed to be having a great time, even though the tasting was in a basement (yet another shocker for these women).

And after downing all that whiskey, you'd think that the Real Housewives of Potomac would be able to get along, but even an innocent conversation turned into a spiraling conflict. First Charisse and Gizelle rehashed their disagreements from the pilot episode. And then Ashley's unfortunate grinding was brought up. But the youngest member of the cast was able to forgive and forget, offering Robyn a heartfelt apology for making her uncomfortable instead of getting defensive, or even blaming it on the age difference. Instead, she owned up and proved that she is wise far beyond her years.

As Charisse pointed out, Ashley's willingness to both apologize and forgive over Gizelle's "THOT" comments was incredibly mature compared to the petty bickering that was going on. And her behavior embarrassed her so much that she wound up apologizing to Gizelle! Impressive, since I don't think it was the whiskey doing the talking. So even though Ashley might not have the exact same tastes as the rest of the RHOP, when Karen officially initiated her into the circle, she more than deserved it.