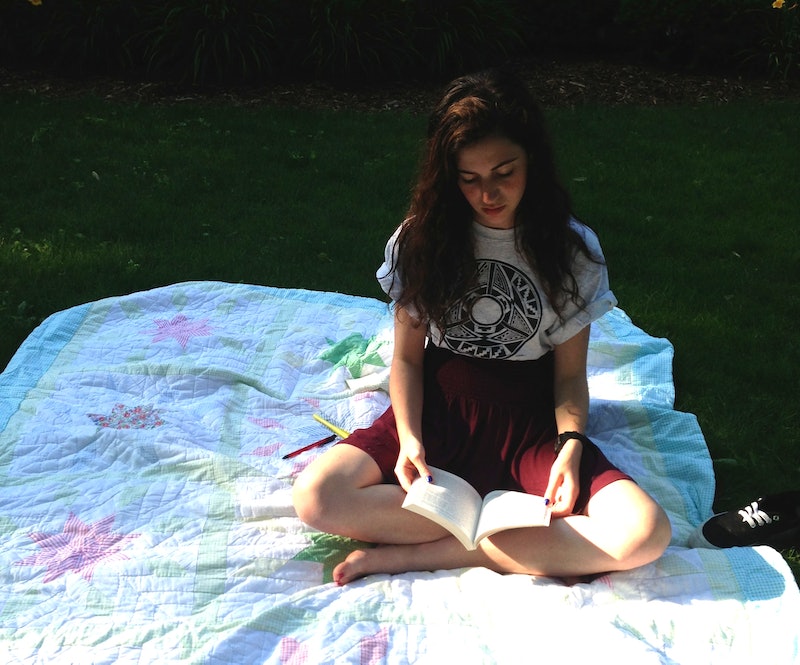 For me, growing up a Jewish girl meant looping my fingers through neon plastic lanyards at summer camp, enduring glossy toe-pinching shoes reserved only for synagogue, and finding stray bits of sticky matzo-ball dough caught in my curly hair on afternoons spent with my grandmother.

Later, this meant cultivating playlists based purely off of bat-mitzvah throwbacks — (un?)surprisingly, often the most popular mixes at parties — engaging in about a million rounds of Jewish Geography (Sarah Goldstein? Jacob Weiss? Alex Katz? I’m sure you know them too), and developing a semi-ironic appreciation of Manischewitz.

Let’s be honest: While I still love a good round of Jewish Geography, and I never did seem to get it together enough to get the last of the matzo-mix out of my hair, what most greatly impacted my Jewish Journey were the fictional Jewish voices I encountered and came to emulate along the way. The complex characters I met through the pages of the books they didn’t teach at Hebrew school, and the remarkable places they lead me, conveyed a strange sense of déjà vu: being both oddly familiar, yet totally foreign. I saw through these books an almost mirror image of myself, a portrayal of not only who I was, but also who I could have been, if only born with a different name, in a different country, in a different time, and a glimpse of the type of Jewish woman I wanted to become.

Through countless ups and downs and Judy Blume moments, these books became my lifeboats, my mentors, and my friends. So if you find yourself a counselor for eight weeks at a Kosher canoe camp in the mountains, or stranded with Bubbe for a weekend of mahjong and questions about the dubiously existent NJBs in your life, and in need of a reminder of why membership in the Tribe is something to be not only cherished, but inspired by, try grabbing one of these remarkable Jewish tales of sorrows, simchas, and incomparable insight.

1. For The Relief of Unbearable Urges by Nathan Englander

Laden with an imaginative cast of acrobatic concentration camp-escapees, an orthodox man granted rabbinic dispensation to visit a prostitute, the best of the Yiddish writers all awaiting their death all together in one room, and an observant wigmaker on a quest to feel beautiful again, the short stories contained in Englander’s debut work, For the Relief of Unbearable Urges, offer an unprecedented glimpse into worlds I had only heard about, with emotions so real and so raw, these foreign stories were instantly relatable. Teetering on a tightrope between criticism and compassion, snark and sincerity, For the Relief of Unbearable Urges opened my eyes to worlds of Jewish half make-believe as beautiful as they were bizarre.

2. Suddenly a Knock at the Door by Etgar Keret

As a reader, I feel inexplicably grounded throughout the diverse, impossible, and previously unexplored worlds of Suddenly a Knock on the Door. As if revealing to a friend the magic implicit in streets of Jerusalem, the challenges of losing a loved one and the peculiar encounters with the afterlife, Israeli author Etgar Keret stitches together emotionally packed scenes into short bursts of fiction, producing a finished collection that is at once charming, terrifying, and completely exhilarating.

The language alone induces a quiet recognition of weight, simultaneously solemn and joyous. The world Anne Michaels introduces her readers to throughout Fugitive Pieces is rich, haunting, and written in a prose both stunning and surreal. From the first pages in which a small boy, Jakob Beer, emerges caked with dust from the bog after escaping the Nazis, to the last in which a professor, named only Ben, traverses through Greece, Toronto, and both Beer’s past and his own, I was constantly astounded the poetic prose, the interweaving narrative (which successfully spans time, continents, and multiple narrators), and the truly heart-wrenching content.

4. The History of Love by Nicole Krauss

Following in the footsteps of a New York girl named Alma, The History of Love embraces mystery, wit, and enthralling adventures of a girl out to cure loneliness (and for more people than she originally intends). Similar in unconventionality of form to books such as Extremely Loud and Incredibly Close, critically acclaimed The History of Love is poignant, fresh, and utterly enjoyable as it spans worlds, times, and narrative voices.

Exploring tradition, loss, and a love that transgresses all societally sanctioned boundaries, Naomi Alderman’s Disobediance dares to ask what happens when personal desire comes directly at odds with communal norms. Ronit Krushka, heroine and obstacle in her own love story, emerges entirely as the other in a spectacular tale probing commitment to self and community, and spanning the distance between the two.

We may have all had run-ins with the Jewish men in black hats who stand outside bus stations and on street corners around Sukkot, asking “Are you Jewish?” and then follow up by offering the chance to wave a bundle of sticks, lulav and a big yellow fruit, etrog, but what do we know of their sisters? Their wives? Their daughters? Mystics, Mavericks, and Merrymakers offers a nonfiction peek past the curtains of women who live as Hassidim, preserving tradition and faith in a modern world. After spending a year living among the Lubuvitch Hassidic community of Crown Heights, New York, Stephanie Wellin Levine traces with respect and honesty the unquestionably distinct lives of women who live in a community so often perceived as homogeneous.

Harsh, beautifully constructed, and at times unbearably cruel, literary classic American Pastoral exposes the ugly underbelly of political, domestic, and social turbulence for a family of characters for whom it is impossible to see eye to eye. Promising, as always, passion, wrath, and unabashed sympathy for characters who may otherwise seem irredeemable, Philip Roth’s American Pastoral will make you question what it means to gain experience and tune in more keenly to the interminable buzz of everyday life humming around you.

8. The Puttermesser Papers by Cynthia Ozick

Set in seductive New York, yet completely unlike Eve in the Garden of Eden, Ruth Puttermesser isn’t willing to take a bite of the Big Apple. To the contrary, Puttermesser, a thirtysomething, self-proclaimed feminist living alone under a bridge, tries desperately to restructure New York and reform herself, passion-free, in the vain hopes of creating an “Eden” on earth and an “Eden” within. But even Ruth Puttermesser cannot conquer the city, or herself, alone. Borrowing from Jewish folklore, Ozick aids Puttermesser with a golem, Xanthippe, to aid her in her mission. With daring prose, a crew of fascinating characters, and images that pack a punch, The Puttermesser Papers not only captivate, but perhaps prove that even golems cannot hasten the return of Eden on earth.

9. The Unbearable Lightness of Being by Milan Kundera

The Unbearable Lightness of Being is fashioned with exquisite prose and an interlooping semi-circular design. The narrative weaves fluidly through lofty metacognition and the ordinary musings of characters whose lives has come apart, and perhaps brought together, at the seams. The relationships, even in the smallest of interactions are as layered and nuanced as the visual imagery is unique and intricate as Kundera begs his readers to consider all the lives they might have lived, if only they had altered but one choice.

One of Israel's most beloved and prolific poets, Yehuda Amichai writes on sex, God, politics, and loss, all with a sincere and a psalm-like insight that at once both captivates and stuns his readers. Reading Amichai's selected poetry is as delicious as biting into the sun-soaked fruits he plants in his prose and as humbling as walking down the bustling Jerusalem streets he conjures through couplets.

More like this
Where Is John Leonard Now After Suing Pepsi For A Harrier Jet?
By Brad Witter
'Bridgerton' S3 Teases Exciting Social Season For Penelope Featherington
By Bustle
The 'Lady Chatterley's Lover' Book Leaves Us With A Troubling Question
By Catharina Cheung
Lib & Will’s Romance In 'The Wonder' Is Very Different From The Book
By Sam Ramsden
Get Even More From Bustle — Sign Up For The Newsletter