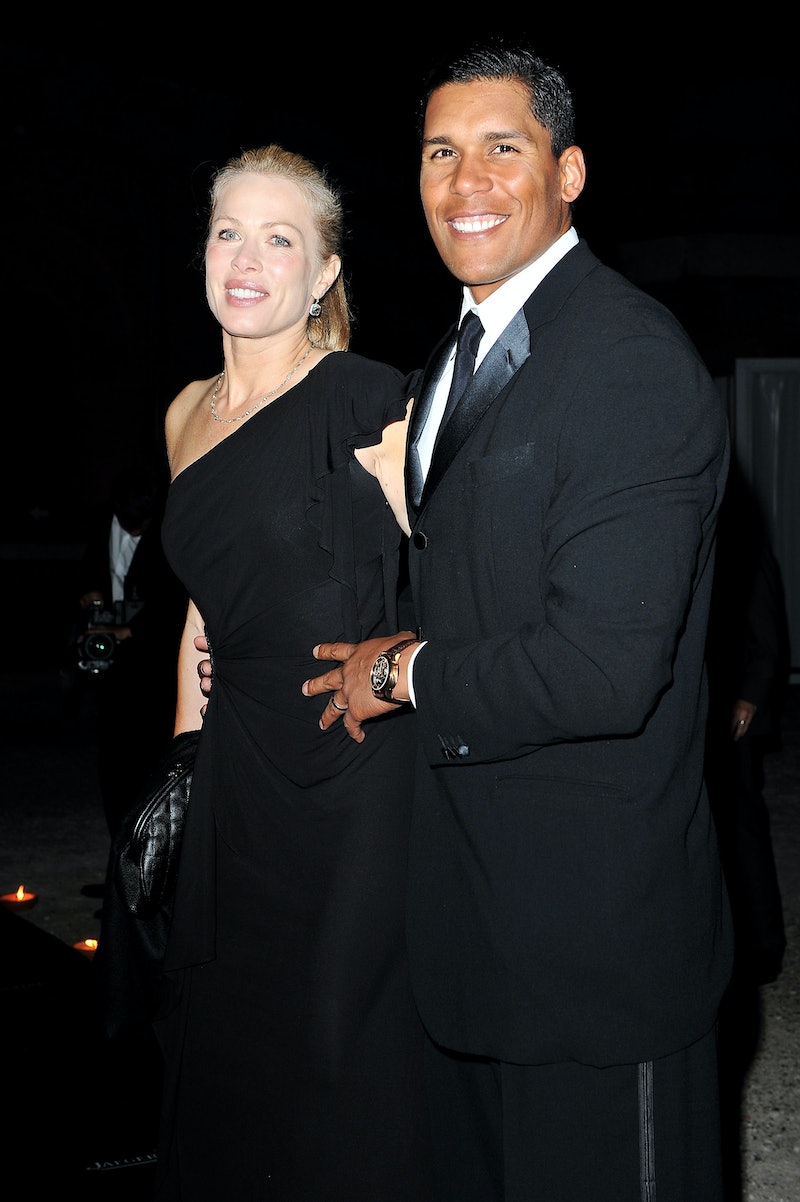 There is a major The Real Housewives of Beverly Hills and The People vs. O.J. Simpson crossover happening right now, because just as Connie Britton is playing her on the FX show, Faye Resnick's past words are coming back to haunt her on RHOBH. Basically, Kathryn Edwards doesn't like what Resnick said about her in Resnick's book, Nicole Brown Simpson: The Private Diary of a Life Interrupted, which was published way back in 1994. But, why is Edwards' name in the book at all? Did Kathryn Edwards even know Nicole Brown Simpson? Well, according to Resnick's written word, Nicole Brown Simpson allegedly had an affair with Edwards' ex-husband. (Something that People reported both Edwards and her ex-husband deny.) Edwards hasn't been afraid to challenge Resnick's version of events, calling Resnick out for mentioning her in the book when the two met face-to-face on RHOBH. But, adultury allegations aside, there was another connection between Edwards and Nicole: O.J. Simpson.

O.J. was a friend of Edwards' ex-husband, Marcus Allen, and both members of the couple were close with the football star. In his autobiography, Allen wrote that, at Edwards' request, the couple even hosted their wedding in 1993 at O.J.'s home in California. Allen wrote, "She had asked O.J. if we could have the ceremony at his home in Brentwood and he had immediately set about making arrangements." The couple's wedding video was later broadcast on Hard Copy , a tabloid news show, after charges were brought against O.J. after the deaths of Ron Goldman and Nicole. O.J. was acquitted of those charges during the criminal trial, although he was found liable in the resulting civil suit, and CNBC reported he had to pay "$33.5 million, made up of $8.5 million in compensatory damages to the Goldmans and $25 million in punitive damages to be split between the Goldmans and Nicole's children."

Resnick's accusations about Edwards and Allen's marriage were not totally fabricated out of thin air. While testifying during the 1996 civil suit trial, Allen claimed that O.J. allegedly asked him to lie about having a romantic relationship with Nicole, as reported by CNN. Allen's testimony, according to CNN, alleged that O.J. asked Allen to lie in order to paint O.J. as a non-jealous ex, who couldn't possibly have been motivated to kill Nicole, since O.J. had thrown Allen's wedding.

As with everything in the O.J. trial, there's no way to parse what's true from what's false, but Edwards and Allen both maintain that Allen never had a relationship with Nicole, and CNN reported that Allen ended his friendship with O.J. because of the alleged request. O.J.'s 1996 lawyers declined to comment to reporters on the subject, according to The Spokesman-Review.

So, while Edwards and Nicole Brown Simpson maybe weren't super-close friends, both she and her ex-husband were in the same social circle, and Allen even became a part of the trial. So, if anyone is prepared to call Resnick out for the things that she's said and published, it's Kathryn Edwards.