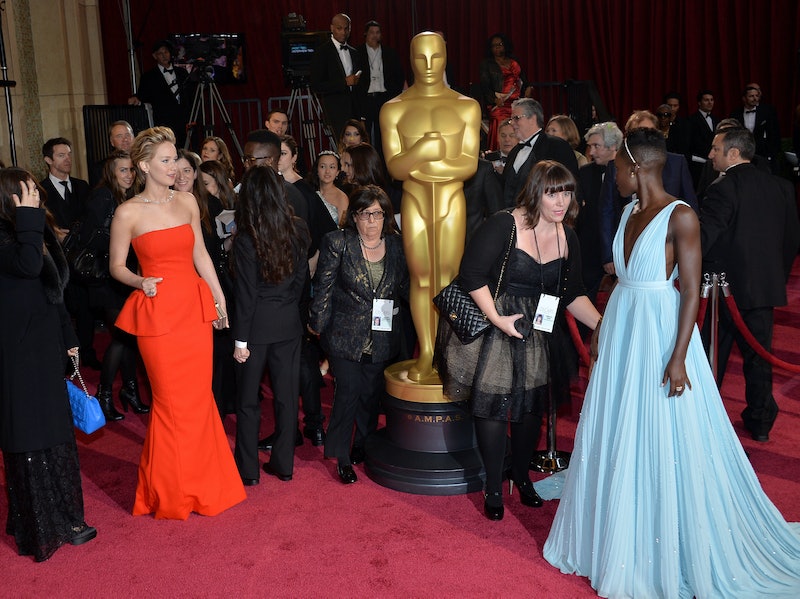 I try to reserve one standing ovation a day just in case someone does something really monumental, and I'm awarding it to Vanity Fair 's Hollywood Issue, featuring a cover populated by a broad spectrum of women. And, no, I didn't say their Women In Hollywood issue, or their Diversity In Hollywood issue — this is just a regular old Hollywood Issue, in which they have quietly, and without any fanfare elected, to highlight and honor a group of women diverse in age, race, and experience, tied together by their monumental talent.

There are the five nominees for the Academy Award for Best Actress — Jennifer Lawrence for Joy, Cate Blanchett for Carol, Saoirse Ronan for Brooklyn, Brie Larson for Room, and Charlotte Rampling for 45 Years — and they're flanked by other impressive contributors to the field of acting. Everyone from Viola Davis to Alicia Vikander to Diane Keaton to Lupita Nyong'o to Rachel Weisz to Helen Mirren to Gugu Mbatha-Raw to Jane Fonda is included on the cover, and the sight of them all spread out together, staring straight into the camera and forming a solid wall of no-nonsense lady power, honestly gets my pulse up. In the best way.

Imagine being a little girl and seeing this as a representation of power in Hollywood right now. These really are the movers and shakers at the moment, and it's an impressive, formidable group that doesn't suffer at all from the lack of male presence on this cover. But, like I said, the best part of all of this is that Vanity Fair didn't put out an initial cover of all white actors, or a group of actors that skewed heavily male. Of their own accord, they picked out 13 of the most influential and iconic figures in Hollywood, and they all happened to be female. And not just female, but a group of women spanning almost six decades, from ages 21 to 78, including ladies of Irish, Swedish, Mexican-Kenyan, British, Australian, French, and American descent. Hell. Yes.

Oops, I'm in love. Not only with all these talented actors, but with Vanity Fair for the quiet inclusiveness of their 2016 Hollywood Issue. I couldn't be prouder proud of everyone involved.