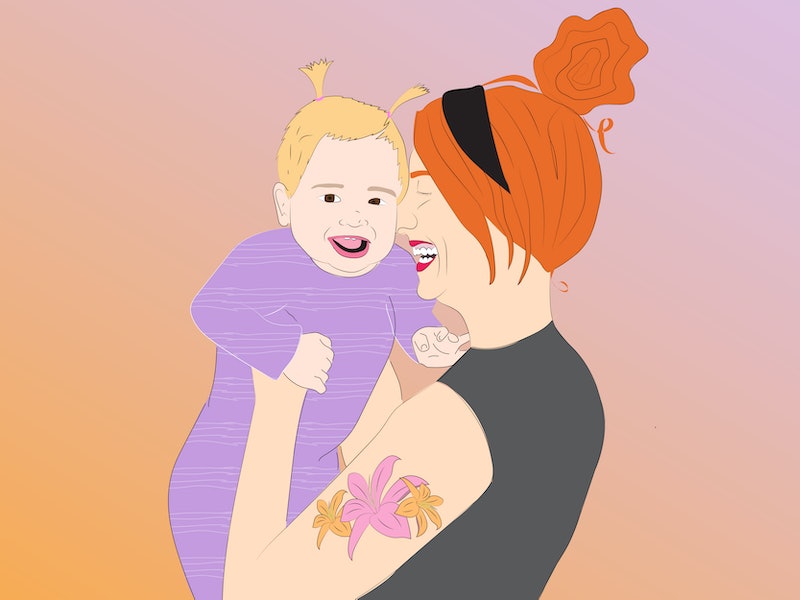 The whole baby-naming thing is insanely stressful — I mean, I do not have a child and do not plan on having a child anytime soon, but I still get stressed out by everything you have to consider. What does it mean? What does it rhyme with? What horrible nicknames can it yield? Does it rhyme with your last name like a weird cartoon character? Is it a family name? Will people in your family be mad? Here's a thought: Name your offspring after an important human. Here are some baby names you probably didn't realize are feminist. Just, like, some suggestions.

I should clarify, by the way, what I mean when I refer to a name as "feminist." I don't mean that the act of naming your child Emma or Frances will actively contribute to overthrowing the patriarchy — unless you are giving your child a gender neutral name, although let's be real: "Gender neutral" rarely refers to more traditionally feminine-sounding names, which is a little problematic. However, I am getting off on a tangent and this is where it ends. I promise.

In any event, acknowledging people who sacrificed everything to fight for the rights of women, by remembering people who are often forgotten by textbooks, people whose names are said aloud too rarely, is to continue the legacy and the fight. And one day, when your child asks you where their name came from, you can tell them. "I named you after the founder of anarcha-feminism," or "'Mia' is the name of my childhood hero, and she was my hero because she was all for girl power, and she was strong, and so are you."

The most popular baby name of 2015 has been around for a while, long enough to belong to one of my favorite feminist anarchists, Emma Goldman. Emma Goldman advocated for the rights of working-class and immigrant women, for birth control, and for the acceptance of homosexuality. Check this amazing quote from 1897: "I demand the independence of woman, her right to support herself; to live for herself; to love whomever she pleases, or as many as she pleases. I demand freedom for both sexes, freedom of action, freedom in love and freedom in motherhood."

Growing up, Mia Hamm was a personal hero of mine. Not necessarily because of her soccer skills, though those two Olympic gold medals are super cool, but because of this quote that I had hanging next to my bed for years: "My coach said I run like a girl, and I said if he ran a little faster he could, too."

A classic name whose popularity peaked in the early 1900s, Frances not only belongs to one of my best friends (hi, Frances!), but also to Frances M. Beal, a badass intersectional feminist. Frances Beal was a member of the Student Nonviolent Coordinating Committee (SNCC), one of the most important organizations in the Civil Rights Movement. Increasingly frustrated at the pervasive sexism she and other female activists faced, Beal became a founding member of the SNCC's Black Women's Liberation Committee, and published "Double Jeopardy: To Be Black and Female," a seminal feminist text, in 1969.

"Ana" means "serene"; also, French-Chilean rapper/singer Ana Tijoux, who released the controversial anthem "Antipatriarcha" last year, serenely kicks ass. With (translated) lyrics like, "I can be anything of everything, it depends what you call me/ But I won't be the one who obeys, because my body belongs to me," Tijoux makes a stand for the powerful women forgotten by history books.

Ruth Bader Ginsberg deserves every ounce of pop culture fame that she receives, but sometimes it feels as though people forget there are actually three female Justices on the Supreme Court right now. Sonia Sotomayor is the first Latina, the third female, and one of the youngest ever Justices. She continues to fight for a woman's right to her own bodily autonomy.

Mary is a super old-school name, so it's fitting that it belongs to a super old-school feminist: Mary Wollstonecraft. And by old-school, I mean she was advocating for women's rights in the 1700s, well before feminism was a thing. In her 1792 piece, "A Vindication of the Rights of Women," Mary Wollstonecraft argued that women are not inherently inferior to men; rather, a systematic lack of education puts them at a continued disadvantage. Yaaas, Mary! As it turns out, Mary's daughter, Mary Shelley, wrote a little book called Frankenstein, which just happens to be the most taught work of fiction in the United States right now.

Sure, you could name your daughter "Alice" after "Alice in Wonderland." Or after Alice Waters, the chef who made the salad famous. But personally, I'd go with Alice Walker, the prolific poet, writer and activist. Alice Walker coined the term "womanism," which references specifically "black feminism," in response to feeling marginalized and silenced by the larger feminism movement. She continues to write about the intersection of sexuality, spirituality, race, and feminism to this day.

More like this
Beyoncé & Madonna’s “Break My Soul” Remix Honors A Group Of Black Icons
By Stephanie Topacio Long
We’ve All Had Bad Sex. Nona Willis Aronowitz Is Talking About It.
By Sophia Benoit
25 Things I've Reduced My Life To, In Addition To WFH In My PJs
By Ginny Hogan
The Spiritual Meaning Of The August 2022 New Moon
By Nina Kahn
Get Even More From Bustle — Sign Up For The Newsletter