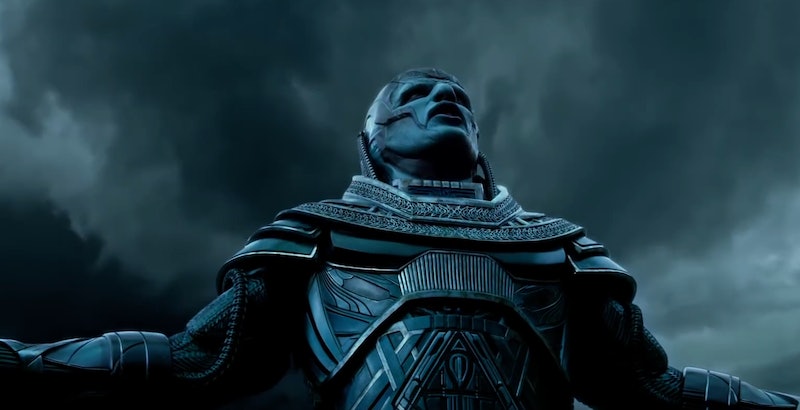 X-Men: Apocalypse is already one of the most highly anticipated movies of 2016, and it's only February. The third film in the X-Men reboot franchise brings back stars Michael Fassbender, James McAvoy, and Jennifer Lawrence, but what really has people talking are the new cast members joining the mutant gang. For this movie, director Bryan Singer brought in Game of Thrones star Sophie Turner, up-and-comer Kodi Smit-McPhee, and The Newsroom's Olivia Munn. But the real thrill is the actor who plays Apocalypse, the film's big bad. It's Oscar Isaac in the role of the titular villain, making a leap from one major franchise to another.

Isaac had an epic 2015. He co-starred in the biggest movie of all time, Star Wars: The Force Awakens; became one half of a beloved ship (long live FinnPoe); and won a Golden Globe for his role in HBO's Show Me A Hero. But, just because you know Isaac from his major year doesn't mean you'll be able to recognize him in his mutant X-Men form. Briefly shown in the second X-Men: Apocalypse trailer, Isaac is completely unrecognizable in the role. Everything from his voice to his face is different, as to play Apocalypse, Isaac dons blue makeup and heavy armor, transforming the actor from regular guy to demi-God.

Apocalypse is known as the first mutant — a mythical and powerful creature who some believe inspired the concept of God. Needless to say, the role marks a big change for the actor, who thus far has earned success playing mortals, like the struggling folk singer in Inside Llewyn Davis, or the arrogant genius in Ex Machina. Even in Star Wars: TFA, Isaac played human pilot Poe Dameron, who, as far as fans know, does not possess the Force. After years of working in realism, it's no wonder Isaac jumped at the opportunity to do something a little more out there with Apocalypse.

And there's no doubt that the idea of hiding under a few pounds of makeup and giant armor sounded appealing to the rising star, especially given the intense fame that comes with being a part of the Star Wars franchise. Isaac said in an interview with Black Film that he is excited to have the opportunity to play two major roles in two major franchises, saying, "I'm just having fun at this time and I'm really thankful and blessed that I'm getting the opportunities to play different roles and let's people know that they never know what to expect from me. I'm very excited. We'll see how many people realize that Apocalypse and Poe are the same person."

Fans who have already fallen in love with Isaac on screen might get a bit of a shock seeing him as Apocalypse, but, just remember, under all that evil makeup and prosthetics is the same old Oscar Isaac we all know and love.

More like this
Stephen Graham’s Wife Plays A Vital Role In His Career
By Emma Madden and Sophie McEvoy
Everything To Know About The Musical 'Joker' Sequel – & Lady Gaga’s Role
By El Hunt and Sam Ramsden
Sky’s New Princess Diana Doc Tells Her Story Like It’s Never Been Told Before
By Frances Stewart
What Is Brad Pitt’s Net Worth? The Bullet Train Star Now Makes 8 Figures Per Film
By Hugh McIntyre
Get Even More From Bustle — Sign Up For The Newsletter