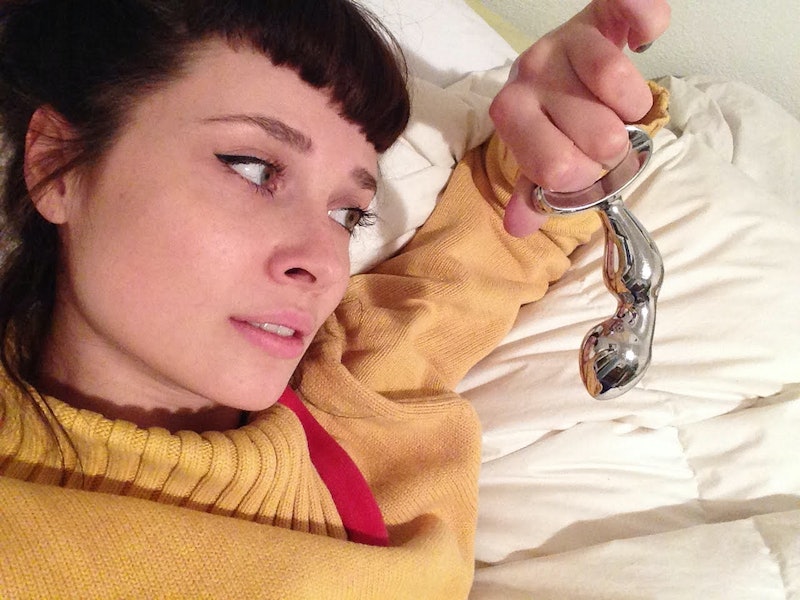 So, I prescribed myself a full week of butt play while I was on vacation to get me back on track. There were no rules, the only requirement was that I HAD to play with my butt every day. Anal sex with a penis was not my goal for the week, even though I was hoping I’d be ready by the end. The butt is ever so sensitive, and needs to be wined and dined before you can take the plunge, so I figured a good week of butt play would be a great way to progressively get my ass back in action.

Even though I was rearing to go initially, my excitement quickly vanished when I got ready to actually get down to business. I still wanted to go forward with it, but butt play just seemed like a chore when I thought about it. I wasn’t afraid of getting injured so much as I just wanted to play with my pussy instead. I had to remind myself that I really wanted this, my week-long butt experiment was for no one other than me, and I knew I’d regret it if I didn’t at least make an attempt. This was going to be fun, after all!

He wound up helping me feel much more relaxed than I would have otherwise, starting out by slowly massaging my thighs and butt. I could have fallen asleep right there. After a few minutes passed, he made his way to my butt hole and started making slow, firm circles around it, eventually making his way to the center. The lube made everything easy. His finger slid in without too much effort, and I focused my intention on relaxing internally, but it couldn’t have been more than five minutes before I was calling it quits. I wasn’t in any pain, but it wasn’t particularly pleasurable either. My body was buzzing, but my butt began to feel quite lovely after I rested a few moments. With all the blood rushing to my butt, it actually felt like I’d given myself a nice healthy wake-up in that area.

I got back very late that night, way past my usual bedtime of 2 a.m., and was beyond exhausted. I have to play with my butt! I reminded myself, matter-of-factly. I reached into my box of sex toys and unearthed a stainless steel plug that I used to use quite frequently. It wasn’t the smallest plug I had, but it was the first one I managed to find, and I remembered loving it.

At some point, I felt myself let go of the tension I was holding in my chest and stomach. Relaxing took more than mindfulness, it was like an autonomic release within my body. The sensation felt as though there was a tight cord running from the top of my head all the way down to my butt though the center of my body, and that cord had suddenly been cut. I noticed this happening, but kept gently moving my finger as I experienced it. The whole session lasted 10, maybe 15 minutes, but afterward I felt more excited and motivated to explore my butt than ever before.

That night, my boyfriend and I had vaginal intercourse for the first time since my butt experiment began. We tend to stick to the same routine when have sex because we know that it works for both of us. This butt experiment was definitely out of my usual repertoire, and I felt like it was taking a toll on the other aspects of my sex life.

We maneuvered the toy in and out of me slowly, inching closer and closer to full insertion with every stroke. I had trouble taking the toy at it’s widest point, however, so we continued to bob the toy in and out halfway until… a random wave of orgasmic sensations washed all over my body! It didn’t feel exactly the same as my vaginal orgasms, but it definitely originated from my G-spot. The tip of the plug must have been vibrating up against my G-spot even though it had barely made it in my body. I was totally flushed and joyous, but very caught off guard by this orgasm since I can usually feel them coming ahead of time.

Despite my successful butt orgasm the night before, I was quite sick of playing with my ass. It wasn’t that I didn’t enjoy it, I just knew it wasn’t a thing my body could handle on a regular basis. Maybe this was the sort of thing I could only enjoy every once in a while when I was truly excited about it. Everything felt “meh” by day six, so I lazily got back in the bathtub and fingered my butt lazily until I’d had my fill.

I had originally told myself to not push for butt sex on the final day of my experiment, but as I lay in bed warming myself up, I easily managed to fit three fingers in at the same time. When my fingers were inside, I could wiggle the tips of all three fingers around with ease. At the opening of my anus, it felt like a tight rubber band cinching my index, middle, and ring fingers together into a bundle, but inside it was soft and fleshy, like reaching inside of a melon. “Wanna fuck my ass?” I propositioned my boyfriend. He wasn’t sure I was serious at first, but when I assured him I was for real, he reached for a condom and some lube.

I lay on my side and he lay down behind me in a spooning position. When I used to have butt sex frequently, it was always on my back, but I thought this position would give me more room to maneuver his dick in at the right angle. After slathering both him and my butt in lube, I reached behind my back and poised him for entry. And guess what? It went in easily! Most importantly, it was also pain-free. He was careful to not hurt me, and did exactly as I said so that it never became too intense.