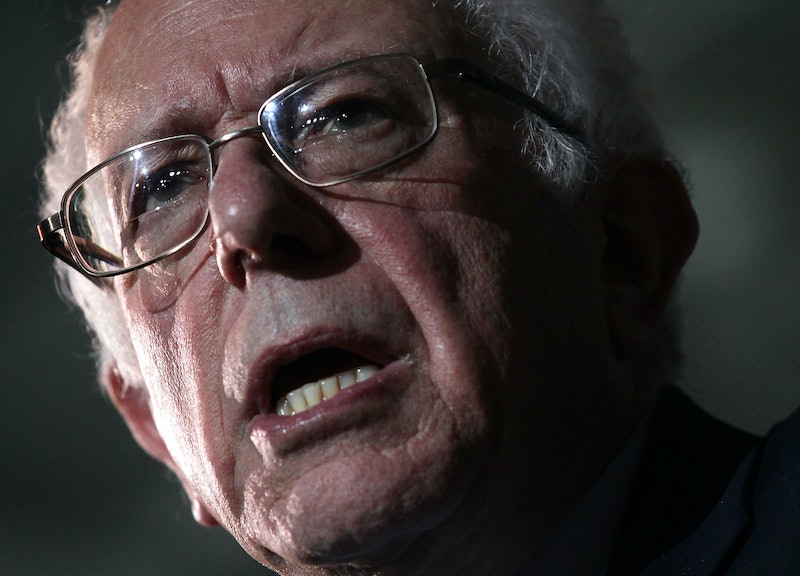 Across Iowa, as the first votes of the 2016 presidential race were slowly trickling in, it was of course far too soon to call any winners, and Bernie Sanders knew it. In a brief interview with CNN, despite Hillary Clinton showing an early lead of approximately 52 to 46 percent, Sanders reminded everyone that we've got a long race to go, and spoke highly of the campaign he's run so far. "Too early. We will find out in an hour or so, I think," he said. "But we're very proud of the campaign that we ran. We ran a positive campaign, and we will find the results out soon enough."

The last polls conducted before Iowans headed out to vote showed Hillary Clinton with a small lead over Sanders in the state, which she'd had for the last two weeks or so. And as of caucus day, the forecasters at FiveThirtyEight were giving Clinton 2:1 odds of defeating Sanders in the contest. But in the pantheon of election forecasting, those aren't overwhelming odds. It's entirely possible that Sanders could pull off an upset, which would give him an important early victory in his quest for the Democratic presidential nomination.

Of course, the Iowa caucuses aren't nearly as important as they're often made out to be. The state is but one of 50 to cast its vote for the nomination, and it isn't worth very many delegates. Furthermore, it doesn't have a great track record of predicting presidents, so it's important to keep things in perspective, given all of the attention Iowa is receiving tonight.

Furthermore, if Sanders wins in the state, he'll still have quite an uphill climb ahead of him. As a very white, generally liberal state, Iowa — along with New Hampshire, the next state to hold a primary — is unusually suited to Sanders' strengths as a candidate. He won't be able to count on that advantage for most of the Democratic primary, and he's going to have a much tougher time on Super Tuesday (March 1st), when eleven states that aren't quite as Sanders-friendly cast their votes.

That said, winning Iowa does have one very big benefit, and that's the loads of media coverage heaped upon the victor. That publicity helps a candidate stay on undecided voters' radars, and that in turn can help them raise more money to stay competitive in later contests. Expectations also matter: A strong second- or third-place showing by a candidate who wasn't expected to perform well at all can sometimes be enough to keep them in the headlines.

That's sort of the position Sanders is in. Nobody expected his candidacy to be nearly as successful as it has been so far, so even if he doesn't win in Iowa, a second-place showing is arguably a victory in its own right.