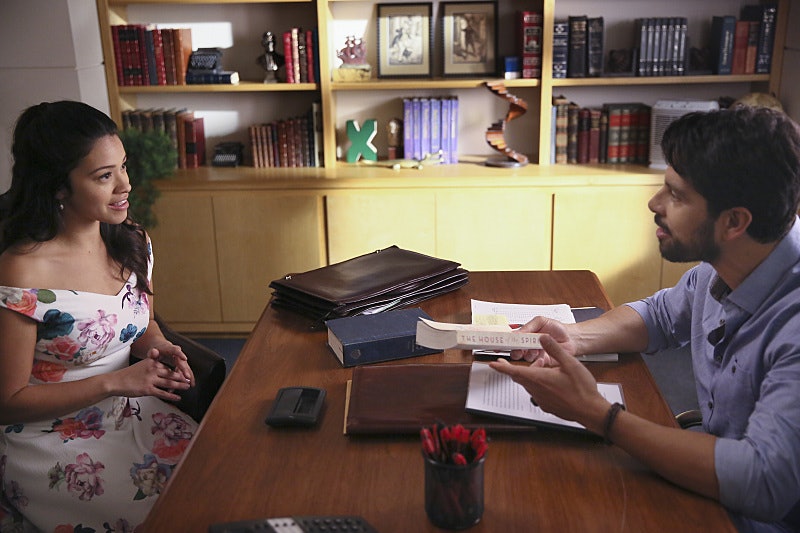 Computer problems. We've all been there. And on Monday night's episode of Jane the Virgin, Jane experienced everyone's worst nightmare: losing all of your important files after a complete computer fail. However, there one positive thing to come out of her stressful situation: Jane decided to start dating again on Jane the Virgin . And while I'm sure there's many of disappointed viewers out there, wishing it had led to a reunion with either Michael or Rafael, this should still totally be considered a good thing.

Let's not forget that our main goal is to see Jane happy and lately she's had very little time for herself now that she's both a mother and student. So it's just good to see her at least dipping her toes back into the dating pool again. Not because she needs to be with a guy in order to feel fulfilled. (We all know Jane is amazingly independent and we love her for it.) But rather because even the most fiercely badass ladies need some romance in in their lives.

Of course, it wasn't all exactly smooth sailing. (When is it ever with dating?) But it did eventually lead her to sharing a steamy kiss with her computer tech guy Dax, played by the very attractive Diego Boneta. It may not have been the meet cute that she had expected, but that didn't make it any less enjoyable to experience (or to watch)! (That is until he mentioned that he had a girlfriend. UGH!)

OK, so it wasn't exactly the happily ever after Jane had envisioned, but it helped her to realize that she's not interested in casually dating. She's a relationship person and now that she has Mateo that fact is more prominent than ever. Struggling with being a mom and having a dating life and having a career can be very difficult, but if anyone is up to the challenge it's our Jane. And even though none of these romantic attempts resulted in true love, it was certainly a step in the right direction and shows that she's ready to get back out there and find that happiness she oh-so deserves. Perhaps it'll even be with her writing professor, Jonathan. Stay tuned!