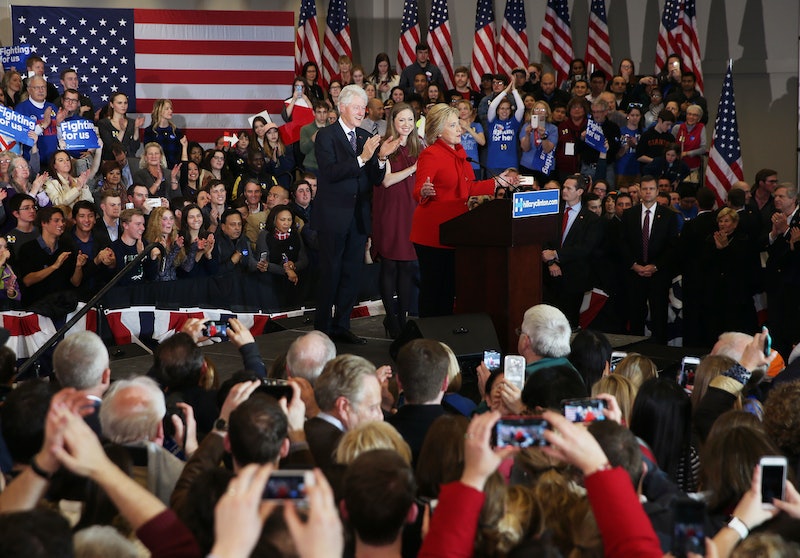 Monday night's presidential caucuses in Iowa kicked off primary season for the 2016 race. While the Iowa caucus isn't necessarily a winner-take-all race, there is one person who stood out from the rest and may have actually won it all: Sticker Cheeks Guy.

The polling continued for Democratic candidates Hillary Clinton and Bernie Sanders— who were virtually tied as precincts finished reporting their results — and Martin O'Malley ended his campaign after receiving less than 1 percent of voter support. The Republican caucuses are over, and Mike Huckabee officially suspended his presidential bid, Jim Gilmore lost to "Other," with a 0 percent support rate, and Ted Cruz and Donald Trump were neck and neck for most of the night. But in the end, Ted Cruz won this year's Republican caucuses.

During Clinton's victory speech — although she hasn't yet won the caucuses tonight — Sticker Cheeks Guy had everyone's attention, standing directly behind Clinton with two big blue stickers glued to his cheeks. As Clinton and Sanders continue polling extremely close — Clinton at 49.8 percent and Sanders at 49.6 percent — it looks like Sticker Cheeks Guy is the real winner of the 2016 Iowa Democratic Caucuses.

If you don't believe me, just look at those stickers!

But he's seriously enjoying himself:

And of course there are the conspiracy theories: