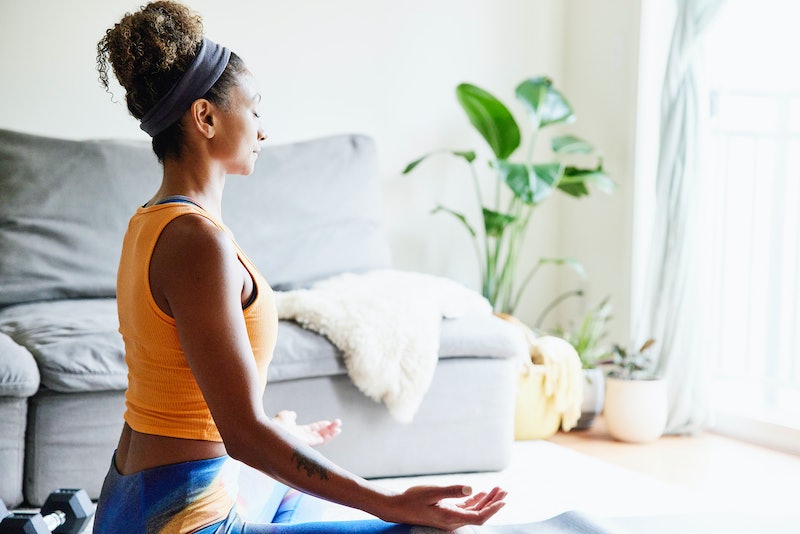 Self-control impacts your daily life in oh so many ways. When you have a handle on it, it makes life easy and breezy. But when you don't, a lack of self-control can make life pretty darn difficult.

When you think about it, self-control comes into play the minute you wake up and sticks around until the moment you fall asleep. "To snooze or not to snooze?" is the eternal question in the morning, and self-control can be what gets you out of bed on time. Self-control then follows you to work, where you need to stay focused and maybe not check your phone 100 times (even though it's so hard not to, I know). It then shows up in the evening, where you can choose to binge Netflix, or exercise some restraint and go to bed on time. See? Self-control really is an important skill to have.

And it really comes in all forms — not lighting a cigarette, making sure you get to bed on time, waking up on time, resisting the urge to stalk your ex, not spending eight hours going down a Wikipedia rabbit hole, not road raging, etc. It's about making good choices, and sticking to your guns when you have made up your mind.

If you're interested in reigning in your impulses, then check out these tips for having self-control in any situation.

We hear everyone singing the praises of meditation, and yet do any of us actually do it? (If you do, good for you!) But for those of us who can't bring ourselves to sit quietly for a few minutes, here's a little incentive — besides being incredibly relaxing, meditation can also help with impulse control. As Travis Bradberry noted in Forbes, "Meditation actually trains your brain to become a self-control machine (and it improves your emotional intelligence). Even simple techniques like mindfulness, which involves taking as little as five minutes a day to focus on nothing more than your breathing and your senses, improves your self-awareness and your brain’s ability to resist destructive impulses."

I knew napping was the best thing ever, especially now that some scientific studies have shown that spending time conked out in bed can help with self-control. According to Eric Ravenscraft on Lifehacker.com, "[New research] from UC Berkeley found that after a poor night's sleep, the parts of the brain associated with automatic behavior were extra active, while the frontal lobes which affect self-control were more inhibited. The result? A groggy person will be more likely to do whatever their instinct says right in the moment, rather than make more conscious, healthy decisions." So if you're craving something, or about to make a bad choice, stop everything and go take a nap. You'll feel more in control when you wake up.

Whenever I'm feeling particularly out of control, I make it a point to go for a walk. Not only does it make me feel better physically, but the exercise also helps me to think straight. And as it turns out, this sense of relief comes from a dose of good old-fashioned neurotransmitters. According to Bradberry, "Getting your body moving for as little as 10 minutes releases GABA, a neurotransmitter that makes your brain feel soothed and keeps you in control of your impulses. If you’re having trouble resisting the impulse to walk over to the office next door to let somebody have it, just keep on walking. You should have the impulse under control by the time you get back." Sound advice.

Have you ever been successful in forcing yourself to do something? Probably not — or at least not for very long. But it's not your fault, per se. Your pesky brain is to blame, as it doesn't like being told what to do. As Ellen Hendriksen, Ph.D., notes on QuickandDirtyTips.com, "Forcing yourself to do something aversive, like being nice to your in-laws or resisting that cigarette, depletes your store of willpower for other tasks. Yes, even though self-control can be improved, it’s fundamentally a limited resource."

Hendriksen points to a 1998 study where participants sat at a table with two plates: one filled with fresh cookies, and the other with radishes. Some were told to enjoy the cookies, while others had to eat the radishes. Then they were given a (secretly impossible) puzzle to solve. The people who had eaten the radishes and resisted the cookies gave up on the puzzle after eight minutes, while those who didn't have to resist the cookies were able to plug away at it for a full 19 minutes. "So rather than hacking your way through your self-control task with a machete, use some quick brain hacks to think about your task differently," Hendriksen says.

OK, so forcing yourself doesn't work. Now it's time for those clever brain tricks. For this, Hendriksen notes the 1972 "marshmallow study," which involved preschoolers and a marshmallow. "Each kid could have the marshmallow when she wanted, or, if she could exercise self-control and wait, she could have it and another treat in a few minutes," Hendriksen says.

To do help with resisting, researchers suggested brain tricks which included "pretending the marshmallow is just a picture," as well as encouraging the kids to think about the marshmallow in abstract ways, like "how much the marshmallow looks like puffy white clouds." The kids who thought of the treat in these ways, instead of focusing on how sweet it might taste, were able to wait twice as long. See if you can apply this abstract thinking to your temptations.

6. Keep Track Of Your Successes

When you're trying to exercise self-control, one slip up can erase all past successes in your mind. (Probably because failure has more mental weight than success, don't you think?) So, to prevent feeling like a failure, keep a running list of your triumphs. According to Roy F. Baumeister, Ph.D., and John Tierney on Today.com, "Keeping track of your progress is crucial for staying on board with any plan. It offers immediate encouragement, and on days when you falter, you can look back at your log for a mental pick-me-up, instead of writing yourself off as a lost cause." A chart showing your weight loss, or days gone without a cigarette, will come in handy when you slip up or give in. Sure, you just had a smoke, but look at all the days you went without one! Good for you.

Everyone loves presents. So if you go the whole week without hitting snooze, or you commute to work and resist the urge to road rage, congratulate your self-control with a little prezzie. As Baumeister and Tierney note, "Incentives can work wonders. Journalist Esther Dyson — a disciplined daily swimmer — likes to tell how after years of failing to floss regularly, she was finally struck by the right incentive: If she flossed her teeth, she would permit herself to swim five fewer minutes the following day. That was four years ago, and she has flossed every night since."

Let's say you want to cut back on sugar, and then you fall victim to a plate of donuts. If you do, it can be easy to say "f*ck it" and continue on living your sugary life. But if something is important to you, especially a major health-related change, don't let slip ups ruin your goals. As Bradberry notes, "A vicious cycle of failing to control oneself followed by feeling intense self-hatred and disgust is common in attempts at self-control. These emotions typically lead to overindulging in the offending behavior. When you slip up, it is critical that you forgive yourself and move on. Don’t ignore how the mistake makes you feel; just don’t wallow in it. Instead, shift your attention to what you’re going to do to improve yourself in the future."

Self-control is a powerful thing, both when you have it, and when you lose it. So always remember to reward yourself when you have success, while also giving yourself a break if you slip up.

More like this
These 4 Zodiac Signs Have Naturally Inquisitive Souls
By Nina Kahn
Wimbledon Alters All-White Kit Rule Amid Candid Period Discussions
By Catharina Cheung and Rachel Mantock
Here’s Your Daily Horoscope For November 30, 2022
By Mecca Woods
Here’s How To Find Your Spotify Wrapped
By Emma Lord and Emma Carey
Get Even More From Bustle — Sign Up For The Newsletter