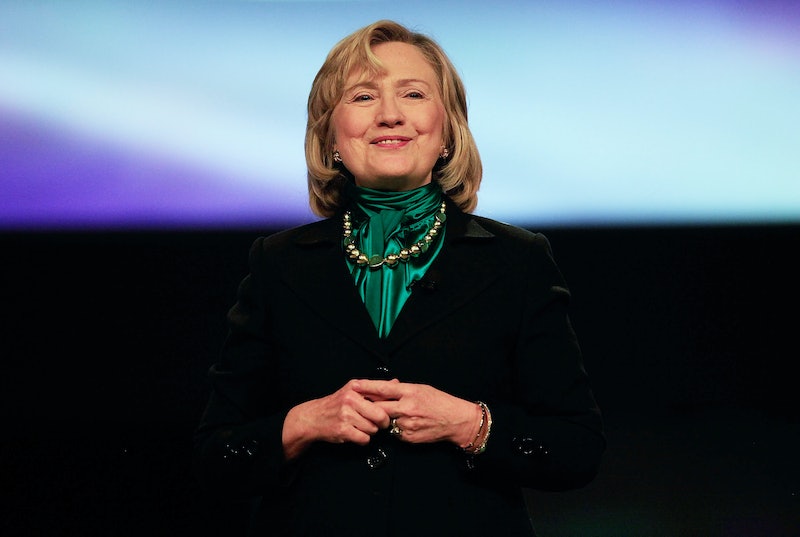 Regardless of the RNC backlash, people still want to make movies and television about Hillary Rodham Clinton. Sure, both the proposed CNN documentary and the NBC Clinton miniseries fell through. But there's still the Clinton biopic Rodham, and now, there's another Hillary Clinton-looking project on the block. CBS just ordered Madame Secretary , a drama that "explores the personal and professional life of a maverick female Secretary of State as she drives international diplomacy, wrangles office politics and balances a complex family life." Hmmm... sound familiar?

The show already has a pretty high pedigree — it's from Joan of Arcadia creator Barbara Hall and Voice of God Morgan Freeman. But the description is too vague to tell if it's really inspired by the former Secretary of State. Sure, those are all descriptions that apply to the famous former first lady, but the show could also take the Veep route and explore an entirely new character of a woman in politics. It will be an interesting show to watch either way, but here's the questions that need to be asked to determine if Hillary Clinton is indeed at the heart of this show:

Is there a relationship scandal?

Besides her political career, this is the most-remembered thing about Clinton: going through her husband's devastating sex scandal. Of course, it doesn't have to be a carbon copy of the incident, but this is part of what makes Clinton's life such rich material for a television show. It's hard enough to forgive a spouse for indiscretions, and it's even harder doing it in the ever-watchful public eye. Which brings us to...

How is she perceived in the media?

During the 2008 election, there were only two things a female politician could be: a sexy ditz or a shrew. Sarah Palin was portrayed as the former, Clinton as the latter. It seems that Clinton has had to face this problem for almost her entire political career: she's been bossy, she's been mean, she's been cold, she's been a bitch. Having a female Secretary of State have to deal with these criticism not only makes for more realistic television, it's also relevant to Clinton's own experience.

Does she have real ambition?

Clinton wasn't much of a sore loser in the 2008 election, but it was still clear from the get-go: she wanted more than to be just Secretary of State. She never seems to be someone doing their job as much as she does a woman trying to get things done. A Hillary Clinton-inspired show would have to have a character with a drive as fierce as hers.

How many pantsuits are there?

How Hillary Clinton somehow became The Face of Pantsuits Everywhere is uncertain, but it's a good thing she did. The underrated business attire combo needed a good spokesperson. Screw the blazer-skirt combo, Clinton does things in a power pantsuit. Pantsuits are to Hillary Clinton as gorgeous coats are to Olivia Pope. It's just how they get things done.

More like this
New ITV Drama Maternal Is Lifting The Lid On Life As A Woman In The NHS
By Catharina Cheung
We’ve All Had Bad Sex. Nona Willis Aronowitz Is Talking About It.
By Sophia Benoit
It’s Official: 'The Bachelorette' Is No Longer A Fairy Tale
By Samantha Allen
Why Eurovision 2023's Host City Won’t Be Revealed For A While Yet
By Sam Ramsden and Rachel Mantock
Get Even More From Bustle — Sign Up For The Newsletter