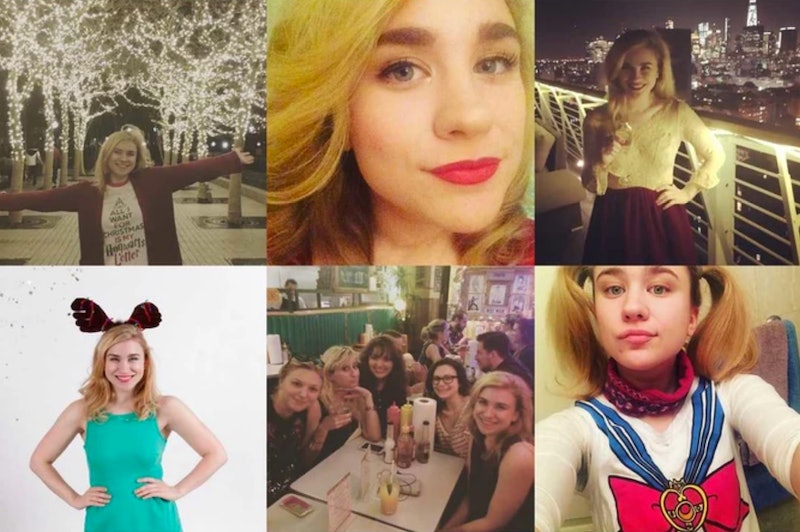 Remember those halcyon days at the end of 2015 when we were all generating our “best nine” on Instagram? It turns out that the #2015bestnine campaign was actually a marketing strategy for a new dating app, called “Nine.” With the app, launched yesterday, Instagrammers can use their nine most popular photos to create a “best nine” composite to attract possible matches — which means that, depending on the content of your Instagram feed, your potential soul mates will either be looking at a collage of carefully curated bathroom selfies or a mix of images of your food, your dog, and your feet.

In case you missed it, the #2015bestnine trend took over Instagram in the final weeks of 2015, with 15 million users participating. Instagram lovers could go to a website and enter their Instagram ID (or that of any public account), and the site would generate a collage of the user’s nine most popular images of the year. It was a fun way of capping off the year — almost like a yearbook with highlights of 2015. What Instagram users may have forgotten about was the prompt they received in the midst of making the collage, which asked them to sign up for a waiting list for what Tech Insider describes as “a then-undisclosed service based on Best Nine.” That’s where the dating app comes in.

Nine creators Yusuke Matsumara and Mai Sekiguchi claim that 130 thousand Instagram users signed up for the waiting list as part of the #2015bestnine campaign. (They told The Daily Mail that those who signed up were “‘clearly’ informed that the registration was for a new ‘match-making app for Instagrammers.’” Buzzfeed says that the specific language used was “Match with other Instagrammers using your BEST NINE!”) Those 130 thousand are Nine’s first users.

Matsumura told Tech Insider that Nine is intended to be less superficial than other dating apps, saying, “Nine is designed to make matches between people focusing more on their personality and inner beauty rather than appearance or status.” The creators believe that collages are the key to making better matches. Matsumura explained to The Daily Mail, “We soon figured out that by making photo collages using nine photos from Instagram, it would be possible to create the dating app which focused on one's inner self and personality that we'd always envisioned.” Although the collages have the ability to show more of one’s personality than a single photo, one has to wonder just how much of someone’s “inner beauty” can be conveyed by an Instagram account, which by its very nature depends on surface imagery and editing.

Nine works similarly to Tinder, in that users can see other people’s photo collages and swipe right if they like something and left if they don’t. It’s anonymous until two users swipe “yes” on each other’s images. One advantage that Nine has over Tinder and other dating apps is that, at least so far, the app has a lot of women registered. A 2015 study found that “62% of all location-based dating app users are male,” meaning that in most apps, men outnumber women two-to-one. Compare that to Nine, where 75 percent of users are women, and the majority of those are in the 18 to 24-year-old age bracket.

More like this
Hinge's New NFAQ Feature Is Demystifying Queer Dating
By Emma Carey
The Best Time To Date After A Breakup, According To Experts
By Bustle Editors
How To Use Instagram Story Highlights So Everyone Sees Your Fave Stories
By Brandi Neal and Emma Carey
13 Selfie Instagram Caption Ideas That Exude Main Character Energy
By Jessica Booth and Emma Carey
Get Even More From Bustle — Sign Up For The Newsletter