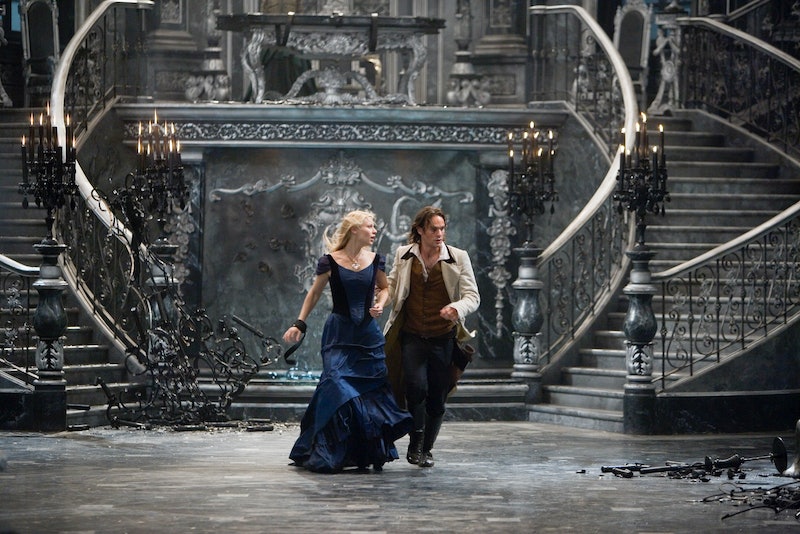 As Valentine's Day slithers closer and closer, everyone seems to have romance on the brain. Whether you're happily single, or several years into a long-term relationship, or just kind of having a sort of ill-defined thing with someone, you've probably noticed the racks of drugstore chocolates and the mounting pressure to prove to the world (or, at least, your Instagram followers) that you're romantically successful.

But Valentine's Day doesn't have to be all bad — it's the perfect excuse to revisit some of your favorite literary romances, or to buy your special someone the perfect book (and then judge their devotion based on what book they get for you). Because books are full of inspirational love stories: Gatsby, projecting all of his material desires onto Daisy. Rhett Butler, being a total jerk and insulting Scarlett all the time. An elderly vampire, stalking an underage girl. Literary romances are always perfect and never, ever dysfunctional. And the same goes for dating in books — first dates always go smoothly, just like in real life!

Well, OK, in fiction the characters rarely have to fake a text to escape from a dull Tinder date. But still, literature boasts some of the sweetest, most romantic, most upsetting, and most awkward first dates of all time:

1. Elizabeth and Darcy at the Ball From Pride and Prejudice by Jane Austen

So here's the problem with first dates in literature: They aren't really a thing. Or at least, the people on the dates rarely know that they are, in fact, having their first moments of intense eye contact with the future love of their life. That's what makes Elizabeth and Darcy's first dance together at the Netherfield Ball so adorable, even though they both still kind of detest each other. They've done nothing but snipe at each other for half a book, but all of a sudden they're dancing together! Cue the awws.

2. The Balcony Scene From Romeo and Juliet by William Shakespeare

You can't get a much more classic romance than Romeo and Juliet. They're young, they're passionate, they die — they hit all the major romantic marks. And the balcony scene is one of the most iconic scenes in literature for good reason: it's almost unbearably cute. They only met one scene ago and now, on their very first "date," they're ready to get married. Romeo makes a lot of vague, romantic pronouncements, and Juliet interrupts him all over the place asking if she should be playing hard to get or not, and it's all around the perfect teenage love scene.

3. Madam Puddifoot's Tea Shop From Harry Potter and the Order of the Phoenix by J.K. Rowling

Throwback to Valentine's Day 1996, when Harry Potter totally blew it with Cho Chang in Madam Puddifoot's Tea Shop. This deserves a best-first-date-in-literature spot because it is, without a doubt, the most awkward first date in wizarding history. After several books of build up and a very confusing first kiss, Harry and Cho finally get to sit down and have coffee. And Cho immediately starts weeping over Cedric. And then Harry ruins things further by ditching her to hang out with Hermione. Definitely the most realistic high school romance J.K. Rowling ever wrote.

4. Gatsby and Daisy's Reunion From The Great Gatsby by F. Scott Fitzgerald

Well, OK, this isn't their very first date, but it's definitely their first date in a long time. Gatsby makes Nick arrange this cutesy tea party date at his house (because what else is Nick for?), but when Daisy shows up it's almost as awkward as Harry and Cho. Gatsby even knocks over a clock, because symbolism. But then, when Nick stops third wheeling for a hot second, Gatsby and Daisy rekindle their dysfunctional romance and kick off the affair that's going to ruin everyone's lives. Cute!

5. Beatrice and Benedick After the Wedding Disaster From Much Ado About Nothing by William Shakespeare

Yes, Shakespeare again, because he wrote too many cutesy couples for his own good. Beatrice and Benedick are the opposite of Rome and Juliet in almost every way, though: they're not that young, they fling insults instead of compliments, and they live in the end. But the first moment when they confess their love to each other is just as cute: After Benedick's BFF freaks out at his wedding to Beatrice's cousin, the two snarky lovers end up coming together in the emotional aftermath. Because nothing says "romance" like a ruined wedding reception.

6. Hazel and Gus Just Hanging Out From The Fault in Our Stars by John Green

Whether you love The Fault in Our Stars or hate The Fault in Our Stars, you will cry over The Fault in Our Stars. It's inevitable. So that might be part of what makes the first date between Hazel and Augustus so sweet and memorable: they're just two normal, semi-pretentious teens, hanging in a basement, watching a dumb movie. Both totally alive. Once you've read the rest of the book, though, their first couple of dates feel so happy and unburdened by all of tragedy that comes later, and then you realize that you're hysterically sobbing alone in your room at three in the morning and you probably need to put this book down.

7. The Postponed Execution From One Thousand and One Nights

Scheherazade is one of the greatest female characters in history, but she and her husband, Shahryar, don't get much love for being a great romantic couple. Probably because he's always try to kill her. Shahryar, the king, has a habit of marrying a new woman every day, and then killing her that night, because he's the worst. But, on his wedding night with Scheherazade, she manages to postpone her execution by telling him a gripping story and ending on a cliffhanger. And she does the same thing the next night. And the next. And the next. A creepy first date, but she manages to spin it into a survival tactic, until Shahryar falls for her and stops trying to kill her so much.

8. Katniss and Peeta in an On-Air Interview From The Hunger Games by Suzanne Collins

For most of the Hunger Games books, Katniss is wholly uninterested in love stories or even her own love triangle. She's mostly interested in surviving, the continued survival of her family and friends, and... that's pretty much it. But the fake (or is it fake?) love story that she and Peeta construct to survive in the first book is a stroke of genius, starting with the on-air interview where Peeta reveals their true love. It's far from a conventional start to a romance, but it save their lives in the end (and they get to wear a lot of fun matching outfits).

9. Chilling on the Moors From Wuthering Heights by Emily Bronte

Catherine and Heathcliff's love in Wuthering Heights is one of those classic don't-try-this-at-home love stories. They're not very nice people, completely obsessed with each other, and not very good at making each other happy, but they're the kind of train wreck you can't look away from. So it's fitting that their first dates (or rather, the childhood hangouts where they fell in love) take place on the wild and windy moors. Out on the moors, Catherine and Heathcliff are free to just be two mean people in love.

10. Capturing a Fallen Star From Stardust by Neil Gaiman

Stardust is a beautiful fairy tale of a novel. And, as befits any fantasy romance, the two main lovers' first encounter involves a broken leg, literal mudslinging, and kidnapping. Tristran is a young man in search of a fallen star to give his beloved. Yvaine is a fallen star, with a broken leg and a bad attitude. When Tristran discovers that the star is, in fact, a young woman, he decides to just tie her up and give her to his would-be girlfriend anyway, because what girl doesn't want an injured woman as a present? Their first meeting is angry and uncomfortable but, as these things go, they manage to move past it in the end and go from hate to magical romance.