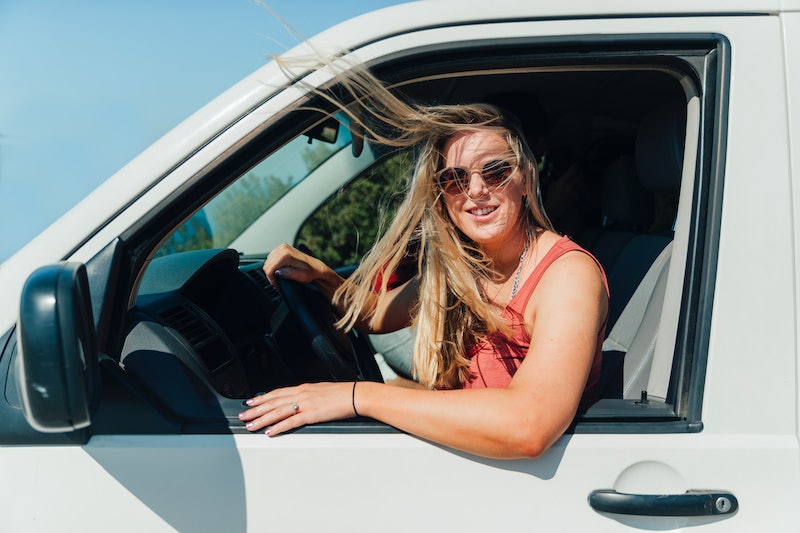 Ever since the movie Clueless, I've wanted to have my very own car. Top down, wind in my hair, people driving along side who are totally envious that I am in a tricked out red convertible. That was the dream, my friends. Two things were responsible for my dreams never coming true. One is that I lived in NYC, where having a car was as useful as a ping pong paddle with a giant hole it in. The second was that I also what the educated people sometimes refer to as money. The combination of the two delayed me getting a license until I was a senior in college.

Despite being a late bloomer in terms of my car collection, I have remedied my problems with a car of my very own. My parents were generous enough to give me their old minivan right before I moved to Los Angeles. That's right, people! If you are ever in LA and spot a minivan with NYC license plates, chances are I am behind that car's wheels. Trust me, I pull it off.

My car is big enough to fit a full-sized mattress in the trunk and I have the best time blasting rock ballads on the high way. On the other hand, having a minivan is like driving a bus. While you are seated pretty high up so that you can see everything, sometimes you are inadvertently forced into taking a lot of people places you has no intentions of going. Lesson learned: when you have a minivan, you have a lot of struggles. Here is the list of struggles that only minivan drivers will understand.

1. The Constant Confusion and Invisibility

When my friends see my car for the first time they never know it's mine. Come outside, I text them. Then I sit and watch as my friends scan the street for a single clue of where I am. I'm right here, dummy! I'm just a 23-year-old in a minivan, not Harry Potter underneath his invisibility cloak.

2. You Are Always Called Mom

You will adopt an adorable nickname such as Mom. Because what single, childless woman in her early 20s doesn't want to be called that?! I'm going to have to start carrying Capri-Sun pouches in a cooler.

People will try to pass you on the highway or swerve in front of you to park in a spot. The trick is to let them continue underestimating you. Right up until the moment you smoke-em by revving your engine up for 70 miles an hour. Take that BMW with vanity license plate spelling out BIGDADDY!

4. You Become A Professional Moving Company

When your friends decide to upgrade from a crap-hole to a nice apartment guess who they're going to call for help? Hint: it's not your friend with a Mini-Cooper or Prius.

I live in Los Angeles — arguably America's city most concerned with appearances. Combine that with pulling up to a night club in a minivan and you have a cocktail of looks and snickers. Guess what people!? My minivan is the shiz. How many of your friends can you pile in for an impromptu desert trip!?

6. Kids Will Try To Get Into Your Car

Since your car is the most recognizable and familiar car to young children, they will try to mistakenly climb inside. Just smile and tell them to get lost. OK, don't do that. But do tell them not to get inside.

Trying to drive your minivan through any type of drive thru is a testament to how much you want fast food and how much you are willing to sacrifice. Seriously. There is one Taco Bell that I have to do a three point turn in just to avoid hitting the pick-up window.

People expect your minivan to be terribly difficult to park (it's not once you get used to it, but that's besides the point). I let people continue thinking that myth is true so that I can park my car sideways across three spots and get away with it.

You want to avoid names like Bertha, The Terminator, and Bessy. Even though those names fit perfectly and are rolling off your tongue like a well practiced song verse. I still haven't named my car. Maybe I'll just go with a fan favorite — Stalin.

11. Trying Not To Be Creepy

I am constantly trying to avoid looking creepy as I pull up next to my friends and ask them to get into my car.