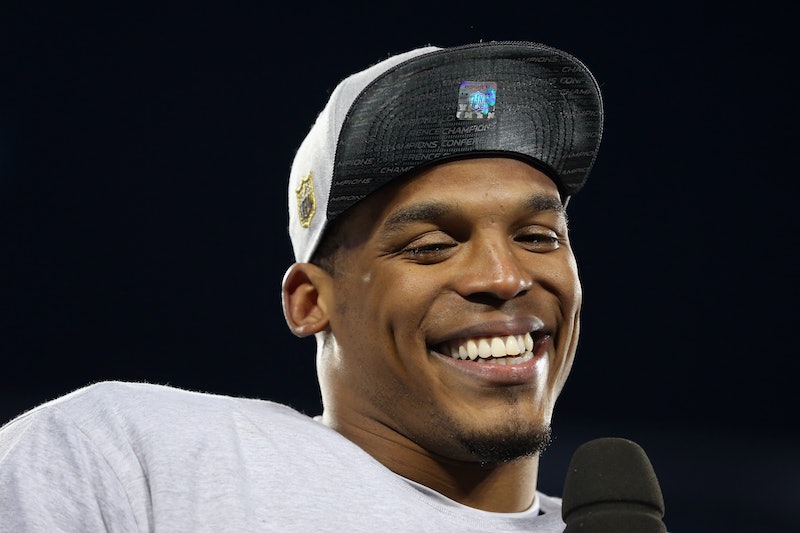 It's no secret that Cam Newton has enjoyed plenty of success in his NFL career since signing on as the Carolina Panthers quarterback in 2011. I mean, he's basically crushing it: He's the only professional player to nab the Heisman Trophy, win a national championship, and become the first overall pick in an NFL draft... all within the same year. His football talent seems to know no bounds, as he's continually breaking records and winning praise from industry experts and fellow players. And now he's leading the Panthers to the Super Bowl. Did I mention that he's only 26 years old? With that kind of pedigree, it's not surprising that he likes to keep his personal life pretty private. But the cat's out of the bag, and it's impossible to deny why fans want to know about his life off the field: Cam Newton has a super cute girlfriend and a newborn baby son.

Though he's got plenty of admirers on social media (and certainly will have more as his star continues to rise), he's managed to keep his private life as private as possible given that he's likely often followed by people snapping away photos on their iPhones. He keeps a pretty low-key social media presence, but there are some sweet tidbits about his longtime girlfriend, Kia Proctor, and their baby boy out there, and well as a few cute photos.

They've rarely been seen in public together, but I did manage to track down a few sweet snaps of the two attending the NFL Honors in 2014.

Proctor has posted a few modeling photos to her account.

Showing Off The Selfie Skills

Who doesn't love a well-placed selfie?

As you can see, there aren't a ton of photos of Newton and Proctor together. But after the Carolina Panthers take the Super Bowl, I imagine it will be tough for the couple to keep their anonymity. Is a future football golden couple about to be born? Only time will tell, but I have a good feeling about this one!

For more Super Bowl action, check out our video below!

More like this
What Is Jeanie Buss' Net Worth? The Lakers President Is Uber Rich
By Hugh McIntyre
Travis Moved To Calabasas To Live Near Kourtney — Before They Were Even Dating
By Bustle Editors
Twitter Can’t Get Enough Of The WAGatha Christie Trial
By Nola Ojomu
Fans Think Adele & Rich Paul Have Bought Their First Home Together
By Sam Ramsden
Get Even More From Bustle — Sign Up For The Newsletter