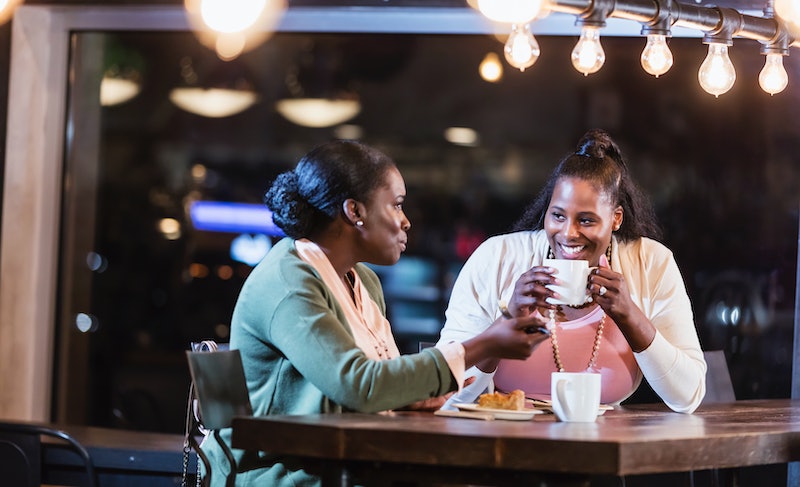 Just like romantic relationships, friendships can sometimes fall to the wayside. It can happen when people grow up, move away, or have a big fight that creates an emotional distance or grudge between two people. But in most situations, there is still always a possibility to fix a friendship if both people truly want to rekindle the relationship.

I've had my fair share of broken friendships over my lifetime. Some ended for the best, others I wish I could've rescued somehow — but there was one in particular that tore me apart. It was the type of friendship where we would talk about being in each other's bridal party and hang out almost every day; I was so grateful to have found a friend that I could be myself with. But that friend ended up being someone that hurt me the most. Instead of talking to me about the issues she had, she just disappeared from my life. I had made mistakes, but I still wish that she was honest with me instead of talking to others about our problems.

Now that I'm older, I've found my girls that I can trust and confide in without feeling judged. And even though that past friendship didn't end up the way I wanted it to, it has taught me to always rekindle the friendships you truly care about — no matter what is going on. I talked with Dr. Kim Chronister, health psychologist, about how to fix a friendship. She gave a few tips below and I hope they help you if you're going through a tough time with a friend. Because a friendship is worth saving if you feel like you guys have a bond that is worth a thousand words.

1. Talk About The Elephant In The Room

If you and your friend haven't talked to each other for a while, there's a way to break the ice without it being awkward. Dr. Chronister explains, "Tell your friend 'I know it's been awhile since we've talked' or 'I've missed you' or apologize if appropriate. Take ownership of your side even if they are not ready to take ownership of their faults yet." Be the bigger person. If you miss that friendship, then go after it. And before you jump to conclusions, sit down with your friend and have a chat about why the relationship faded. If the friendship is meant to last, it will. But if it doesn't, then at least you guys talked about it and you can have some closure instead of wondering what would have happened.

Before you can think about the future with your friend, you have to make sure the past is fully in the past. The last thing you want is for your friend to get in a fight with you because they (or you) decided not be 100 percent honest with each other from the beginning. Before you can be friends with them again, make sure you are airing out all the dirty laundry. Dr. Chronister explains, "You don't get to ask about how their life is going (especially issues around finances or relationships) until you allow them to get whatever is on their chest off of their chest. Start off with neutral topics and gradually disclose with one another." It's best if you and your friend have fully discussed the issue at hand. Any underlying emotions may still rise to the top if not disclosed properly. If you don't get everything out in the open, you are only going to keep your friendship from growing.

Just like a romantic relationship that is rekindling after a breakup, you should try and take things slow with your friendship. When you're hanging out with your friend after there has been some distance between the both of you, it's best not to get deep into conversations just yet. "After you have extended the olive branch it may take your friend a while to ease into getting back to where you started. Allow your friend to process their emotions by listening, being authentic, and giving them time," explains Dr. Chronister. Whatever you do, don't get upset with your friend because they're taking their time. Be patient with them and make sure you're respecting their wishes. They'll appreciate your mindfulness and they may even grow closer to you because of it.

4. Do Something Unexpected And Kind

Once the friendship starts to bloom, it might be a good idea to reaffirm what the friendship means to you. Dr. Chronister says, "Send texts or call once in a while if you've received a positive response from your friend. Compliment them in a card or on social media once in a while. Take the friendship at the pace that is comfortable for both of you, and at minimum, leave the friend remembering the good side of you for your own peace of mind." It will take some time, but this is when you need to solidify the relationship by just being present. Once again, you don't want to push the issue on them, but just follow the pace that is comfortable for the both of you. And sooner or later, you may feel like old friends again.

If for some reason, your relationship doesn't last, don't be bummed. People grow apart, and while it might be hard to see the big picture now, it was probably meant to be. Value what that friendship has taught you and try to learn how it made you a better friend. While every friendship might not last for the long haul, the important ones will. According to P&G Everyday, Randy Kamen, EdD, said, “When a friendship becomes more work than pleasure on an ongoing basis, it might be time to rethink whether the relationship is worth the effort.”

Having a friendship end can be just as heartbreaking as having a romantic relationship end. You might question future friends and be afraid to get close to others. But don't let that single friendship deter you from other awesome ones. If you truly value the friendship, contact them and try to mend the broken pieces. By letting time run its course, you're able take things slow and really listen to what they have to say. While talking about the issue might be uncomfortable at first, it will be worth it if you've gained a friendship at the end of the journey.