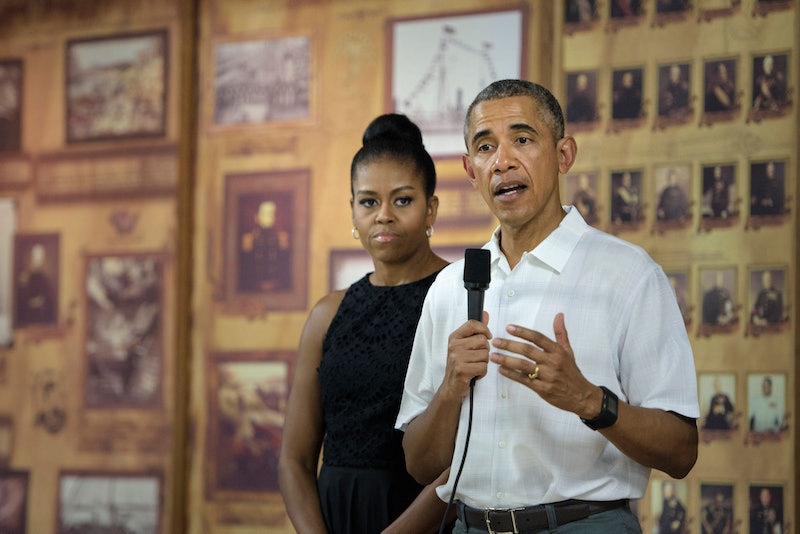 On Sunday, a staggering number of people throughout America are going to tune in to the Super Bowl, looking to catch a little championship football. And obviously, you'll also have all the usual, annual traditions available to you ― your high-production commercials, your wildly offensive commercials, your star-studded halftime show (Coldplay, really?), and of course, your pre-game presidential interview. But this time around, it'll look a little bit different, for a very cool reason: Michelle Obama will join Barack's Super Bowl interview, bringing the country's First Couple to the forefront rather than just the president.

The interview has been conducted by a bunch of different people through the years ― Savannah Guthrie and Bill O'Reilly prominently among them ― but this time, the honor will go to Gayle King, co-host of CBS This Morning. It's a rather surprising move, as far as Michelle Obama's career as First Lady goes. As Deadline Hollywood's Anthony D'Allesandro quoted, CBS News' Vice President of News and Programming Chris Licht specifically touted the uniqueness of getting a live interview with the duo:

To the best of my knowledge, this has never been done with the first couple. Mrs. Obama generally doesn’t do live (news) interviews.

Bringing Michelle into the mix for this interview is, quite frankly, great news. Both because it helps break up the tired routine of the pre-Super Bowl presidential interview ― nothing like airing a news-making interview on a Sunday morning, right? ― and because you've only got one more year of Michelle Obama in the White House. As First Ladies go, there aren't many more accomplished, inspirational, resilient, and downright fun than her.

And she's a barrier-breaker in her own right, just like her husband. When Barack won the White House in 2008, he secured a place in history as the first black president in American history, but so, too, is Michelle the first black woman to hold the role of First Lady. It might sound small if you're looking at it from a place of privilege, whether of the male or white varieties, or both ― rarely having to wonder, in other words, if you'll ever see somebody like you represented at the heights of American life ― but having a black woman standing alongside the president of the United States, as a partner and an equal, is a hugely meaningful thing.

While it'd be wrong to speculate that the interview will be less political just because Michelle is involved ― she's no less informed or staunch on the issues, and I'd be willing to bet she could be a dynamic politician in her own right if she ever wanted to ― it would be nice on a personal level to get a good long look at these two as the Obama administration draws to a close. Whatever your disagreements on politics, and there are certainly plenty of gripes to be had with any president, it's hard to argue that these are the most charismatic, personally enjoyable people we've had in the Oval Office in quite some time.

More like this
The Spice Girls & Adele Lead Girl Power Celebrations For Lionesses’ Euros Win
By Sophie McEvoy
The Lionesses Are Calling For Equal Access To Football In Schools
By Sophie McEvoy
The 12 Best US Open Tennis Outfits Of All Time
By Avery Matera and Dominique Norman
Serena Williams Is Retiring From Tennis: “I'm Ready For What's Next”
By Marina Watts and Grace Wehniainen
Get Even More From Bustle — Sign Up For The Newsletter