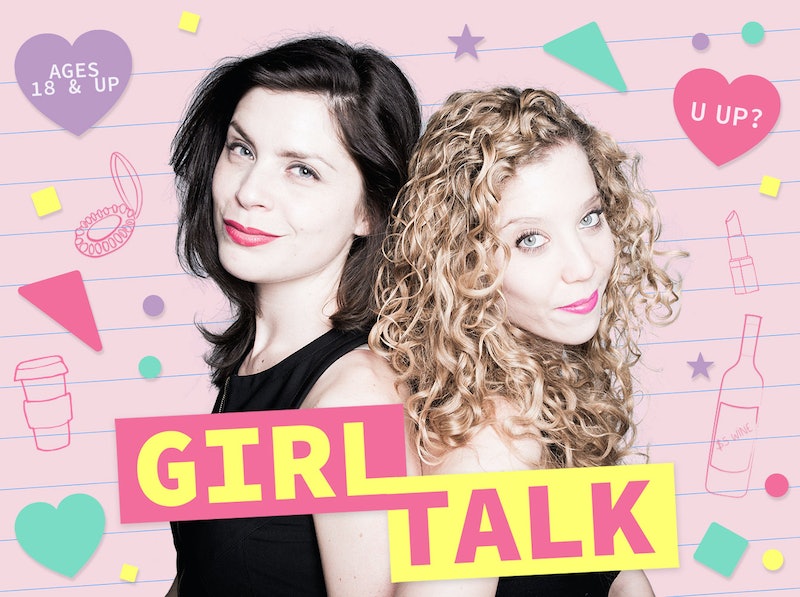 Welcome to Girl Talk, a new series where Bustle features funny females you should know about. We’ll subject them to a round of the ‘80s throwback game "Girl Talk" (you know you remember it) and talk about their upcoming projects — and we'll promise to never ask the question “What’s it like to be a woman in comedy?"

For the first edition of Girl Talk, we chatted with Alli Goldberg and Jen Jamula, the brains behind Internet satire sketch show Blogologues. (Side-note, they’re also hosting One Night Stand, Bustle’s first comedy show, on Feb. 11 in New York City, and they appeared on our sex and relationships podcast, I Want It That Way.)

Blogologues performs the best and worst of the web, marrying Jamula and Goldberg’s classical theater training (both were Theater Studies majors from Yale) with the dark humor of the Internet. These hilarious ladies are longtime connoisseurs of the fringe web's most cringe-inducing yet charmingly intriguing corners, from Mpregger cartoons to Brony forums. Their show celebrates its fifth anniversary in 2016, meaning they were performing the web long before celebrities read mean tweets on Jimmy Kimmel.

What inspired you to start the Blogologues show?

Jen: Disillusioned with creative roles available to women in traditional live theater, we started a vlog called Why Are You On My Train, where we interviewed people on the NYC subway about the quirks of their lives and what it meant for us all to be trapped together and typically not connecting. The New York Times found and wrote about our little blog, so we knew we were onto something.

One night, Alli started reading Colin Nissan’s viral McSweeney’s blog post, It’s Decorative Gourd Season, Motherfuckers, out loud while we were editing our train blog, and she suddenly exclaimed “This is a monologue!” Jokingly, I said, “You mean a blogologue?” We decided that night that we wanted to perform blog posts on stage and booked a tiny, downtown theater.

Who are some of your comedic influences?

Jen: Betty White is my boo, she just doesn’t know it yet. Kaitlin Olson is a constant inspiration in the groundedness of her absurdity. Lucille Ball is truly one of the best ever, embodying equal parts grace and goofiness, and being a completely baller studio exec to boot.

Alli: Jen, I thought I was your boo

What has your favorite Blogologues bit been so far?

Jen: There are so damn many. Last year, I played Bjork at her MoMA restrospective, reading an Amazon review about a glass dildo and pretending it was the most beautifully obscure art. I also love a query called Is It Normal To Burn Cockroaches, which we made into a sketch where I played a dapper, Anthony-Hopkins-inspired serial killer. I love playing men onstage, especially. One of the best post-show moments I ever had was when a male friend said, “I find you attractive as a woman, and I get really conflicted when you play men.” I love the grey areas we’re dredging up.

Alli: I love playing creepy, fucked up children. Is that weird? And I think we both love gender-bending and the general ability to play a dolphin in one scene, a teletubby in the next, and a man who likes jerking off into tornadoes 30 seconds after that. (All real sketches, yes thx.)

Jen: We have a sketch called Dolphin Sex: A Fantasy, which is one man’s fanfic about how he was a security guard at a local aquarium and one night bit the bullet and had sex with the dolphins. We made it into a film-noir-meets-Under-The-Sea, consensual love story. Alli played a spastic and incredible dolphin; I played the man.

Alli: OMG, there are way too many. The Internet has completely desensitized me. A personal favorite is when Severus Snape is really drained from teaching, so Dumbledore sends him on sabbatical — to the land of the teletubbies, naturally, where he then fucks Laa-laa, obvi.

Tell us about your new web series, 2 Girls 1 Show. Where can we watch it?

Alli: 2 Girls 1 Show is the fake story behind Blogologues. In each episode, we discover something wild on the Internet, then we interview a REAL person — either someone from that online community or the actual writer of the post. Naturally, shenanigans ensue after our research.

This week you chatted about everything from semen mixology to mpreggers on Bustle's sex podcast, I Want It That Way. Anything else we should be looking forward to?

Jen: Mpreggers and semenologists aren’t enough for you?! In 2 Girls 1 Show, we also cover sugar babies, bronies, and what Tinder dating tactics would look like in real life. In the stage show, Blogologues, we cover errrything. We spend a lot of time on the Internet, and at this point people send us content they find.

Speaking of, what are your favorite Internet rabbit holes to fall down?

Jen: I once googled “fuck you teddy ruxpin” and found an epic rap battle between Teddy Ruxpin and Ted the bear. Winnie the Pooh enters in flames at the end and decapitates them. We obviously performed this. I think we’re both fascinated and disheartened to read about a growing trend of “technosexuals” and sex robots. I also love going on Is It Normal? , turning off the safety settings, and see what people are feeling inquisitive about.

Alli: Agreed. And then there’s always the TIFU (Today I Fucked Up) sub on Reddit.

Have you ever found anything too outrageous to perform?

Alli: Well, some fan fiction writer out there decided that the Jurassic Park scene in which the children hide from raptors in the kitchen just wasn't sexy enough so they added in some raptor-on-raptor action. We respect the art, but we ultimately decided that this should stay confined to the Internet.

Anything else in the works our readers should know about?