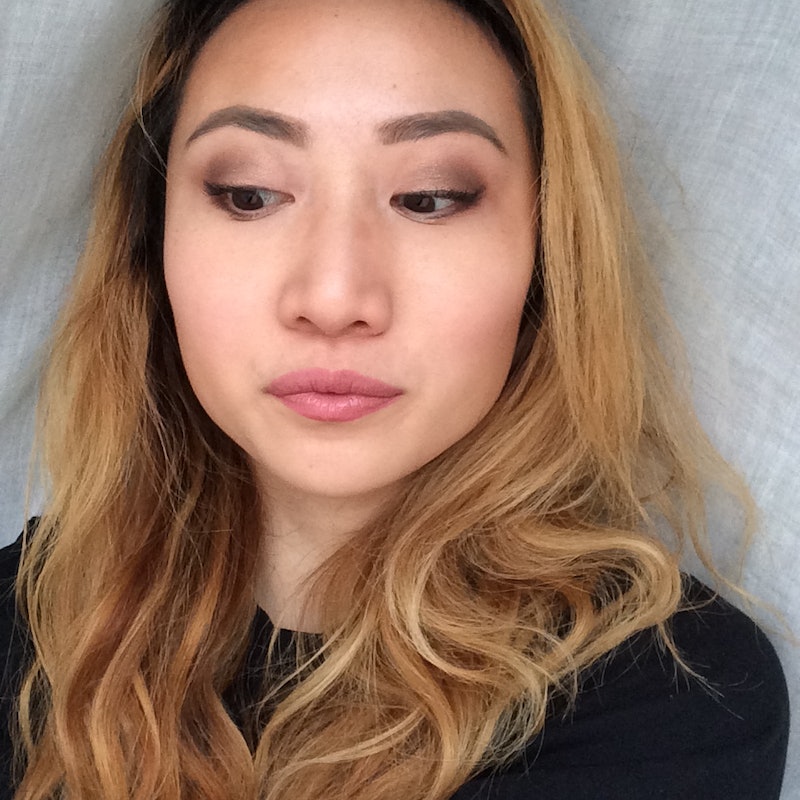 Considering that my day-to-day look is pretty simple, wearing makeup every day certainly isn't my norm. Filled-in eyebrows, mascara, light foundation, and a bit of bronzer are the main things I'll usually sport; and maybe eyeliner, if I have time. I like to let my skin breathe and, well, I would rather have five more minutes to sleep in than an extra five minutes to put on a face.

When I was younger, I used to put on a full face daily, absolutely smitten with beauty tutorials on YouTube that helped me achieve it. But as I got older, I just didn't want to be rocking a heavy look all the time. Eyeshadow, eyeliner on the top and bottom lashes, and a full-coverage foundation no longer spoke to me.

I decided to try my hand at wearing a full face of makeup every day for a week for the first time in years to gauge just how much things have changed. It was quite a different experience from that of adolescent me. I did have to wake up a bit earlier than usual to plan out what looks I would be sporting. But I remained curiously content, thinking about what reactions I'd get. Would I get any strange looks for wearing makeup at an "inappropriate" time? Or be known as "that girl" who wore heavy eye makeup on the train just for her daytime commute? But my main question was, will people actually say anything if you wear heavier makeup or keep it to themselves? With those inquiries in mind, I began.

I decided to ease my way into wearing a full face of makeup, so I opted for a version of my night-out look. Easy, neutral tones that were still a far cry from what I would wear day to day. I put out a Snapchat of my picture and got to work, where I'd hear quite the surprising reaction.

"Wow, you look like you're glowing! You look alive today," was a comment I received from a colleague almost immediately. Now, this may have been due to my being sick last week, but never once have I heard that I am "glowing" from another human being.

A few of the other reactions I received were from people commenting on Snapchat, who told me how nice the makeup was, or how pretty I was — all said in CAPS for extra seriousness. I usually don't hear such enthused reactions regarding my appearance for my day-to-day look, so day one was already proving to be pretty interesting.

For day two, I thought I'd really turn up the heat and sport a dark blue smoky eye for brunch with a friend. This is the heaviest eye makeup I'd worn in a while, so I'll admit that I felt a bit funny walking into the restaurant. As I chatted with my girlfriend and waited for a look or a reaction, nothing came.

Again, I Snapchatted the look to my friends and received messages like, "You're so pretty!" Then I was told that what I was doing was a result of a "quarter life crisis," and that I was taking it out on my makeup. I don't post heavy makeup selfies that often, so my friend thought that in the days leading up to my birthday, I must be dealing with my impending aging by going cosmetic-heavy. So far, this was my most interesting comment.

Day three coincidentally fell on my birthday, so I took my makeup up a few notches. With dark eyes and dark crimson black lips, I started my B-day off with a Snapchat selfie to see if I would get any teasing for such a heavy look. It wasn't my favorite beauty look, but I figured it would garner some major reactions.

I was wrong. Again, I received a message that said I was just "so darn pretty" and that my makeup was on-point. But from my interactions IRL, I received nothing more than extra blank stares and possibly perplexed looks from passersby.

On day four, I wanted to glam things up a bit. With a bit of gold and bronze eyeshadow, complete with crimson lips, I set out to see if this look would get any reactions. This time, the comments were a bit more detailed. Some friends mentioned that I should consider being a model (mostly my guy friends) while the women in my life offered compliments on my lipstick color and bronzey eyes. Interestingly enough, I didn't receive any comments or visible reactions at work.

Wanting to see if a brighter lip with more neutral eyes would yield a different reaction, I set out for another day to work. After sending out Snapchats and coming into contact with colleagues and friends, I was complimented for my lip color.

I found that my lady friends absolutely loved the color, and a male friend even told me that he prefers women with bright lips. Personally, I love dark lipstick. It can help create something of a vampy look and I'm all for it.

On day six, I was admittedly pretty exhausted from celebrating my birthday the night before, so I could only muster up foundation, eyebrows, and a bright lip to draw attention away from how awful I felt. This look was the most similar to my everyday look, but I usually don't wear super bright lipstick, especially not when I don't feel 100 percent.

I had to get myself together in order to go for a family dim sum in the morning, which I felt would yield some interesting reactions. But the only comment I received was from my mom. She asked if I was going out. But really, all I wanted to do was curl back into bed and rest.

I wanted to end this experiment with look that I've never done before — stepping completely out of my comfort zone. While the rest of my face was toned down, I applied blue eyeliner on just to see if this would be the icing on top of this interesting experiment cake.

To really muster up some reactions, I purposely put a "is this a yay or nay" caption on my Snapchat. This look received a lot of mixed reactions. Upon first look, a colleague actually asked if this was a writing-related experiment. I responded with a smile.

A few girlfriends told me that the look was very bright and didn't look bad at all. The friend who always commented on how pretty I was throughout this entire experiment actually didn't give much feedback, other than that the blue eyeliner was a definite "nay." On the flip side, another male friend loved the look.

So What Did Wearing Heavier Makeup Prove?

Going through seven days with a full face was kind of fascinating, and left me with mixed feelings. On the one hand, I actually felt extra confident and attractive with the heavier makeup on. It's not that I'm preaching that all women should put on a full face everyday, but I must admit that I felt like a totally revved-up version of myself. But on the other hand, I realized that most of the comments regarding my looks came from guys.

I usually don't hear how great I look from male friends, but this experiment showed that they were the ones who gave out the most interesting comments, while my female friends tended to comment on one particular feature or not say anything at all.

So what does this say about how men and women interact with makeup? Women (at least the ones I interact with) are seemingly more mindful of the makeup application itself, like the way you do your eyeshadow or the particular color of a lipstick. Maybe they generally have more appreciation for the art of makeup than the aesthetic itself. While putting in a bit of extra effort into my look was certainly a confidence booster of sorts, I was conflicted about how upfront some of the guys in my life were. It wasn't that I was surprised that certain men were drawn to heavier makeup per se (considering social constructs seem to suggest that women should wear a bunch of makeup), but rather, that their forthcomingness about it was unexpected. And as for the person who told me I was going through a quarter life crisis, well, it's kind of a sad state of affairs that women can't exercise any kind of agency over their look without it being critically dissected. Although I'm willing to bet this friend was just trying to be funny.

But what I really realized throughout this all is that women don't often compliment each other enough. Not just on appearances or makeup, but in general. I know that's something I'll be aiming to do more of.