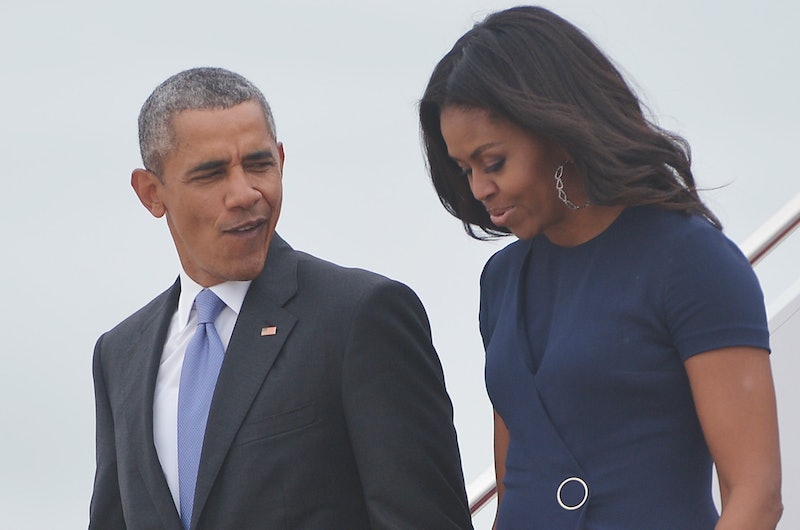 Whether you'll be watching for the game or the commercials, Super Bowl 50 is sure to be a treat. Americans sure like tradition, and I bet you're looking forward to your annual celebration of friends, food, and football. But while you're prepping for the big event Sunday afternoon, you might want to tune into CBS a few hours early for a little-known tradition you might enjoy. Each year, President Obama is interviewed before the game on a range of topics spanning from politics to game predictions, so what time is Obama's Super Bowl interview this year?

This year will be special because not only will it be his last, but it will also be the first one in which First Lady Michelle Obama will join him. The couple will be interviewed by CBS This Morning co-host Gayle King, and the interview is expected to focus on their lives more than politics. Be ready to tune in at 2 p.m. ET, when the pregame show begins, but the interview likely won't take place until around 4 p.m.

Considering the fact that the Super Bowl is celebrating its golden birthday, CBS is packing nostalgia into its four-hour pregame show. One of the highlights will be a special titled Buffalo Back To The Future, which will pair technology with eyewitness accounts to determine what would have happened if the Buffalo Bills hadn't have missed the infamous field goal that turned into four consecutive Super Bowl losses. For diehard football fans, this is sure to be a fun ride into the hypothetical.

Another program set to air during the pregame show is a feature on the six living play-by-play announcers who have called a Super Bowl. The announcers, including Jim Nantz who will call Super Bowl 50, will discuss their different experiences with the high-pressure job. Considering the fact that only two of the six announcers are current CBS employees, it's nice that the network extended a hand to the competition in order to celebrate a crucial element of the Super Bowl.

The pregame show will also spotlight Pete Rozelle, who is credited as shaping the NFL into one of America's most beloved organizations. Rozelle got his start as the Sports Information Director at the University of San Francisco, so there's a perfect local tie-in. Afterward, the show will recreate what is considered one of the most memorable touchdown catches in NFL history between Joe Montana and Dwight Clark in 1981.

There will undoubtedly be emotional segments within the four-hour time block, including the story of a high school football star who was killed saving three girls from gunfire, but overall I think the program will be uplifting. After all, it's a celebration of football in American culture, and whether you're a football fanatic, an Obama fan, a history buff, or just interested in some good stories, there will be something for everyone in this year's pregame show.