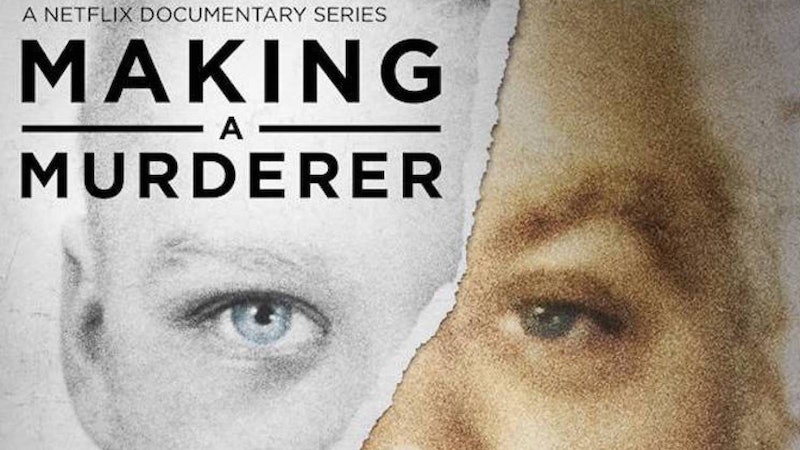 The Netflix docu-series that's sweeping the nation is making its way up to the cultural heights previously enjoyed by the likes of podcasts like Serial. The public can't seem to get enough of these true crime documentaries that give us a whole new look at cases previously thought solved, and of drawing their own conclusions based on the evidence that they are given. However, unfortunately for fans, Making a Murderer only has 10 episodes, which pass by all too soon and leave you with nothing to watch. What true crime documentaries will Making a Murderer fans enjoy?

Center on Wrongful Convictions of Youth (CWCY) co-founder Steven Drizin, more recognizable to Making a Murderer fans as one of Brendan Dassey's post-conviction attorneys, used his expertise to give fans some recommendations that are worth checking out right now. "Making a Murderer is not our first documentary dance," Drizin told Bustle. "Laura [Nirider] and I can be seen in West of Memphis, I appear in David & Me, and I was a consultant on the Central Park Five film — all films that showcase false confessions by kids that resulted from interrogations that were disturbingly similar to Brendan Dassey’s. Several of our cases have also been featured on shows like 60 Minutes, Dateline, 20- 20, and other prime-time investigative reporting shows."

These three documentaries were hand-picked by Drizin, who was involved in the production and can speak confidently about their quality in entertainment and information. Check them out below.

West of Memphis is a documentary that was written by Billy McMillen and Amy Berg, the latter of whom also directs. According to the official site, the film "tells the untold story behind an extraordinary and desperate fight to bring the truth to light: a fight to stop the State of Arkansas from killing an innocent man." The "innocent man" in question is Damien Echols, one of three then-teenagers who were convicted and imprisoned for the 1993 murders of 8-year-olds Christopher Byers, Steven Branch, and Michael Moore.

As Berg herself states, "I spent over two years chasing down every lead, every person willing to talk to us, pulling at the tangled threads of the truth to see where it might lead. This film is the end result of that journey." The documentary is not currently available on Netflix, but it can be rented from Amazon for $3.99.

The Central Park Five, directed by Ken Burns, Sarah Burns, and David McMahon, follows the infamous 1989 case in which a woman jogging in Central Park, Trisha Meili, was violently assaulted, raped, and sodomized, an attack which put her in a 12-day-long coma. The documentary specifically focuses on "the story of the five black and Latino teenagers from Harlem who were wrongly convicted," according to the official site.

David & Me, written and directed by Ray Klonsky and Marc Lamy, is a documentary of an entirely different kind. Ray Klonsky is one of the characters in it and the documentary is a deeply personal one, as it came about as a result of Klonsky writing letters to a prison inmate named David McCallum as a "troubled teen." Eventually, Klonsky decided to work toward getting his friend free of his conviction for the 1985 kidnapping and murder of a young man named Nathan Blenner.

McCallum himself is quoted on the official site as saying, "I've thought about it, and I could not see myself standing in front of anyone and admitting guilt in this crime, and if it takes me dying in prison, I will do that. I'd rather die in prison. And that's the truth." Luckily, it never got to that point. David & Me is not available on Netflix, but you can follow the film on social media for news of a screening near you.

And for those who still need more Making a Murderer, be sure to follow the Making A Murderer stream in the Bustle app Thursday at 8 p.m. EST for a chat with Brendan Dassey's lawyers at the CWCY.