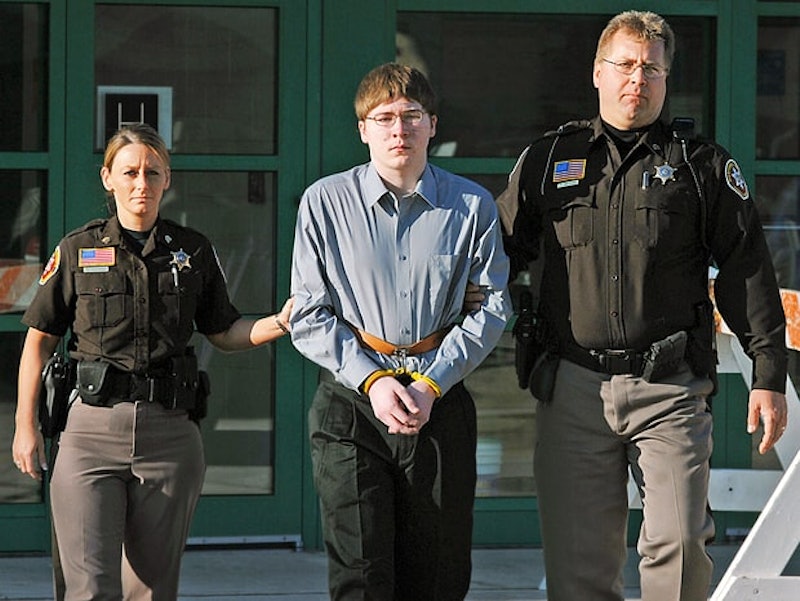 Netflix's new series, Making a Murderer , is all anyone's talking about. The 10-part documentary from filmmakers Laura Ricciardi and Moira Demos has many viewers convinced that a Wisconsin man named Steven Avery and his nephew, Brendan Dassey, were wrongfully convicted of the murder of a 25-year-old woman named Teresa Halbach. If that's the case, then the two men would have spent nearly a decade imprisoned for a crime they did not commit.

Even many of those who aren't certain of Avery's innocence believe that Manitowoc and Calumet Counties railroaded his teenage nephew in order to procure a false confession. Making a Murderer shows Dassey, who has a learning disability, being interviewed with no parent or legal counsel present, even after he received court-appointed representation.

Steven Drizin, the co-founder of the Center on Wrongful Convictions of Youth (CWCY), took an interest in Dassey's case from the beginning. The teen's interrogations were some of the first to be videotaped in Wisconsin, and Drizin was "involved in the litigation that led the Supreme Court to require videotaping," as he notes in Making a Murderer episode 10. He also claims that "[t]he jury did not hear a lot of evidence which would've explained to them why Brendan confessed to a crime that he did not commit."

Joining Drizin on Dassey's new defense team is CWCY lawyer Laura Nirider, who also appears in Making a Murderer's last episode. Both attorneys have extensive experience working with false confession cases. Speaking with Forbes about Dassey's confession and conviction, Nirider says that the teen's original defense never explained to the jury how his disability and the interrogators' methods could have led him to make a false confession. She goes on to say:

One of the things I do, in addition to representing people like Brendan, I study false confessions. False confessions by kids. And I study the way in which police question kids.

After seeing my book recommendations for Making a Murderer fans, Drizin contacted me with his own list, which I've pared down for you here. All of Drizin's recommendations center on false confessions and testimony, particularly those given by teens and individuals with intellectual disabilities. If Brendan Dassey's conviction horrified you, these are the books his lawyer wants you to read.

A false confession by 18-year-old Peter Reilly landed him in prison for the 1973 murder of his own mother. Guilty Until Proven Innocent details the interrogation techniques used to extract Reilly's confession, and the young man's journey toward exoneration.

2. The Central Park Five: A Chronicle of a City Wilding by Sarah Burns

In 1989, five black and Latino New York teens were tried as adults for the rape and murder of a woman in Central Park. Convicted thanks to false confessions, the young men were only freed after DNA evidence linked a serial rapist to the crime.

3. Police Interrogation and American Justice by Richard A. Leo

In the U.S., suspects are often treated as though they're guilty until proven innocent rather than the other way around. You have rights under the law. But what happens between "you have the right to remain silent" and "we, the jury, find the defendant"? In Police Interrogation and American Justice, author Richard A. Leo examines criminal interrogation tactics and raises disturbing questions in the process.

4. A Criminal Injustice: A True Crime, a False Confession, and the Fight to Free Marty Tankleff by Richard Firstman and Jay Salpeter

When 17-year-old Marty Tankleff discovered his parents' murder, he knew who had killed them: his father's former business partner. Despite Tankleff's lead, police instead focused on the teen himself as their suspect No. 1, and eventually procured a false confession from him.

5. Bloody Lies: A CSI Scandal in the Heartland by John Ferak

When his aunt and uncle are murdered, Matthew Livers — a man with a developmental disability — is framed with planted evidence and a false confession.

6. Kids, Cops, and Confessions: Inside the Interrogation Room by Barry C. Feld

7. The Wrong Guys: Murder, False Confessions, and the Norfolk Four by Tom Wells and Richard A. Leo

False confessions, given separately, led to the wrongful murder convictions of the Norfolk Four. Although the real killer has been found, only one of the four innocent men is free today.

8. Fall Guys: False Confessions and the Politics of Murder by Jim Fisher

In 1950s Pennsylvania, two boys, ages 10 and 13, are coerced into giving false confessions to the unrelated murders of two women. Years later, Jim Fisher noticed the inconsistencies and began his own investigation, one that would clear the names of both men.

Drizin wrote the afterword to David L. Strauss' Barbarous Souls, which examines the case of Darrel Parker, who was privately interrogated and wrongfully convicted for the 1955 murder of his wife.

10. The Count and the Confession: A True Murder Mystery by John Taylor

When a womanizing conman is found dead, police don't have to go far to find suspects. But the woman who wound up charged with his murder was an unlikely suspect: his loyal lover of 12 years who had never run afoul of the law.

11. Waiting to be Heard: A Memoir by Amanda Knox

In 2007, Amanda Knox was studying abroad when her roommate, Meredith Kercher, was found dead in their Italian apartment. Manipulated by police and slandered in the media, Knox would spend the next four years in prison, wrongfully convicted of murder.

12. An Expendable Man: The Near-Execution of Earl Washington, Jr. by Margaret Edds

Earl Washington, Jr. was mere days away from his execution when his death sentence was commuted to life in prison. His wrongful murder conviction was later overturned by DNA evidence. In An Expendable Man, author Margaret Edds examines how police coerced Washington, who has an intellectual disability, into giving a false confession.

13. The Savage City: Race, Murder, and a Generation on the Edge by T.J. English

Set in New York City in the 1960s and '70s, The Savage City examines the social and political climate that allowed the NYPD to coerce George Whitmore — a black teen with a visual impairment — into confessing to the murder of two young white women.

14. Innocent Until Interrogated: The True Story of the Buddhist Temple Massacre and the Tucson Four by Gary L. Stuart

After nine members of a Buddhist temple were found executed, five innocent suspects confessed to the crime. One was eventually able to provide an alibi, but the others remained in custody until physical evidence exonerated them.

Interrogators from Chicago, Northern Ireland, and the West Bank make up the interviewees in John Conroy's Unspeakable Acts, Ordinary People: an examination of the methods and rationalizations that keep torture practices in use today.

16. The Dreams of Ada by Robert Mayer

When the small town of Ada is rocked by the disappearance of a young newlywed, investigators scramble to find a suspect. With no body and no evidence, the police coerce two poor and uneducated men into confessing to the crime.

17. The Twelfth Victim: The Innocence of Caril Fugate in the Starkweather Murder Rampage by Linda M. Battisti and John Stevens Berry

In 1958, 14-year-old Caril Fugate found herself charged as an accessory to the string of murders committed by her 19-year-old boyfriend, Charles Starkweather. Grilled by prosecutors into giving false statements, and testified against by her murderous lover, Fugate would remain in prison until her parole in 1976.

More like this
Police Never Found Enough Evidence To Charge Sharon Marshall’s Killer
By Brad Witter
16 Novels That Paint A Realistic Portrait Of Abortion
By K.W. Colyard
Aesop's Queer Library Is Open
By Tomi Otekunrin
Your Ultimate Big Brother Season 24 Viewing Guide
By Kadin Burnett
Get Even More From Bustle — Sign Up For The Newsletter