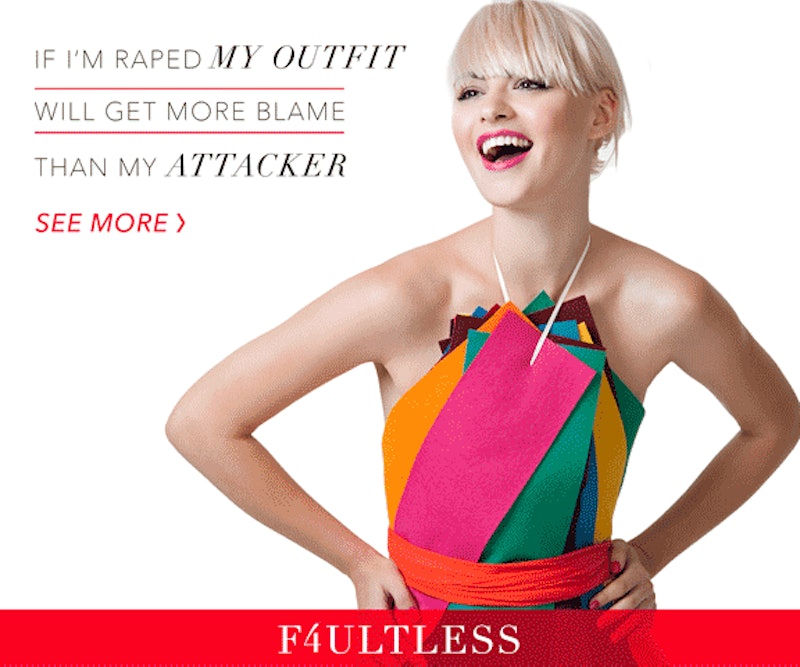 Rape culture is all around us: TV shows, political debates, and even seemingly normal conversations. In fact, it's so omnipresent that most of us have trained ourselves to ignore the signs of rape culture in everyday life — but as MTV's Invisible Ads campaign brilliantly points out, sticking our heads in the sand merely perpetuates a cycle of sexual violence. After all, rape culture thrives on silence, which allows perpetrators to walk free even in the face of overwhelming evidence of their assault; at the same time, however, the survivor is scrutinized for every detail leading up to the attack.

What were you wearing? Were you drunk? How many other people have you slept with? In the face of such invasive questions, which place the onus of the assault on the survivor, it's no wonder that many choose not to report their rape — and so the cycle of silence continues. Like many campaigns to raise awareness of sexual assault, the Invisible Ads campaign focuses on the disturbing ubiquity of victim-blaming. However, it also emphasizes an aspect that often goes without discussion: Our own complicity in rape culture, every time we let it slide.

"Ignoring rape culture the way we ignore ads doesn't make it go away," Invisible Ads explains on its website. In that vein, the campaign uses ads themselves to illustrate how easily rape culture can be disguised.

Part of MTV's Look Different campaign, Invisible Ads was designed to mimic current trends in advertising; indeed, MTV enlisted the help of Austin-based ad agency Preacher to bring the ads to life. However, each image contains a message about how quickly society dismisses sexual assault. Did your eyes automatically slide over the ad above? If so, that's exactly the point that the campaign has set out to make: Rape culture can hide anywhere, from advertising to social media, but that doesn't negate its effects. Unless we start to openly discuss sexual assault and victim-blaming, it's not going anywhere.

Fortunately, there's hope for the future. According to Look Different's research, 65 percent of young people believe that rape culture is an issue that should be addressed immediately. The campaign itself provides suggestions to fight rape culture on its website — although we've all taken a step forward just by discussing it today. Head over to the Invisible Ads website for more information.