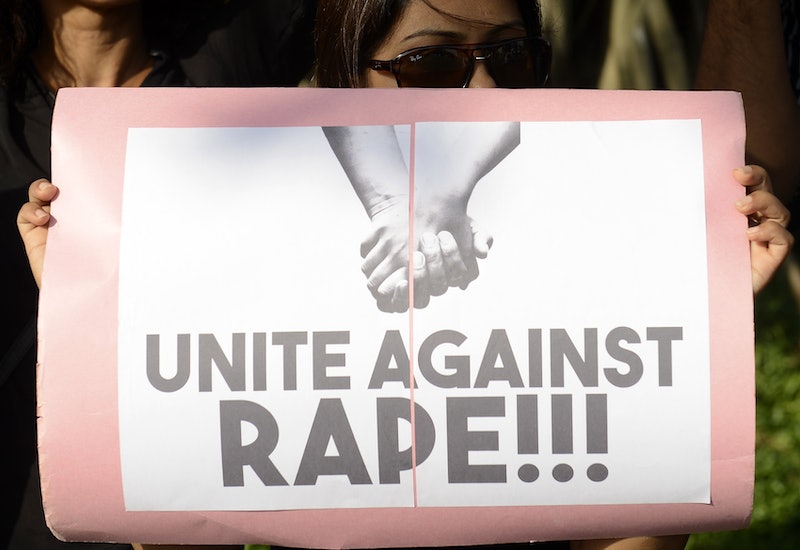 We hear the term "rape culture" a lot, but what is rape culture? I was in college the first time I heard the words used. A classmate dropped it into a conversation our discussion group was having, and I remember having two almost immediate reactions. The first was surprise. Isn’t that word choice a little extreme? I wondered. As I considered it, though, I felt a light click on. Finally, I could describe a reality I knew well but never had a name for.

A rape culture is one in which societal beliefs normalize and perpetuate the crime. For those of us living in the United States, it’s hard to deny that the description fits. In Asking for It: The Alarming Rise of Rape Culture — and What We Can Do About It, Kate Harding digs into how this applies to women in Western countries. (The problem is more widespread, of course, but the author limited the scope of her work so she wouldn't have a never-ending book.) Though she, like me, initially was taken aback by the term “rape culture,” she’s embraced it, now using the ugly name to describe ugly truths.

Asking for It is hard to read because there are so many devastating, infuriating, and familiar stories of women who are not just victims of their attackers, but also of our culture. At the same time, it’s a necessary read. Through it, Harding highlights how we all contribute to rape culture, which, in turn, gives us the power to change our behavior.

Here are five of the many ways that rape culture is evident in our daily lives, as described in Asking For It:

I’d guess there are few (if any) among us who have never made an inappropriate or insensitive joke. It’s easy to write them off as if they don’t mean anything, but they can trivialize important issues. Harding doesn’t believe that rape jokes are “inherently unfunny,” but she argues that they have to be done in the right way. Bringing the issue to light is one thing, but making victims the butt of the joke? Please don't.

Too often how a woman was dressed or if she was acting flirtatious comes into the discussion of whether or not she was raped. It should be obvious that consent is the crux of whether or not a rape occurred, but unfortunately we still hear people make the assumption that a revealing outfit was to blame or that "she was acting like she wanted it." As we should all know by now, slut shaming like this hurts women.

Putting The Onus On Women To Prevent Rape

Women are unfairly expected to learn different rules to keep themselves safe than men are. “How can I go about my life without risking my safety?” (or some variation) is a constant question we must ask ourselves, Harding points out. More so than men, women are given safety tips: find strength in numbers, never let your drink out of your sight, avoid dark areas, be alert, etc. Men "can think rationally, control their own behavior, [and] act kindly toward other human beings," argues Harding. Why not teach them not to rape instead?

Going hand-in-hand with this idea that women should be vigilant about preventing rape is one that blames her when it happens. An Arizona judge actually told a victim who’d been sexually assaulted at a bar, “If you wouldn’t have been there that night, none of this would have happened.” That could be said of almost any crime, but our culture unfairly treats rape victims differently than it does those of murder, kidnapping, burglary, etc.

One in five women will be sexually assaulted in her life, so it’s sadly not surprising that I have multiple friends who have been raped. At the same time, I have zero friends who have reported the attacks. Although it's horrifying to me that the men responsible were never punished and have very possibly done the same to others, it’s hard for me to blame any victim for keeping silent. A statement like the judge’s above is a perfect example of the fight those who press charges can expect. Like Harding says, “the relatively tiny chance of bringing their rapists to justice must be weighed against the near certainty that they’ll be suspected of lying and treated accordingly.”

Leniency For The Accused

Our culture gives those accused of rape the benefit of the doubt far more often than it does the victims. Even though statistics show that 92 to 98 percent of those who report a rape are genuinely victims, Harding points out, there’s a tendency for us to be lenient towards the accused — more so than for rape than other crimes. We wonder if he didn’t understand that she meant no, how much she drank, and so on. Thanks to our fear of false accusations, uncommon though they may be, we regularly allow guilty rapists to go free.

More like this
We’ve All Had Bad Sex. Nona Willis Aronowitz Is Talking About It.
By Sophia Benoit
50 Books To Read With Your Book Club
By K.W. Colyard
10 Must-Read New Books Out This Week
By K.W. Colyard
Josh Peck Shows Love To Jennette McCurdy After Her Shocking 'iCarly' Revelations
By Radhika Menon
Get Even More From Bustle — Sign Up For The Newsletter