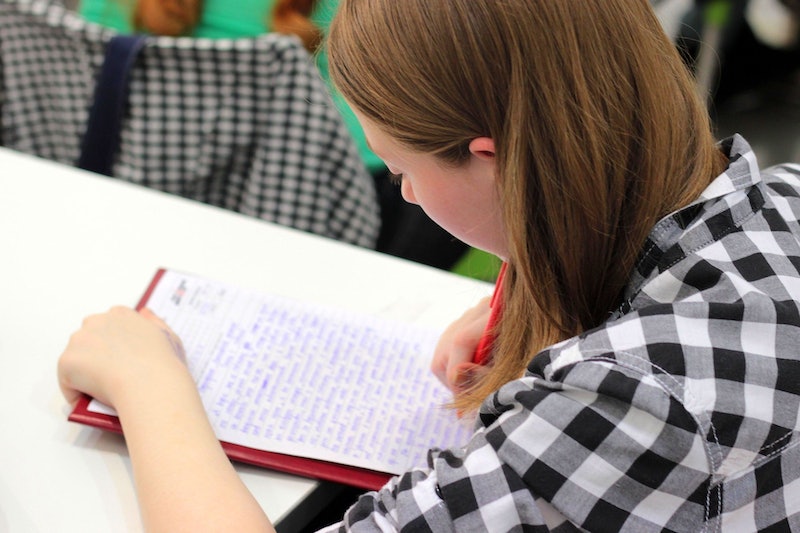 Turns out looking out the window during class might not be a sign of spacey daydreamers, but actually a natural way to combat stress. A new study finds that looking at nature improves kids' academic abilities. The study, published in the journal Landscape and Urban Planning, linked the greenness of the students's view to academic achievement and stress reduction. Looks like A Room With A View might not just be a novel that you read in school, but a new mantra for school design as well.

Previous studies have revealed that looking at trees may have all sorts of benefits, including being good for your heart, improving one's mental health, and even just making you feel healthier. Indeed, whenever I need to clear my head, there is no better remedy than a walk in the park. Previous studies have also "demonstrated positive associations between the greenness of high school landscapes and school wide academic performance." This relationship however could've be muddled by other factors, such as certain schools being better funded, or greener campuses allowing for students to spend more time outside doing physical activity and playing.

To test the direct effect of window views on performance and stress levels the researchers set up a randomized controlled experiment. In the study, 94 Illinois high school students at five high schools were randomly assigned to three different classrooms. One of the classroom had windows facing another building, another classroom had windows with a view of a green space, and the last had no windows at all.

The students performed 30 minutes of various classroom activities that would "induce a moderate level of stress" such as a proofreading test where they had to locate a random sequence of letters, a speech test where they gave a presentation on their dream job to two examiners, and a straightforward subtraction task. Then they had a 10 minute break where they remained seated, and were able to look out the window (but not allowed to fall asleep). To measure their levels of stress and mental fatigue, the participants completed questionnaires and attention tests bookending the tasks and after the break. Their heart rates, body temperatures, and levels of sweat were measured by an apparatus worn on their hands and wrists.

All participants performed equally after the first task. This was to be expected as students must limit their distractions by shutting out external stimuli in order to concentrate on the classroom activities. However, exerting this mental effort fatigues their ability to focus and prevent distraction. When the students were given a 10 minute seated break, those who had the window view of nature had a faster recovery from stress, and performed better on the attention tests than their peers. The exposure to natural light, but no greenery, had no beneficial effect on participants' performance. The green view had positive effects on both attention restoration and stress reduction which are distinctly separate pathways of the brain. Thus a natural view was found to have double the benefits!

These findings could be key to the future of school design and legislation. Giving students a view of trees and greenery could greatly improve the students's well-being and performance. Stress can greatly compromise performance and attitude, limiting one's success in school. A peaceful learning environment can make all the difference when it comes to education. This study gives us yet another reason to take a closer look at the school system and school designs in order to create an optimal learning environment going forward.