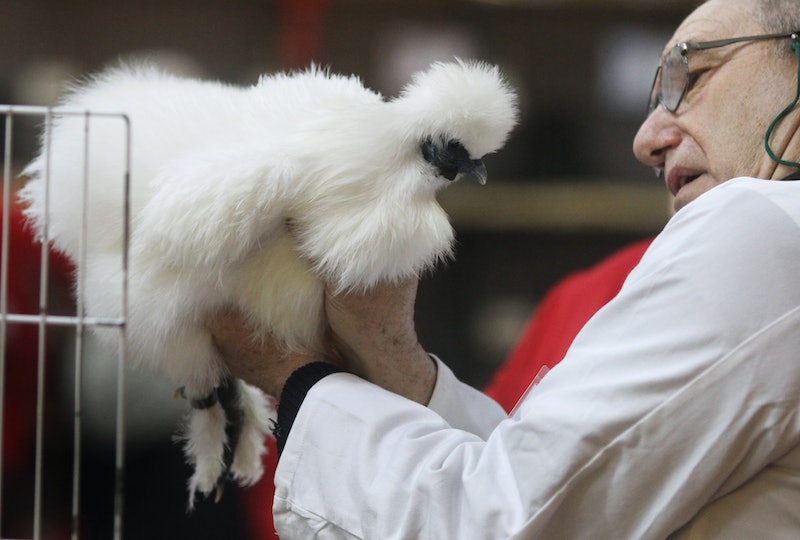 Though there have been many changes to the game of football over the years, there are certain components that have remained mainstays, such as brightly colored uniforms, scores of adoring fans, and cheerleaders. Cheerleading as a sport is so integral to the game that even the Puppy Bowl has its own cheerleaders. But while the presence of sideline supporters has remained, there is one big change at the 2016 Puppy Bowl: the cheerleaders are chickens, instead of last year's hedgehogs. Yes, you heard that right. Chickens.

Although it’s widely acknowledged that Super Bowl 50 will be worth the watch for fans of the NFL, Beyonce, Coldplay, and witty commercials alike, there is one demographic that was oddly looked over before 2004: animal lovers. It doesn’t take a genius to realize that some people would rather look at adorable fuzzy creatures than watch, well, pretty much anything, especially three hours of a sport that they barely understand. In the past, the Puppy Bowl has featured all sorts of cute critters, including a bird named Meep who Tweets live updates throughout the game, and a squad of hedgehog cheerleaders. Though I am no chicken enthusiast, I do appreciate their plucky resolve and wouldn’t mind having some of these especially cute chickens running around my place.

So, can you take one of these fluffy amazing chicken cheerleaders home to your coop? Let’s investigate everything there is to know about Puppy Bowl XII's new cheerleaders.

The Chickens Are Called Silkies

In an interview with International Business Times, Puppy Bowl executive producer Melinda Topotoff said that this year, there are a few "new participants," including a referee who is a skunk, a turtle who is a streaker (OMG, the greatness that is this show), and the chicken cheerleaders who are "actually Silkies." She went on to explain that the Silkies look like "Muppets," and also, "they look sort of like cheerleaders, actually." Perhaps Toporoff meant the puffy little creatures resemble pom-poms...

The reason the birds are so amazingly fluffy is because their feathers don't have "barbs" to hold them down, like regular chickens, according to farming blog Imagine Acres.

There are so many beautiful layers to these fuzzballs. Imagine Acres also explains that Silkie chickens have black bones and skin, a stark departure than a typical pale-skinned chicken, and also have blue earlobes.

The blog states that sSilkies are often kept as pets because of their inability to fly and generally docile nature. Though the Animal Planet website specifies that all of the puppy bowl players are adoptable from 44 shelters across the nation, it does not remark on the adoptability of the five amazing chicken cheerleaders, though I am really crossing all of my fingers here that I can bring one home someday.

More like this
Even The Royal Family Can’t Get Over Alessia Russo’s Backheel Goal For England
By Maxine Harrison
Talking About Mental Health In Sport Is Crucial, Says England Legend Karen Carney
By Sam Ramsden
13 Photos Of Formula 1 Racers Charles Leclerc & Carlos Sainz That Will Drive You Crazy
By Radhika Menon
Lewis Hamilton Turned Down A Role In 'Top Gun: Maverick' For This Surprising Reason
By Darshita Goyal
Get Even More From Bustle — Sign Up For The Newsletter