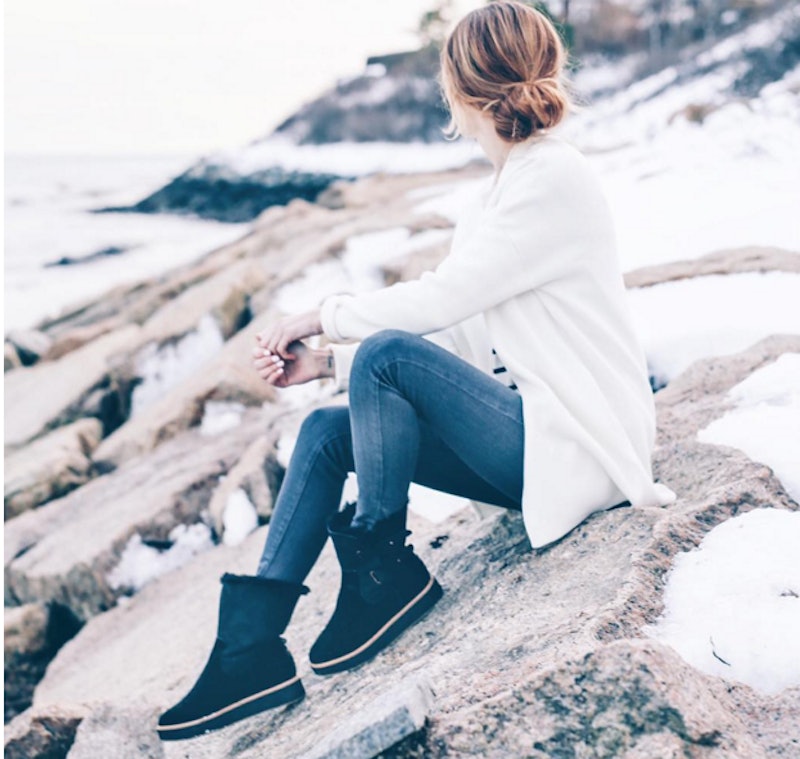 We all have habits that we don't love that we have. Some of us indulge in a little too much retail therapy, others procrastinate too much at work, while others might spend too much money on cocktails once Friday hits. But the good news is, there are ways to break bad habits and — even better — replace them with new ones. If you feel like you overindulge in things that set you back in certain aspects of your life, you don't have to live with it. If you were able to create the original bad habit, then you can just as easily create another one to replace it.

And that's the trick: You don't just erase a bad habit. Rather, you make things easier for yourself by replacing it with something better. Not only do you take out something bad from your life, but you cultivate a new practice that will help you become more well rounded and productive. But I know what you might be thinking: That bad habit isn't so easy to kick.

It might not be a breeze, but that shouldn't be your excuse for not trying. If you buckle down and tackle it systematically, you can totally do it. So without further ado, here are seven ways to break a habit by creating a new one.

1. Pinpoint What Triggers These Bad Habits

You don't just fall into a bad habit out of the blue — it's not like you became momentarily possessed and spent all of your grocery money on your Zara app in the span of five minutes. All of your bad habits are triggered by something, and once you figure out those triggers you can begin to block the bad habits.

According to lifestyle writer James Clear at Huffington Post, almost all of our bad habits stem from two things: stress and boredom. "Everything from biting your nails to overspending on a shopping spree to drinking every weekend to wasting time on the Internet can be a simple response to stress and boredom." Why is this important?

If you find yourself itching for a cigarette break, reaching for your fourth bag of chips, or fighting a yen to do some damage while online shopping, you can take a step back and pinpoint if you're bored or stressed at that moment, and not let the feeling take over. That's step number one.

2. Figure Out The Context Of The Bad Habit

Now that you know that your triggers are most likely boredom or stress, next you need to figure out the context of your habit. Leadership writer Jenna Goudreau from Forbes explained, "The first step to changing a behavior is to examine its context. When, where, how, why and with whom do you perform the habit?" If you feel like you've been drinking too much, maybe you should avoid picking up your phone between the hours of five and seven. If you feel like you've been on a body shaming spiral, see if it happens the most when certain people are around. By figuring these out, you could make the conscious effort to avoid those triggers and make the habit-breaking easier for you.

3. Find Out What You'd Like To Replace The Bad Habit With

Saying you'll simply delete a bad habit isn't realistic — what you need to do instead is replace it with a good one. And in order to do that, you need to come up with a game plan on what to replace it with. Clear offered, "You need to have a plan ahead of time for how you will respond when you face the stress or boredom that prompts your bad habit."

For example, do you feel like procrastinating at work? Instead of popping over to Instagram, give yourself five minutes to read a fun industry-elated article. Or do you have an urge to online shop because you're bored? Try tiding a part of the room you're in instead.

4. Schedule Reminders For Yourself About Habit-Breaking

Even though you're doing well, there will definitely be moments on this journey where you'll slip and revert back to your old habits, so you need something that will help replace your broken will power. Lifestyle writer Melanie Pinola from Lifehacker suggested, "Try setting up reminders in your calendar for yourself for your weakest moments." For example, are you tagging along with your friends to the bar when you've promised yourself you'll hit the gin a little less? Schedule a reminder on your phone to pop up at 10 o'clock that reminds you to do your "replacement good habit" instead. This way you're still being held accountable even when your will power has dwindled down to zero. No more excuses!

5. Shoot Down Any Devil Advocate's Thoughts

You know how when you really want to indulge in a bad habit, you conjure up a "one more time" type of dialogue. As in "this will be the last time I do this," or "I'll be better starting tomorrow." No. Don't let yourself do that.

Which is something you already know, but chances are don't know how to stop. Lifestyle writer Catherine Pearson from Huffington Post suggested looking at those statements like an outsider, and reacting to them accordingly. "When you deliberately tune into those 'permission-giving' thoughts and look at them critically much like an outside observer might, you're better able to call yourself out and hold yourself accountable when they strike again." She suggested saying the statements out loud, and then looking at them as if you're friend just said the statement about their own bad habit. Chances are you'd block them from continuing and offer up the replacement good habit, instead.

6. Draft A Buddy To Help You Stay On Track

If you're having a rough time batting away your bad habit, try enlisting a friend to help you out. For example, every time you want to body shame yourself, text your friend about how you're having these negative thoughts and they'll remind you what you're supposed to do instead. Like name three things you love about your body.

Dr. Marie Hartwell-Walker, psychologist and counselor, explained, "Being accountable to others is a powerful incentive to keep on keeping on. By both giving and receiving support, you keep the goal in focus." It's always easier to achieve your goals with a little bit of help.

Life gets a little hard when all you do is deny yourself things. So to counteract that, make sure to reward yourself every time you reach a small milestone with your habit-breaking. Why is this important? According to career development site Mind Tools, "The reason rewards are important is because when you stop the old behavior you won't get that all-important dopamine surge; however, the reward will give it instead. Over time, your brain will start to associate this new, positive behavior with the dopamine surge coming from the reward." So every week you make it keeping to your new habit, offer yourself a little treat. It'll keep you going.

Whether you want to cut back on your procrastination, stop yourself from stress shopping, or cut back on a bad habit like smoking, try these tips out and you might find the whole process a lot easier!

More like this
6 Abortion Advocates To Follow On TikTok
By Sara Youngblood Gregory
The 6 Best Hydro Flask Alternatives
By Maria Cassano
The UK Abortion Laws In 2022, Explained
By Sophie McEvoy
The Best Underwear For Sensitive Skin, According To A Dermatologist
By Alexa Vazquez
Get Even More From Bustle — Sign Up For The Newsletter