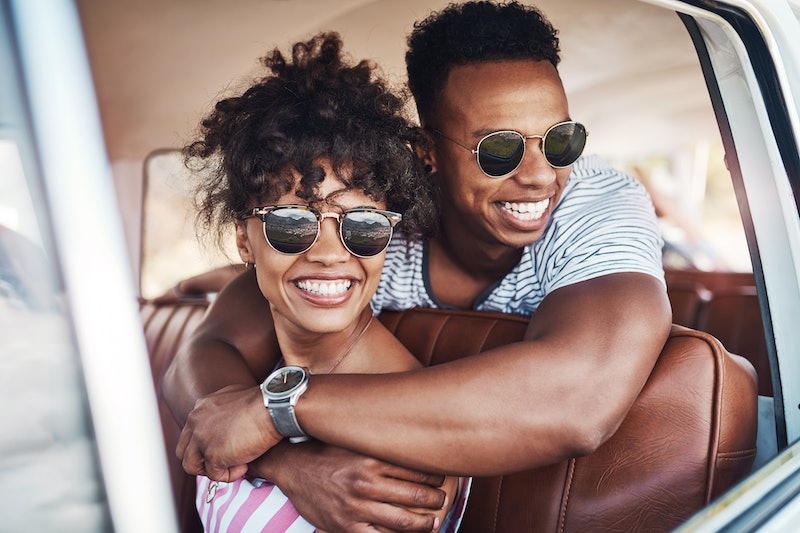 As detailed by the law and the many accidents that have occurred as a result, nobody should text while driving. And though this should go without saying, nobody should have sex while driving, either. But evidently, we’re all rebels in our own right and foolishly do so anyway. At least that’s what a recent survey from DriveMode, an automotive technology company, discovered when polling over 1,000 Americans as to what they do in their cars.

These results proved surprising, with a very high amount of people having done so. One in six people admitted they've engaged in sexual activity while driving — no, not parked, driving. Since sexual activity can mean many things, one can only assume — or hope – that no actual penetrative sex has occurred while driving because like, how?

Since potentially getting caught in a sexual act is a huge turn on for many, I looked into other popular yet strange locations people like to get it on. After doing some research, here are some of the most popular places.

1. In The Laundry Room

Getting dirty in a place where you clean can be a huge turn on. While likely due to the vibrating sensation of the washing machine, the laundry room is a place 29 percent of over 1,500 of those surveyed by Cosmopolitan have enjoyed having sex.

2. In Their Parents’ Bedroom

3. On The Kitchen Table

Not as surprising, people also like to clear their table of plates, vases, and other tablewares to have raucous sex on the surface you’re meal was just sitting on. Almost half of those surveyed by Cosmo (48 percent) confessed to engaging in naughty kitchen table sex.

Whether camping or lost on your way to grandma’s house, Cosmo found that 49 percent of their sample have had sex in the woods. While this is likely due to a camping trip and not the the red-hooded tale I alluded to earlier, a little red riding hood roleplay couldn’t hurt.

A few years back, Durex released the results of a survey to celebrate National Orgasm Day, and asked where respondents wanted to – and have already – had sex. A surprising result found by the survey was that 22 percent of people wanted to give fitting room sex a shot. And according to online testimonials, it’s very easy to do so.

6. At A Church Or Cemetery

While one is certainly more strange than the other, statistics from the same survey revealed that seven percent of people fantasized about having sex in a church and eight percent wanted to have sex in a cemetery. As for those who have actually done it? Well that’s much lower, at three percent.

7. In The Subway And/Or A Taxi

The survey also found that people like to have sex on public transit: 10 percent of those surveyed wanted to have sex on the subway and 16 percent want to do it in a taxi. Some advice (if I may): tip extra for the clean up.

More like this
Are Gemini & Scorpio Compatible In A Relationship?
By Kristine Fellizar
This TikToker Has Genius Advice For Boosting Your Dating Confidence
By Lexi Inks
15 Flirty "Thinking Of You" Texts That’ll Make Your Crush’s Day
By Lexi Inks
The “Rules For Dating” TikTok Trend, Explained
By Lexi Inks
Get Even More From Bustle — Sign Up For The Newsletter